Liberalism Is Killing The Entertainment Industry 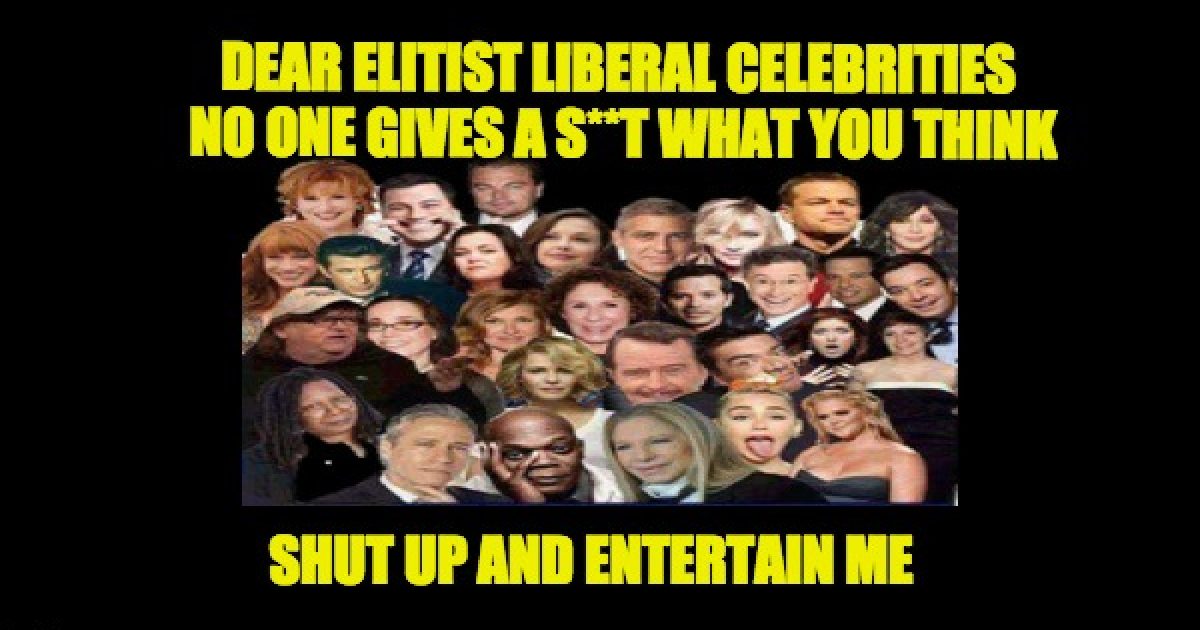 Liberalism is fast destroying the entirety of the entertainment sector in the U.S. today, from movies and TV to sports, to publishing. But the amazing thing is that these media sectors don’t care even a tiny bit that their popularity and finances are eroding faster than a sand castle at high tide.

A new poll by McLaughlin & Associates and the Media Research Center reveals a shocking statistic:  Fully 44 percent of Americans are less likely to watch sports and entertainment shows “because they have become too political.”

The number grows exponentially when respondents were asked what they want to see in their entertainment choices. 75 percent said that they “do not want to be bombarded with partisan political messages.”

These results are being seen across the entertainment industry, as this survey shows.

The National Football League’s regular season ratings dropped by almost 10 percent last season and that was on top of the nearly 20 percent that the ratings fell in the 2016 season. And this is as anti-American protests continued to grow across the league as millionaire players and billionaire owners told America how much they hate our country, our soldiers, our police, and our laws and history.

The league itself is in serious jeopardy after an abysmal 2017 season.The NFL is not alone. The 2018 Academy Awards “Oscars” show saw its worst-ever TV ratings, falling by 19 percent over 2017. The telecast suffered the worst ratings in the show’s history surpassing the low seen with 2008’s 21.9 percent share47″>

According to the survey, 47 percent, of respondents who didn’t watch the Oscars said they were “tired of these shows being full of political statements” or “knew some of the presenters and winners would use the time to share their political agenda.”

“Many people have speculated that it is the liberal politics in sports and entertainment shows that is driving their audiences away. We now have evidence that proves this is true,” MRC president Brent Bozell said in a statement.

“It is no coincidence that viewership of this year’s Oscars ceremony hit an all-time-low,” Bozell added. “The NFL and liberal sports networks like ESPN are completely at odds with their viewers’ interests and their ratings reflect it. Perhaps the sports and entertainment industries will finally heed this warning before Americans tune out for good.”

TV ratings have also seen a major decline over the last few seasons. As reported last year by Inside Radio:

A recent report from Wall Street media analysts MoffettNathanson paints a disturbing picture of the state of TV viewership. Entitled “November C3 Ratings – Worse Than We Thought,” it shows Nielsen ratings for broadcast and cable TV continued to slide in November, with broadcast networks tumbling 16% year-over-year in prime time and 17% in total day, among persons 18-49.

“When this year started, given the artificial boost to 2016’s results following Nielsen’s change to NPX, we were deeply concerned about C3 ratings,” the report says. “The fact is, ratings declines in 2017 were even worse than we imagined with seven of the past eleven months declining double digits.” NPX refers to Nielsen’s Dec. 2015 National Panel Expansion; C3 ratings are the TV currency metric and reflect commercials watched both live and within three days of DVR playback.

While we know that the NFL has witnessed crashing ratings, sports broadcasting otherwise has also seen the bottom falling out.

The 2018 Winter Olympics in PeyongChang, South Korea, for instance, generated disaster ratings for NBC. Once all was said and done it was learned that these Olympics were the lowest rated Winter games ever.

On its last Saturday, the often tractionless PyeongChang games hit a new low, dipping 5% from the previous rock bottom of February 23 with 8.7/16 metered market results on both NBC and NBC Sports Networks. As harsh as that is, last night’s results were up just over 1% from the final Saturday of Sochi 2014. A low for those Russian-based games in the early numbers, that February 22, 2014 primetime coverage on NBC-only went on to dribble in a weak 13.3 million viewers.

That small victory over 2014 may bring a toast or two around NBC HQ this morning but the overall reality is that the 2018 Winter Games are going to be the lowest rated ever with a drop of nearly 10% from the previous low of Sochi. Hell, Saturday to Saturday, last night was down 15% in metered market ratings from February 17, which was a low at the time.

Even as NBC has melded their numbers with NBCSN with simultaneous live primetime coverage, the lessons of a changing media landscape can’t help but bring a chill as NBC’18 to NBC’14 has often seen double-digit declines overall these games. Looking at the final Saturday of the XXII Winter Games to last night on NBC only, PyeongChang dropped 10% from Sochi’s last night of tape delayed primetime competition.

In the meantime, others are trying to rush in and fill the vacuum, at least as far as football goes.

College sports still hold high interest among Americans — and it can’t go without notice that few college teams are allowing all these anti-American protests — so, at least as far as football is concerned, it seems clear that the American public is not turning against football as a sport. Fas are only dumping the politicized NFL.

But two major efforts to start new football leagues are underway to try and fulfill fans’ need for football.

In one case is Charlie Ebersol who is working to get fans interested in a new league:

Charlie Ebersol, who directed a documentary on the XFL that aired last year as part of ESPN’s 30 for 30 series, announced Tuesday that his league, the Alliance of American Football, plans to debut Feb. 9, 2019, the week after Super Bowl LIII. The season will run 10 weeks and will have 50-man teams.

And, of course, the other case is wrestling mogul Vince McMahon:

Many thought, after a year of plummeting ratings and political controversy, that someone might throw their hat in the ring, and challenge the NFL’s monopoly over professional football in America.
Well, that moment has arrived.

According to CBS, “WWE founder and chairman Vince McMahon is set to announce that he will make another attempt at starting a professional football league,” sources told ESPN.

As these new sports efforts wind their way through the birthing process, the one thing they have in common is that their sponsors say that politics will be left in the locker room and won’t be seen on the field.

The rest of the entertainment industry should learn this lesson, but if they don’t do it quickly it will be too late. But something tells me that their social justice nonsense and their virtue signaling to each other is far more important than their jobs.