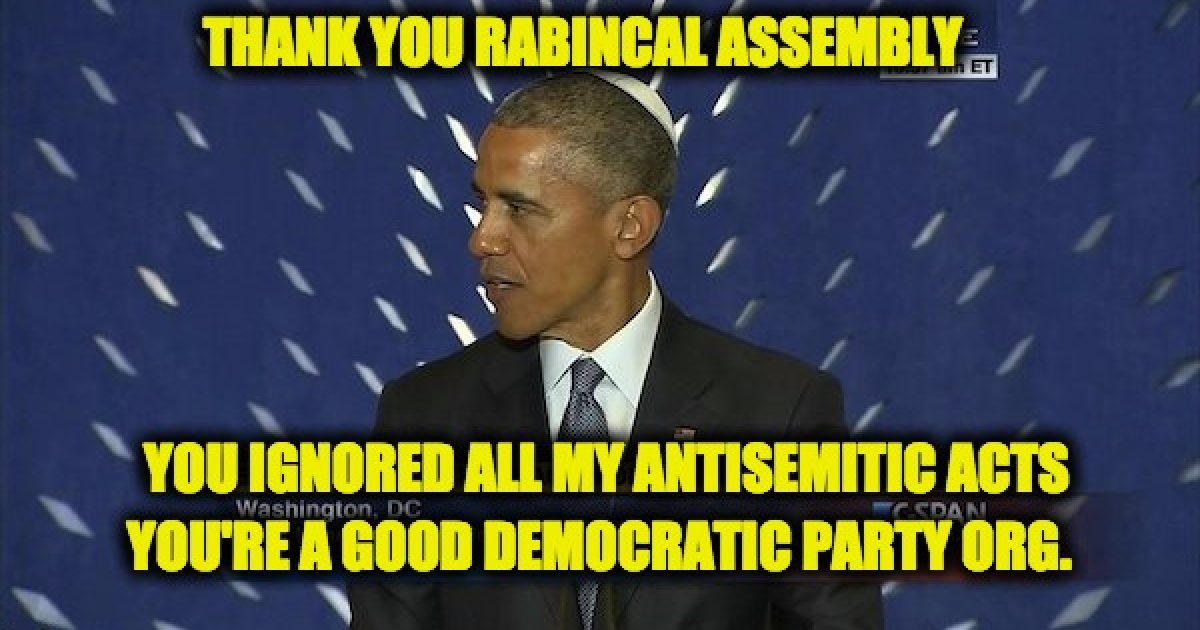 On Wednesday, a coalition of major rabbinical groups announced it will not hold an annual conference call with the president because of how Donald Trump responded to the violence in Charlottesville, Virginia earlier this month. The rabbinical groups — which include the Central Conference of American Rabbis, the Rabbinical Assembly, the Reconstructionist Rabbinical Association and the Religious Action Center of Reform Judaism. The groups represent the Conservative, Reform, Reconstructionist movements of Judaism.

“We have concluded that President Trump’s statements during and after the tragic events in Charlottesville are so lacking in moral leadership and empathy for the victims of racial and religious hatred that we cannot organize such a call this year,” the groups wrote in a letter released on Wednesday.

“The President’s words have given succor to those who advocate anti-Semitism, racism, and xenophobia.”

“Responsibility for the violence that occurred in Charlottesville, including the death of Heather Heyer, does not lie with many sides but with one side: the Nazi, alt-right and white supremacists who brought their hate to a peaceful community,” the groups said in their statement Wednesday.

“We pray that President Trump will recognize and remedy the grave error he has made in abetting the voices of hatred,”

Note: The Agudath Harabonim the organization of Orthodox Rabbis did not sign the letter above, nor did they announce a cancellation of the annual phone call.

I address the letter below to the Rabbinical Assembly because it is an organization of the Rabbis of Conservative Judaism–the Jewish movement where I pray.

I defer to your wisdom when it comes to issues of Torah and Jewish law, but as someone who studies politics for a living, it is too easy to see through the Rabbinical Assembly’s latest action and letter to President Trump.

Your overtly political and public response to President Trump’s Charlottesville words makes me ashamed to be a Conservative Jew.  In the eight years before Trump took office, America had the most anti-Semitic President since FDR, but the Rabbis of the Conservative Movement was silent, most probably because like Reform Jewry, Conservative Judaism tends to worship the Golden Calf of liberal politics. The letter and action made in your names shows your Antisemitism to be of the Johnny-come-lately variety. You are trashing Trump for political purposes only.

I am not saying that parts of what the President said weren’t stupid and insensitive. But your letter even identified the wrong part of what he said as bad.  When the POTUS said there was good on both sides he was wrong.  There are good people who believe Confederate statues should stay, however, they weren’t in Charlottesville. NO ONE, not one person who decided to march alongside people who were carrying the swastika and Hitler’s Nazi flag could EVER be considered “good.”

But your objection to Trump talking about violence on both sides is very wrong. In fact, many of the videos on YouTube suggest that it was ANTIFA that started the violence:

What is also upsetting is that while the Rabbinical Assembly never cared about anti-Semitism spewing forth from the White House before a week ago Tuesday.

There was nothing from the Rabbis of the Rabbinical Assembly when Obama surrounded himself with anti-Semites such as Chas Freemen, Zbigniew Brzezinski, or General McPeak who all spread the anti-Semitic stereotype that Jews control the U.S. Government, or that he used Al Sharpton (who incited two different anti-Semitic pogroms in NY City)  as an unofficial advisor.  You said nothing when Obama gave the Presidential Medal of Freedom to anti-Semites such as  Bishop Tutu who said, “Jews Think They Own God” and to Mary Robinson who ran the Anti-Semitic Darfur conference on Human Rights, Toni Morrison who resurrected the Anti-Semitic Blood liable to against Israeli Jews, and Rev. Joseph Lowery who preached the anti-Semitic canard that the “powerful Jewish lobby.” It didn’t seem to matter to the Rabbis of Conservative Judaism when Barack Obama said he supported the anti-Semitic Occupy Wall Street movement. 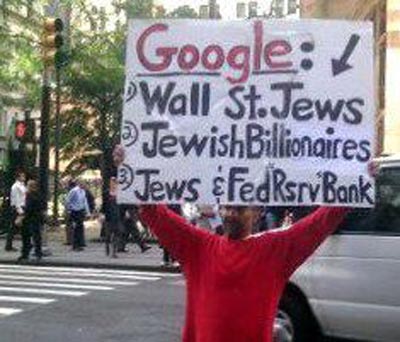 Maybe the Rabbinical Assembly lost its internet access because the didn’t object when in a straight cash deal the Presbyterian Church sold land they owned in Jerusalem to Israeli Jews and Obama objected. The American president declared in so many words that Jerusalem should be Judenrein.

When Muslim terrorists attacked the Kosher Supermarket in Paris as Jews on a Friday as Jews were making their purchases for Shabbos Dinner, White House Spox Josh Earnest, and State Department Spox Jen Psaki each refused to recognize that it was an attack on Jews, prompting AP’s great State Department correspondent Matt Lee to ask Psaki, “Yeah, but if a guy goes into a kosher market and starts shooting it up, you don’t – he’s not looking for Buddhists is he?” Maybe the Rabbinical Assembly thought the WERE looking for Buddhists because there was no publicly issued, angry letter to the President.

During the discussions about the Iran deal members the Rabbinical Assembly sat on their hands when President Obama was accused of Antisemitism in a meeting with Jewish Leaders. The silent when William Daroff Senior Vice President for Public Policy & Director of the Washington office of The Jewish Federations of North America tweeted during a conference call with Obama about the Iran deal:

During that same call, Lee Rosenberg of AIPAC questioned the President’s statement comparing people who object to the Iran deal with those who supported the invasion of Iraq. He pointed out that many anti-Semites falsely claim the Jews pushed Bush into invading Iraq. Obama believed that canard to be true. He explained that Netanyahu supported the Iraq invasion (true).

It didn’t matter to Obama or the Rabbinical Assembly that Netanyahu wasn’t the premier at the time — he was a private citizen. The man who was prime minister, Ariel Sharon, strongly urged Bush not to invade Iraq, arguing correctly that if Saddam were removed, “Iran, a far more dangerous player, will be rid of its principal enemy and free to pursue its ambitions of regional hegemony.” But that didn’t stop Obama from spreading anti-Semitism and the Rabbinical Assembly from ignoring the anti-Jewish hatred of a Democrat.

There is no problem with criticizing President Trump. As I suggested above the president deserves criticism on the one issue outlined above.  And I agree that America expects more from its president and that in this particular case President Trump under-delivered on his promise to be a leader.

But the fact that you worship the Golden Calf of Democratic Party politics, by sermonizing your agreement with their policies, and only criticize Republicans is just plain disgusting.

After Rosh Hashana and Yom Kippur Jews always ask their friends, “What was your Rabbi’s sermon about.” During the Obama administration, I began to notice a new tradition enacted by many Conservative Rabbis. At least one of their sermons during the High Holidays pushed President Obama’s policies.  For example when President Obama was promoting class war fare between rich and poor, and claiming well-off Americans weren’t paying enough taxes. Conservative Rabbis gave sermons about “fairness” and how everyone in America had to do their part. If Conservative Rabbis spoke about giving more charity, you would be echoing a major theme of all Jewish holidays, tzedaka. However, to most observers I spoke to the sermons were about economics and redistribution of wealth-type doing their part.

In 2009 many Rabbis spoke of the need for Obamacare, 2010 saw Rabbis explaining that  Obama didn’t really hate Israel.  Each year in many (but not all) Synagogues across this country the President’s policies received a positive word in sermons across America.

The fact that the Rabbinical Assembly was overly critical of a Republican president while ignoring the real anti-Semitic acts of a liberal Democratic one and worship the golden calf of Democratic Party politics by endorsing that Democratic President’s progressive policies from the pulpit, is proof that your motives in sending a letter to this president are purely political.

Perhaps the worst move of the Rabbinical Assembly is your refusal to even talk to President Trump just before the “Yamim Noraim” (the High Holidays). By canceling the phone call, you destroyed a teaching opportunity. You denied the President an opportunity to hear how his words were hurtful,  and possibly to recognize his “Chet” (sin) and do ‘T’shuvah” (repent), which is something that Conservative Rabbis taught me was wrong. As the word Rabbi itself means teacher, it is clear that the Rabbinical Assembly action is not befitting of a Rabbi/teacher.

When the unfair one-sided political positions of the Rabbinical Assembly filters down to individual congregations, more and more Jews will recognize the “ruse” of Torah learning dressed as politics from the pulpit. Some Rabbis like mine, for example, work hard to make people feel comfortable despite the political differences. However, others in my large “network” of Jewish readers and Jewish friends feel isolated because of the pulpit politics pushed by the Rabbinical Assembly. If you haven’t seen it yet you will soon notice that many in your congregations will stop coming to services, or will look for non-political synagogues because of the politics pushed by the Rabbinical Assembly simply makes them feel unwelcome. And that is the biggest “shanda”(scandal) of all.

One more thing.  Before you complain that this post is a “shanda fur die goyim,” (an embarrassment in front of the non-Jews)  understand that the letter you sent was delightfully announced and posted by every anti-Trump website and media vehicle across the world whether they were Jewish in nature or not.