Pelosi Claims Letting the Election Decide About Trump Is Dangerous 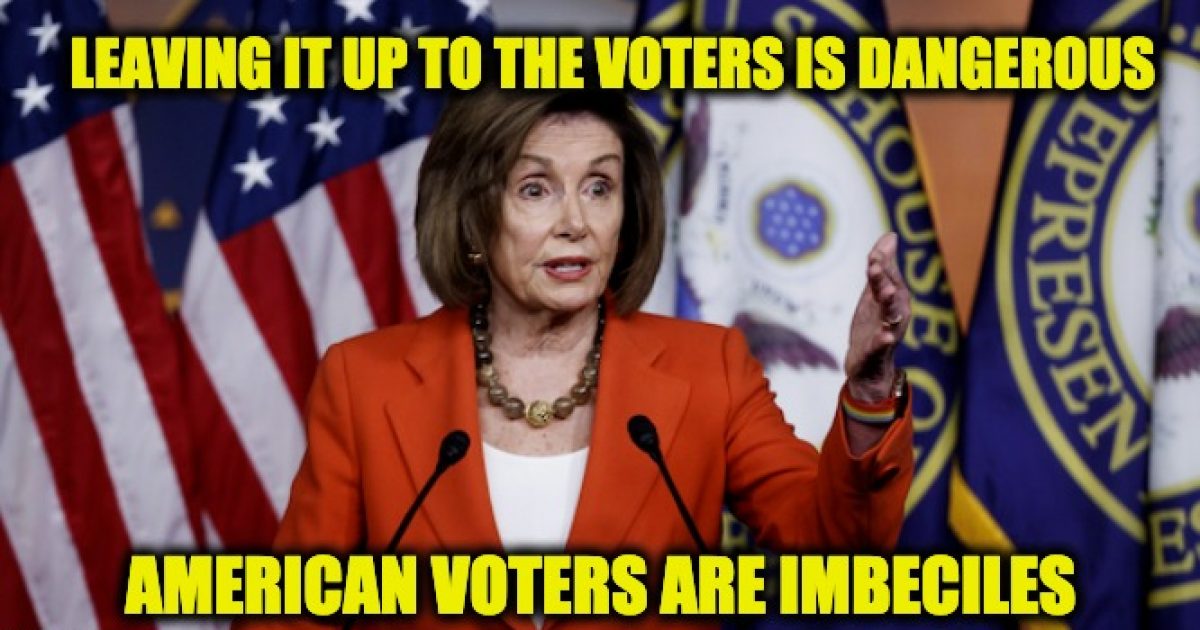 Nancy Pelosi might as well change her job description to “Speaker of Arrogance” She revealed no concern for the Constitution at all when she said: “The weak response to these [impeachment] hearings has been, ‘Let the election decide.’ That dangerous position only adds to the urgency of our action, because POTUS is jeopardizing the integrity of the 2020 election.

Why Nancy, because he will win?

So to review: Pelosi thinks that allowing people to vote for the President is  a “dangerous position.” She even claimed that the “facts were uncontested.” She is delusional and is waging a war against the United States. President Trump has never “jeopardized” the integrity of the elections. She and her Democrat cronies have, however. Apparently, she’s never actually read the Constitution or wants to twist it to her own liking.

She sent out this letter to her Democratic Caucus.

As we enter this pre-Thanksgiving week, we must extend the Continuing Resolution to keep government open and advance our legislative agenda to meet the needs of the American people.

Thank you to the many Members who participated in our Speaker’s Meeting on Jobs.  The presentation of the challenges facing America’s working families and the solutions presented by Transportation and Infrastructure Committee Chairman DeFazio and Energy and Commerce Committee Chairman Pallone helped advance our infrastructure legislation.  The discussion on USMCA was constructive and will continue this week.

At the same time we legislate, we continue to investigate and litigate, as the impeachment inquiry proceeds.

Last week, the country was impressed by the valor and patriotism of the dedicated public servants and career diplomats, appointed by the President, in speaking truth to power.  This week, we will hear from additional witnesses who will courageously expose the truth and defend our democracy.

The facts are uncontested: that the President abused his power for his own personal, political benefit, at the expense of our national security interests.

The weak response to these hearings has been, “Let the election decide.”  That dangerous position only adds to the urgency of our action, because the President is jeopardizing the integrity of the 2020 elections.

There are also some who say that no serious wrongdoing was committed, because the military assistance to Ukraine was eventually released.  The fact is, the aid was only released after the whistleblower exposed the truth of the President’s extortion and bribery, and the House launched a formal investigation.

None of us comes to Congress to impeach a President, but rather to make progress for America’s working families.  However, our first order of business is our oath to support and defend the Constitution from all enemies foreign and domestic.  As such, we are custodians of the Constitution and, For The People, defenders of our democracy.

Thank you for your patriotic leadership.

Pelosi issues rebuttal to GOP talking point in Dear Colleague letter: "The weak response to these hearings has been, 'Let the election decide.' That dangerous position only adds to the urgency of our action, because POTUS is jeopardizing the integrity of the 2020 elections." pic.twitter.com/L3RFdcSSHb

The Democrats, primarily Petulant Pelosi and The Bug-Eyed BSing Burbank Barrister are doing everything in their corrupt power to delete YOUR VOTES for Trump. Disenfranchising millions of Americans who voted for President Trump is going to release consequences that these idiots never imagined and likely don’t want.

The Democrats claimed that the Republicans were “fully represented” in the closed-door impeachment hearings.  Represented is far different from allowed to participate- which they were not. It’s why that group of Republicans crashed the party and camped out when Schiff-for-brains got mad and left the room. He’s still at it, by the way, interrupting witnesses from answering GOP questions.

Nunes: Did you discuss the July 25 call or July 26 call with anyone outside the White House?

Vindman: George Kent, and someone in the intelligence community I'm not going to name.

Schiff interrupts to "protect the whistleblower."

In one instance last week he gavelled a Congresswomen down so much that Devin Nunes stepped in to rebuke him. (We wrote about that here). Her questions totally smashed the Democrat’s witness.

And Pelosi has the chutzpah to claim that “Let the election decide” is “dangerous.” What she is really saying is that the American voters are idiots.

It’s the Democrats are who are dangerous along with their sycophants in the mainstream media. And the more they are allowed to continue this charade, the more dangerous they become.