Leftwing Media Bashes America On Independence Day — Are You Surprised? 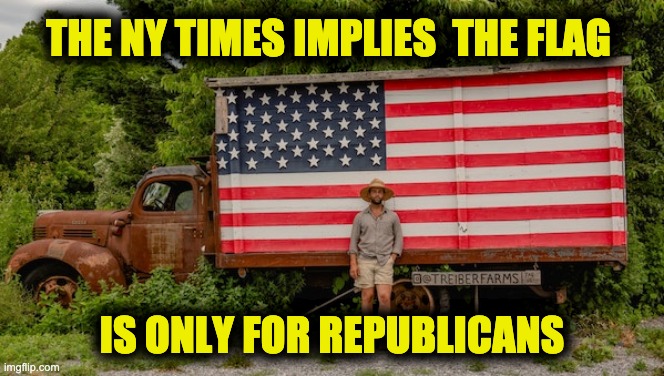 Happy Independence Day to everyone who loves America! That clearly doesn’t include some sourpusses in the Corporate Media who hold only disdain for the good ol’ U.S. of A.  leftwing media bashes America.

They’re not so keen on Patriots who love this country, either. After all, they might live in “flyover country” and even be *gasp* Republicans!

The leftwing Corporate Media is making every attempt to remind you that America is politically divided — but they’re the ones fomenting division. They’re dividing Americans by race and political affiliation on a day that we are supposed to be celebrating this land of liberty. It’s rather disgusting but expected from the media elite.

On Saturday, the New York Times politicized the flag by saying that “flying the American flag from the back of a pickup truck” could be seen as a clue to a person’s political affiliation. In other words, Democrats aren’t likely to fly the flag. Of course, they’re not likely to own a pickup truck, either.

Today, flying the American flag from the back of a pickup truck or over a lawn is increasingly seen as a clue, albeit an imperfect one, to a person’s political affiliation in a deeply divided nation. https://t.co/TODmHEmPsO

Not to be outdone, the publicly-funded “news” organizations jumped in on the anti-American fun.

NPR published an entire thread with the text of the Declaration of Independence, but not before crapping on it as a document “with flaws and deeply ingrained hypocrisies” and stated that it used “a racial slur” against Native Americans.

The document also includes a racist slur against Indigenous Americans.

Author David Treuer, who is Ojibwe, says there is a lot of diversity of opinion and thought among Native Americans — a community of more than 5 million people — about the document’s words. pic.twitter.com/K64UXhMKDA

(Grammar, punctuation and spelling as provided by the National Archives.)

When the tweets hit the portion that NPR deemed “problematic,” they issued a trigger warning to readers about the alleged “racial slur” used in the Declaration.

and has endeavoured to bring on the inhabitants of our frontiers, the merciless Indian Savages, whose known rule of warfare, is an undistinguished destruction of all ages, sexes and conditions.

PBS decided that rather than unite the country around July 4, it was a much better idea to further fan the flames of division based on race by including the celebration of Juneteenth and have a performance of the “Lift Every Voice and Sing” — the so-called “Black National Anthem.”

PBS has divided opinion with its decision to have Vanessa Williams sing the ‘Black National Anthem’ during its July 4 celebration, in a nod to Juneteenth being made a federal holiday.

The singer and actress, who was the first black woman to be crowned Miss America, will perform the song ‘Lift Every Voice and Sing’ while hosting PBS’s 41st ‘A Capitol Fourth’ annual celebration, which airs Sunday.

The song was first written as a poem in 1900 by NAACP leader James Weldon Johnson and has long held the nickname as the ‘Black National Anthem.’

Williams said her performance of the song will not only honor the nation’s traditional Independence Day, but also the country’s newly designated holiday.

‘It’s in celebration of the wonderful opportunity that we now have to celebrate Juneteenth. So we are reflective of the times,’ she told the Associated Press.

The song is not replacing the US National Anthem, with Grammy Award-winning singer Renée Fleming opening the show with a special performance of the traditional tune.

It’s good that they didn’t exclude the traditional anthem, but it’s still a divisive move.

This institution of Juneteenth as a holiday is just separating how we celebrate America and what we celebrate. It’s destined to become the “woke” Independence Day for people who want to focus on the dark points in the history of the United States rather than the values on which this country was founded or the hundreds of thousands of Union soldiers who fought to end slavery and make Juneteenth happen.

We’re supposed to put these divisions aside and celebrate the Greatest Country on Earth — the “land of the free and the home of the brave.” This is not a country based on race, but on ideals written down by men a helluva lot smarter than the yahoos over at NPR, PBS, or NYT. Have we always lived up to those ideals? No, but we continue to push on towards that “more perfect union.”

Still, name a single country in the world with the same commitment to freedom that America does. I’ll wait…

Back in 2002, the incomparable Aretha Franklin performed “The Star-Spangled Banner” and then segued into “Lift Every Voice and Sing.”

Beautiful. And not divisive. Imagine that.