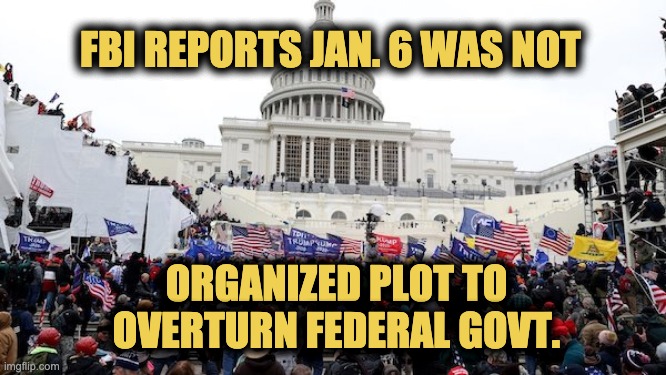 It all comes down to the simple fact that there is a world of difference between a ‘riot’ and an ‘insurrection.’ This distinction with a difference strikes at the very heart of what many of us have been asking from the beginning.

It should go without saying that — ever since Comey & Co. set fire to their institutional reputation — we are slow to accept any official narrative of the FBI. But when they tell us something that contradicts or undercuts the leftist story they so obviously want us to believe, our ears perk up.

The FBI has just released information that turns everything the left and the MSM taught the public on its head. Let’s recap the official events as they have been told us up to now to see just how far they are from the facts our law enforcement is giving us some 8 months after the fact.

The Jan 6 Narrative … until now

If the only information you had to go on were official statements from Pelosi, from surrogates in Biden’s administration, or by the complicit media who, as we recall, played their own role in ‘fortifying the election’ in Joe’s favor, you might expect the nation was crawling with malevolent militia groups who hatched a plot to converge upon DC in early January to overthrow a government.

That was always hard to square because none of the people arrested on site there were packing heat. But authorities ignored that fact as they rounded people up, destroyed lives with innuendo by declaring everyone even remotely connected with the days’ events as enemies of the state, and ‘guilty’ without so much as a right to answer their accusers.

They were not allowed to make bail, and many were held in solitary confinement… while actual violent rioters for pro-left causes routinely avoid any criminal consequence whatsoever — including those who attack law enforcement officers.

The Capitol was locked down. DC was militarized. And massive government resources were turned against what we were assured was the greatest threat to our government — domestic terrorists. Stand-down orders were given to our military as they ‘weeded out extremism

.’(That last one was kind of a weird take since the Space Force bro who denounced Communism on a podcast in May has since been told his final day of work is next month. Space Force Commander ‘Temporarily Reassigned’ After Saying Marxism Has Infiltrated The Military They kept the Marxists and gave the patriot the boot.)

The Facts As Now Reported By The FBI

The FBI has found scant evidence that the Jan. 6 attack on the U.S. Capitol was the result of an organized plot to overturn the presidential election result, according to four current and former law enforcement officials.

Though federal officials have arrested more than 570 alleged participants, the FBI at this point believes the violence was not centrally coordinated by far-right groups or prominent supporters of then-President Donald Trump, according to the sources, who have been either directly involved in or briefed regularly on the wide-ranging investigations.

“Ninety to ninety-five percent of these are one-off cases,” said a former senior law enforcement official with knowledge of the investigation. “Then you have five percent, maybe, of these militia groups that were more closely organized. But there was no grand scheme with Roger Stone and Alex Jones and all of these people to storm the Capitol and take hostages.”

…FBI investigators did find that cells of protesters, including followers of the far-right Oath Keepers and Proud Boys groups, had aimed to break into the Capitol. But they found no evidence that the groups had serious plans about what to do if they made it inside, the sources said.

How can we tell Reuters was reluctant to share that news? Because they made sure they STILL painted the events of Jan 6 in the worst possible light, even if they had to lie to do it.

Those falsehoods included: calling Jan 6th the ‘most violent attack’ since 1812, claiming four people died, and another the following day (implying those deaths were connected in some way to violent actions on the part of the civilians involved). They falsely called Trump’s speech ‘incendiary’ (peacefully and patriotically) and that he demanded lawmakers reject Biden’s victory — wrong again. This was about recertification and unresolved disputes concerning the certification process that could have been addressed (per Ted Cruz’s proposed solution) before the next Presidential Term.

As we have said in our ‘bombs on airplanes’ piece, the talking point about the violence and deaths of Jan 6 has long since been debunked.

Still, committee Chairman Bennie Thompson, a Mississippi Democrat, said in his opening remarks that “seven people lost their lives” in the riot. The number would appear to include Sicknick, two officers who died by suicide in the following days, a protester shot by police, two protesters who suffered fatal heart attacks, and another who died of a suspected drug overdose. —WashintonExaminer

There are still plenty of questions outstanding over the events of that day, but more and more of them relate to the actions, inactions, or subsequent uses of authority AFTER the event more than the actions of the crowd itself.

Will we ever get answers to these questions? That will depend entirely on how doggedly concerned citizens will chase them down, won’t it?