Lies The Left is Telling About Child Separation And Policy 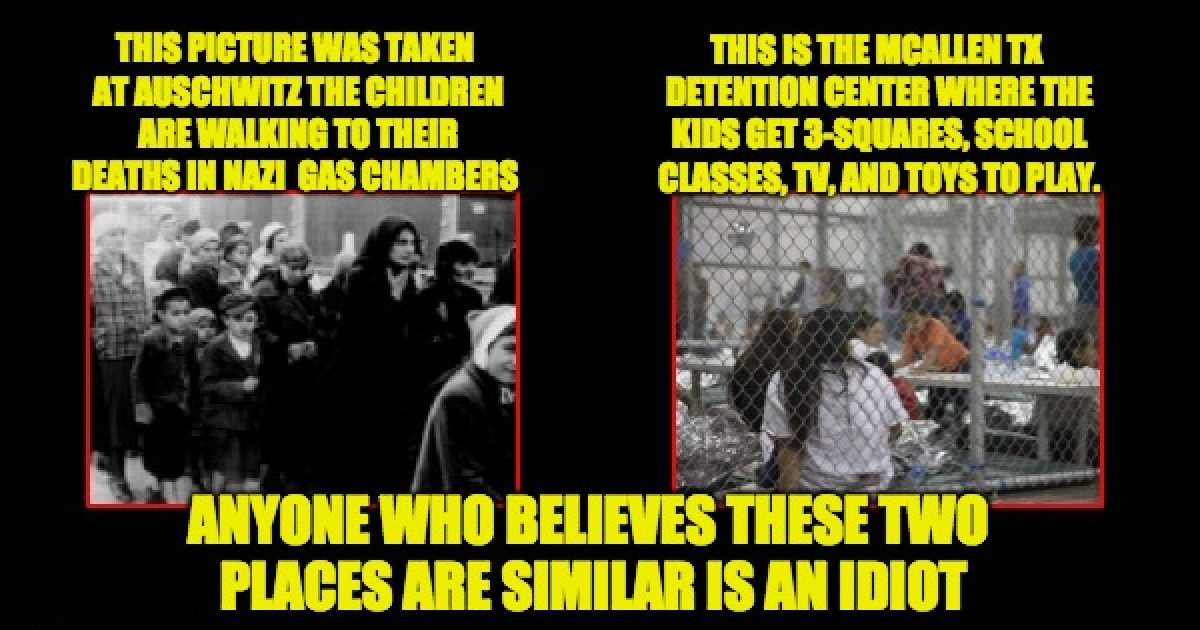 Remembering that everything leftists say is either a mischaracterization, a false equivalence, or an outright lie, the left and their media lapdogs have spun into overtime to attack the president for the policy of enforcing immigration laws which thanks to some pre-Trump legislation sometimes leads to child separation from the parents with whom they illegally crossed the border.

First of all, child separation is not the policy–the policy is enforcing existing laws. As explained by DHS Secretary Nielsen the seperation is caused by a trio of loopholes:

First, we need to amend the 2008 Trafficking Victims Prevention Reauthorization Act, or TVPR — which is much easier to say.  This law encourages families to put children in the hands of smugglers to bring them alone on this dangerous trek northward.  And make no mistake, we’ve talked about this before — this trek is dangerous and deadly.

Third, we need to amend the Flores Settlement Agreement and recent expansions which currently allow for — which would allow for family detention during the removal process.  And we need Congress to fully fund our ability to hold families together through the immigration process.

Until these loopholes are closed by Congress, it is not possible, as a matter of law, to detain and remove whole family units who arrive illegally in the United States.

And if Congress does not want the executive branch to enforce the law, then they have the change the laws. Thats what the President and the Department of Homeland Security get paid for.

Also remembering that all liberals want the U.S. torn down and want every single illegal alien headed our way to be welcomed with no conditions, liberals have called Trump’s policy everything from inhumane, to un-American, obscenely called the holding centers “concentration camps,” and even claimed Trump is “just like Hitler” with the policy.

Furthermore, the left is trying to mischaracterize the policy to fool Americans into thinking literally millions of children have been swept up and placed in “concentration camps.” Several thousand have been detained, yes, but the left makes it seems as if the situation is far more widespread than it is.

The point, here, is that if these illegals weren’t coming here illegally, they would not have been separated in the first place. Also, it is a fact that many of these small children and youngsters are not even being brought here by their real parents. Many of these kids are being brought by distant relatives like uncles, aunts, and cousins, NOT parents. Also, some of these kids are being bought like little slaves by the illegals bringing them here, bought to act as a cover to get them into the U.S under the assumption that they will be allowed in if they have children.

The media is throwing around a lot of lies and mischaracterizations to enrage people against Trump over this policy. As an example, one of the lies the media is selling is that the detention centers have murals of Trump’s face used as an intimidation tactic to scare the kids.

Starting to get some handout photos from our tour with @HHSGov.

Here’s the Trump mural I mentioned to @chrislhayes inside the shelter for incarcerated child migrants.

Also their beds and the towels they shower with. pic.twitter.com/EPEQ1VGAAF

Soboroff isn’t the only one selling this claim that the Trump administration has foisted a Trump wall decoration on these poor, poor kids. But the facts are a different animal. Because what the sold-out, left-wing media isn’t mentioning is that there are many murals of many different U.S. presidents — including Obama — and not just wall paintings of Trump.

Here are some of the other presidents at the Brownsville center, which media forgot to mention. Obama, JFK, Lincoln… pic.twitter.com/RIy5QJdTHT

Lies like this are floating all throughout the leftist propaganda masquerading as “news.”

Another thing that the leftist “news” media is not mentioning is that the U.S. government has been separating kids from parents for decades. None of this is new and it went on during Clinton and Obama’s administrations as well.

Indeed, we can’t forget the fact that the once the massive welfare state was invented by the Democrat Party in the mid 1960s, the government started taking kids away from parents immediately, not just by the hundreds but by the millions.

The welfare state was specifically set up to eliminate fathers from homes and leave them with single mother-headed households. And then, if those mothers failed to raise kids safely and securely, social welfare departments entered homes and physically took kids from their mothers, as well.

This, of course, is still happening today in every single state and it was a scheme invented by the Democrat Party.

As far as removing migrant kids goes, there is no more famous case than that of Elián González, a Cuban migrant who was in the U.S. legally, but who was nonetheless ripped out of the arms of his American relatives by President Bill Clinton and actually given like a gift goose to brutal communist dictator Fidel Castro.

González’ mother brought him to the U.S. when he was only six. The woman died in a boat on the open seas on the way to this country, but some of his relatives had already come to the U.S. and he was placed with them. Eventually, Castro found out about the boy and then forced the child’s absentee father, still living in Cuba, to petition the U.S. for custody. Clinton agreed and sent armed men into the González home to rip the boy bodily from his relatives’ arms.

The attack by armed American paramilitary operatives resulted in one of the most embarrassing photos of the era:

Worse, by handing over the boy, Clinton handed Cuba’s communist dictator a propaganda tool that he was able to exploit for 20 more years.

However, you may still feel that this policy is wrong. Granted these illegals could stop coming here expecting that little children will give them a free pass at illegally entering the U.S., but you may feel uneasy about this policy.

Well, don’t. Even the anti-Trump National Review noted that this is a reasonable policy.

Firstly, there has been no change to the policy that even Obama had in place. The administration is merely taking kids from adults who the U.S. government feels is falsely claiming the children to be their own. This policy was also in effect during the Obama regime.

The change is that where Obama just relented and let many of these liars through, anyway, the Trump policy is to prosecute every case it sees.

It IS the law, after all.

Also, in most cases these kids are held for only a short time:

The past practice had been to give a free pass to an adult who is part of a family unit. The new Trump policy is to prosecute all adults. The idea is to send a signal that we are serious about our laws and to create a deterrent against re-entry. (Illegal entry is a misdemeanor, illegal re-entry a felony.)

When a migrant is prosecuted for illegal entry, he or she is taken into custody by the U.S. Marshals. In no circumstance anywhere in the U.S. do the marshals care for the children of people they take into custody. The child is taken into the custody of HHS, who cares for them at temporary shelters.

The criminal proceedings are exceptionally short, assuming there is no aggravating factor such as a prior illegal entity or another crime. The migrants generally plead guilty, and they are then sentenced to time served, typically all in the same day, although practices vary along the border. After this, they are returned to the custody of ICE.

If the adult then wants to go home, in keeping with the expedited order of removal that is issued as a matter of course, it’s relatively simple. The adult should be reunited quickly with his or her child, and the family returned home as a unit. In this scenario, there’s only a very brief separation.

Next, the law is actually written so that the U.S. government may hold such children for up to 20 days. Again, it is a law that has been around since 1997, not Trump’s sudden new policy.

Finally, we must remember this above all: these illegals are the ones putting kids in danger, not the U.S. government.

The trip these illegals make is fraught with danger. Lack of food, water, and shelter, predation from human traffickers and criminals, threats of rape and murder, not to mention the weather conditions and rough topography they have to cross to get from the Central Americas, through hostile, drug gang-infested Mexico, and to the U.S.A.

These illegals — many who aren’t even these kids’ real parents — THEY are the ones putting these kids in danger. Not Trump.