Team Of Lawyers Suing WHO And Related Orgs. For Misleading World About COVID 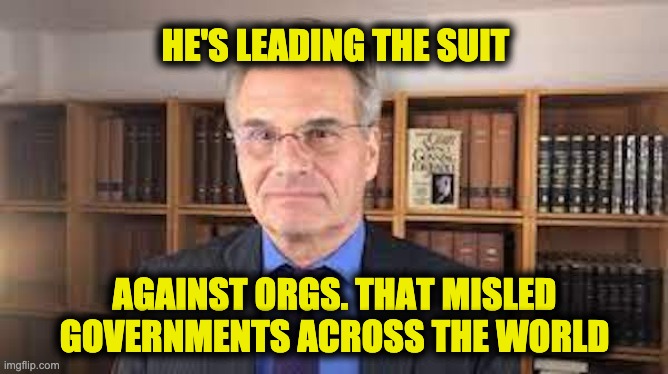 The WHO made pronouncements that protected China and blocked the world from the truth, leading to catastrophic consequences. Now they are being called on to pay the piper. A group of lawyers has gotten together and is taking a run at the World Health Organization’s leadership for the various ways they helped screw the world over.   Along with WHO Director Tedros Adhanom, included as defendants in the suit are Dr. Christan Drosten, the head of virology at Berlin’s Charité Hospital, and Dr. Lothar Wieler, the head of the RKI, the German counterpart of the U.S. Center for Disease Control. lawyers suing WHO

The attorneys putting together the suit are even accusing the defendants of ‘crimes against humanity.’

A group of lawyers is preparing to sue the World Health Organization and some of its partners for allegedly misleading the world over the severity of the COVID-19 outbreak and the measures taken to control it, which they say have damaged livelihoods and caused tremendous harm to economies.

The move was announced by Dr. Reiner Fuellmich, one of four members of the German Coronavirus Investigative Committee that has been hearing international scientists’ and experts’ testimonies since July 10, 2020.

In a video released to his YouTube channel [embedded below], Fuellmich accuses WHO Director Tedros Adhanom, Dr Christan Drosten, the head of virology at Berlin’s Charité Hospital, and Dr Lothar Wieler, the head of the RKI, the German counterpart of the U.S. Center for Disease Control, whom he claims knowingly misled governments across the world.

“This corona crisis, according to all we know today, must be renamed a corona scandal, and those responsible for it must be criminally prosecuted, and sued for civil damages,” he said. “On a political level, everything must be done to make sure that no one will ever again, be in a position of such power as to be able to defraud humanity, or to attempt to manipulate us with their corrupt agendas.”

Their class-action suit is being filed in the US, based on three issues:

1) The nature of the pandemic. Is it a pandemic in the authentic sense of infection rates? Or because of the prevalence of testing? Or is there a tie-in to corporate greed?

2) Are the restrictions offered because they genuinely make us safer? Or because they ramp up fear and make otherwise unpalatable options not only more palatable but demanded by the public — like all kinds of medical tests and treatments.

3) Was Germany specifically lobbied by ‘experts’ so that they would be a national role model whose example was trusted and followed by the rest of the world?

These lawyers are trying to make the case that claims about the tests were deliberately misrepresented, which means that the actions taken as a result of those tests were also illegitimate. Any harm that was inflicted as a result — to individuals or to whole economies — can be acted on for damages.

What will come of it? Too early to say.

But can you imagine what it might mean if a price is paid when deceptive practices cause harm — even when done by governments or corporations? We might see people thinking twice before destroying the lives of ‘little’ people.

“Under tort laws, all those harmed by these PCR test-induced lockdowns are entitled to full compensation for their losses,” he added. “In particular, there is a duty to compensate – that is a duty to pay damages – to companies and self-employed persons as a result of the lockdown and other measures.

“In the meantime however, the anti-corona measures have caused and continue to cause such devastating damage to the world’s population’s health and its economy, that the crimes committed by Messrs. Drosten, Wieler, and the WHO, must be legally qualified as crimes against humanity, as defined in Section 7 of the International Criminal Code,” Fuellmich said.

Watch the video interview of German consumer protection trial lawyer Reiner Fuellmich in the video below: