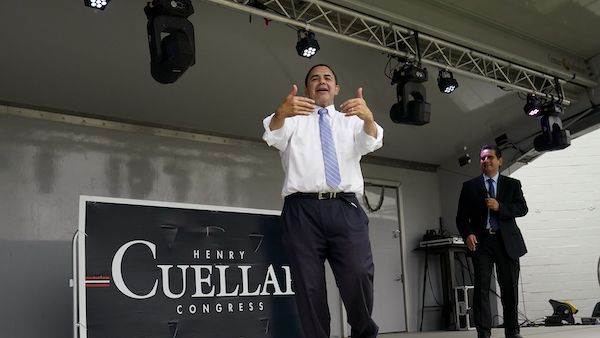 Amid hyperventilating rage over a leaked Supreme Court draft, the last pro-life Democrat in Congress survived another attack from the hard left.

U.S. Rep. Henry Cuellar should now be elected to a 10th term this fall, despite radical activists desperate to oust the popular Texas congressman in a primary because he holds one view they dislike.

He won the Texas 28th District run-off — a “proxy battle for the broader direction” of the Democrat Party, per the New York Times — over Jessica Cisneros of the lunatic left. The results were razor-thin.

The votes are in, the margin will hold. We have won by 177 votes.

Cuellar, according to the Huffington Post, “has a long history of voting against pro-choice legislation, and now stands as the last anti-abortion rights Democrat in the House. He regularly supported former President Donald Trump’s attacks on the Title X family planning program.”

Earlier this month, Cisneros deemed Cuellar “the last anti-choice Democrat in the House” and urged the entire party to stop supporting the incumbent over his pro-life stance.

Going full totalitarian three weeks ago, the 29-year-old fumed, “As the Supreme Court prepares to overturn Roe v. Wade, I am calling on Democratic Party leadership to withdraw their support of Henry Cuellar, who is the last anti-choice Democrat in the House.”

But even Nancy Pelosi and party leadership backed Cuellar.

In 2021, Cuellar was the sole House Democrat to vote against the so-called “Women’s Health Protection Act,” which Democrats obfuscate by saying it simply protects the right to abortion. In reality, the measure was so extreme it could not even pass the Senate because it prevented state governments from placing any limitations or restrictions on abortion. The bill also prohibits any legislature from enacting eleven specific categories of abortion regulation, as well as any “similar” to them.

Cuellar supports the Hyde Amendment, which once was bipartisan before Democrats decided every American, regardless of their views, should fund extinguishing nascent life.

Cuellar won again in part because he matched his constituents well. An 80% Hispanic swing district along the border, likely full of anti-abortion voters, he is bipartisan and usually wins the general election in a landslide. He’s the last Democrat to win statewide office in Texas, too, when he briefly served as Secretary of State in 2001.

Cuellar is also one of the few Democrats who care about border security. Additionally, he’s endorsed by the NRA and AIPAC.

Voters again rejected Cisneros, a polarizing millennial raised hundreds of miles outside the district who spent most of her life in progressive bastions like Austin and Brooklyn. She was endorsed by extremist groups like Justice Democrats, NARAL, and hard left politicians like Ed Markey, Alexandria Ocasio-Cortez, Bernie Sanders, and Elizabeth Warren.

Cuellar defeated Cisneros in 2020 and March 2022, but because Democrats stacked up candidates, he didn’t receive the required 50% of the vote two months ago.

He’s now defeated the unhinged progressive — who interned for him in 2014 — for the third time in two years.

The last anti-abortion Democrat in the House survives again.