Kwanzaa: A Fraud Holiday, With A Racist Goal, Created By A Criminal Madman 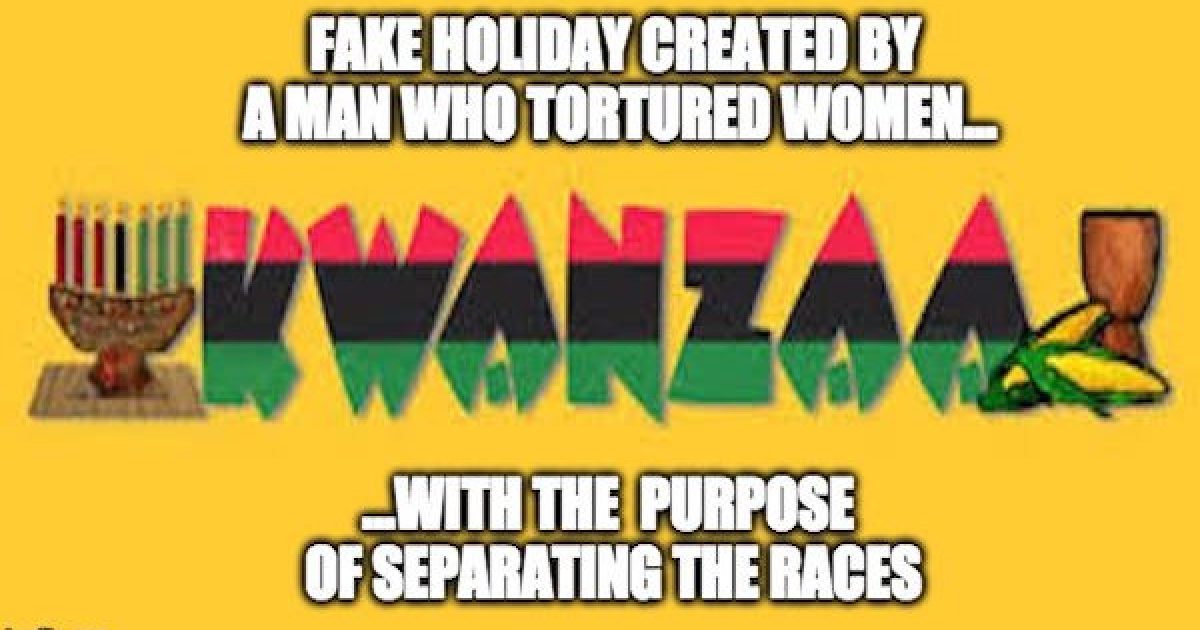 Those who are around my age woke up one December and discovered that the “holiday season” of Christmas and New Year’s became a trio, with the addition of something called Kwanzaa.  Oh, sure there were rumblings of a new holiday. But strangely in this country where political correctness is on overload, a day invented in 1966 by a rapist who ran a Black separatist group is considered by some as a holiday on par with Christmas, or New Year’s. Kwanzaa is exclusively an American holiday and is not celebrated in any other part of the world (including Africa). The name Kwanzaa comes from a phrase of Swahili origin, “Matunda Ya Kwanza”, and translates as “First Fruits of the Harvest.” That’s right it’s supposed to be spelled with only one “a,” the very name of this supposed holiday is a typo.

The man who created the holiday, Maulana Karenga was convicted in 1971  of torturing two women who were members of US (United Slaves), a black nationalist cult he had founded. A May 14, 1971, article in the Los Angeles Times related the testimony of one of the women:

Now I am not a doctor, nor have I ever played one on television, but this Karenga guy sounds like a paranoid psycho.

Somehow I cannot see rational people wanting to observe a holiday created by such a sick violent man (but then again, Al Sharpton led two anti-Semitic pogroms and he is considered a civil rights leader). Especially this year when sexual assault of women has been in the headlines almost consistently for months, why would anybody want to celebrate a holiday invented by a man who tortured women?

Arguably, this holiday raised by some to the level of Christmas has the totally opposite purpose. While Christmas is meant to unify, Kwanzaa is meant to divide. Or as the then 16-year-old Rev. Al Sharpton explained the feast would perform the valuable service of “de-whitizing” Christmas.

Heck even the scam’s creator, Maulana Karenga admitted it was a fraud.  In 1978 he told the Washington Post’s Hollie West:

So what is Kwanzaa? It’s the ultimate fraud.  It is a holiday created by a man responsible for violently torturing two women–and it has a fascist goal of separating the races. If  Black people in America would like to come up with a holiday that celebrates their valuable contribution to America I would not object. Nor would I object to a celebration of the rich Western Africa culture that many of them lost when they were dragged from their homeland to become slaves.

It is hard to understand why anybody would want to follow a violent felon, in a made-up holiday that mistakes racism and segregation-ism for spirituality, and fiction for history. And especially in the days of “me too,” I don’t understand why black women would encourage the celebration of this holiday when one considers its inventor. But then again, t then I never understood why white women continued to stand behind and promote Ted Kennedy and/or Bubba Clinton.