What Every Gentile And Secular Jew Needs To Know About Purim 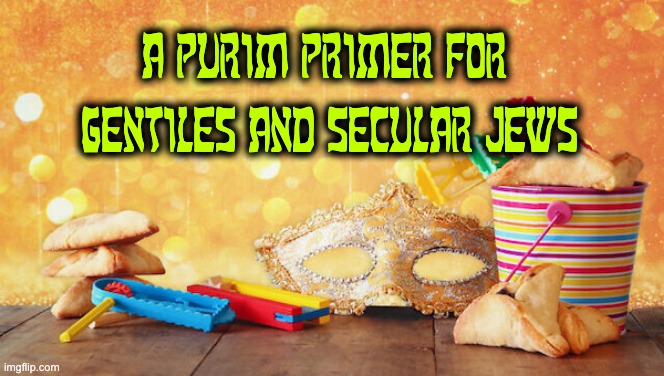 On Wednesday evening, March 16, Jews worldwide will begin to celebrate the holiday of Purim. It commemorates a victory of the Jews over an evil man named Haman who wanted to wipe them out. Purim is a different kind of holiday for many reasons. The biggest difference is that Purim is a holiday for political junkies…it’s full of political intrigue and people representing themselves as something they’re not— just like politics.

On Purim, we read the Megillat Esther, “The Scroll of Esther,” the firsthand account of the events in Persia long ago. It was written by the heroes themselves: Esther (whose real name was Hadassah) and her Uncle Mordecai, who raised her as if she was his daughter.

Megillat Esther is where the expression ‘The whole Megillah” comes from. Sorry for you cartoon fans. While it sounds similar, Megillat Esther has nothing to with that old cartoon Magilla Gorilla.  In Yiddish, it’s the Gantseh Megillah.

The quick version of the story is Mordecai, the uncle and guardian of a beautiful young Jewess named Hadassah (nothing creepy happened between the two). Mordecai discovers a plot to kill the king, and he informs the royal guards the plot is foiled, and the King is grateful.

Soon after he saved the king, Mordecai refuses to bow down to the royal vizier Haman (Jewish men only bow to God. Well God and their mothers and wives). Haman is outraged at the affront of not getting a bow and asks his boss (the King) for permission to use Persian forces to kill all the Jews in the Persian Empire because they are disloyal (kind of like Rep. Omar’s comment about Israel supporters having a dual loyalty). The king grants Haman his wish.

Haman picks the attack for the Jewish month of Adar, figuring that it must be bad luck for the Jews because that’s the month Moses died. But like most people of the evil persuasion (and in the mainstream media), Haman was too lazy to do his research. If he had done the research, he would have realized that Moses died in that month. But he was also born in that same month. Therefore Adar is considered a great month.

Haman chose the exact date by drawing lots.  That is how the holiday got its name (the Hebrew word for lots is Purim). The day he picked was Adar 14. No one told Haman to avoid the Ides of Adar.

To fill the empty queen job, The King holds an empire-wide beauty pageant.  Mordecai’s niece Hadassah wins the pageant and becomes the new queen. She changes her name from Hadassa to Esther’s Persian name to hide her Jewishness.

Skipping to the end, Mordecai tells Esther of Haman’s plot to kill all the Jews and urges the new queen to ask the king to remove his permission. The problem is that going to see the king without permission can bring on a death sentence (some things in Iran never change). For support, Esther asks all the Persian Jews to join her in three days of fasting and prayer before she attempts to see the King.

Three days later, Esther enters the throne-room looking her “hottest.” The king approves her visit. Her “ask” for the king was that he accepts an invitation to join her for a banquet (and bring Haman). At the banquet, she asks them to join her for another feast the next night (the way to a man’s heart….).

On night two, she reveals that she is Jewish, and Haman plans to exterminate her people, including her. This angers the king who orders Haman hanged along with his ten sons on the very gallows the grand vizier built to hang Esther’s, Uncle Mordecai.

Even though the king sent Haman and his sons to swim with the gefilte fishes, the story doesn’t end there.

According to Persian law, the previous decree against the Jews could not be annulled, so the King allowed Mordecai and Esther to write another executive order. So they write one that allows the Jews to defend themselves against the attacks. They protect themselves splendidly, the Jews are saved, Mordecai becomes the King’s new vizier!

Purim is a great holiday for kids. The kids don’t get plastered, only the adults. But the part of Purim the kinder (children)  enjoy is another traditional way of celebrating the holiday —wearing costumes and masks (not the COVID-type masks). The kids enjoy wearing their costumes and seeing their parents looking very goofy in their costumes. They also get to annoy their parents (more than usual). During the reading of the Megillah, every time Haman is mentioned, we use noisemakers to drown out his name. Sadly, for parents, the kids usually take those noisemakers home. So make sure to ask your doctor if you can take migraine medicine while sloshed because of Purim.

The reason for the costumes is that, like politicians, all the major characters in the story hide who they really are. In the Purim story

Perhaps the most significant case hidden identity in the Purim story is God. Jews recognize that it was God who helped them emerge safely in this battle against Haman’s plan of extermination. But the Big Guy Upstairs isn’t mentioned in the Megillah. Jews know God was behind our victory despite the fact he wasn’t mentioned.

That’s not an unusual occurrence. Look at many recent miracles where the only way we know that God was involved is that it wouldn’t have had the same result without some heavenly help. Just look at the creation of a Jewish State after almost 1,900 years, or how nascent Israel defeated the militaries of the Arab League nations, which were bigger and more powerful than the army of the nascent Jewish state. Look at the biggest miracles since Moses led the Jews out of Egypt—the 1969 NY Mets winning the World Series. Or look at the fact that it’s year 4719 in the Chinese calendar and 5782 in the Jewish one. That’s a miracle because the Jewish people existed for over a thousand years without eating Chinese food.

Today just like in the Purim story, politicians hide their real faces.

Another interesting parallel to today is that the king couldn’t save the Jews. He could only grant permission for the Jews to protect themselves. Unlike the King in the Purim Story, America’s former President Obama claimed he was a protector of Jews and the Jewish state. But he withheld his consent for Israel to attack Iran’s nuke infrastructure. Iran is still trying to build nuclear weapons to destroy Israel.   Obama criticized the Jewish state when she fought back against terrorists. But if push comes to shove, Israel will defend herself with or without permission because, like in the Purim story, God may not done overt miracles. But he has had the back of the Jewish people ever since he told Abraham to leave his father’s house and move to Israel almost 4,000 years ago.

Even in the U.S., politicians are wearing “masks.”

Just like today’s politics, the Purim holiday is full of political intrigue and people representing themselves as something they’re not.  The holiday’s lessons include not blindly trusting politicians of any party without researching to see if their words are just masks. And the most important lesson—whether you see him or not, God is always there.