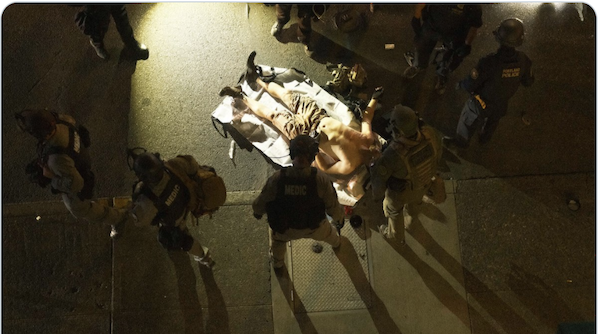 Note: Update at the bottom of the post. killed Trump supporter

On Saturday night, a Trump-supporting man was shot and killed in Portland, Oregon, after a caravan of Trump supporters clashed with BLM/Antifa protesters (they have been identified as associated with either/both groups).

It wasn’t clear if the shooting was linked to fights that broke out as a caravan of about 600 vehicles was confronted by protesters in the city’s downtown.

An Associated Press freelance photographer heard three gunshots and then observed police medics working on the body of the victim, who appeared to be a white man. The freelancer said the man was wearing a hat bearing the insignia of Patriot Prayer, a right-wing group whose members have frequently clashed with protesters in Portland in the past.

It sounds like someone is shouting, “We got a Trumper right here” just before the shots are fired and the man is killed. pic.twitter.com/MMCnp5iwtj

BREAKING: A person was shot in the chest in downtown Portland. Unknown if related to antifa/BLM vs Trump caravan clashes. Unconfirmed if person is dead. pic.twitter.com/hS7im5Umlt

Clearest and closest or enhanced video of the #Portland shooting.. ?? pic.twitter.com/eKs1qp38cm

When word got out that the victim was a Trump supporter, the BLM/Antifa terrorists celebrated.

After finding out that it was a “blue lives matter” supporter who was killed, antifa in Portland are very happy. They’re dancing and chanting now. #PortlandRiots pic.twitter.com/PeqyVUXfNE

“He was a f—ing Nazi! Our community held its own.”

Antifa & BLM in Portland celebrate the homicide of a purported Trump supporter who was affiliated with Patriot Prayer, a Portland-area conservative group. pic.twitter.com/xjIWk0KHN2

Andy Ngô also reported, “I am not sad that a f—ing fascist died tonight,” says a woman at the Antifa gathering in downtown Portland. The crowd laughs and cheers. The ID of the deceased is not confirmed, but he is believed to be a Trump & blue lives supporter.

Just heard that the man killed is affiliated with my group. Just had drinks with him last Saturday.

This is disgusting. This is why we say that #LiberalismIsAMentalDisorder! He was literally just riding his skateboard! You CANNOT defend this!
GRAPHIC WARNING! AntiFa And Black Lives Matter Cheer The Murder Of A Patriot In Downtown Portland https://t.co/KdKqzlGsx2

One death wasn’t enough for the violent protesters. Per the District Herald Newspaper, “Following the fatal shooting, rioters also surrounded and assaulted Patriot Prayer founder Joey Gibson. When Gibson retreated into a gas station, rioters broke the windows and threatened the owner.”

Video of the antifa mob smashing up a petrol station in downtown Portland and trying to break inside. They said conservative activist Joey Gibson was inside. #PortlandRiots pic.twitter.com/ObrVAJqBG3

They won’t call the violent marxist thugs of Antifa/BLM, who’ve been rioting in Portland for 3 months, the far left but this is how they report a murder. #shortskirtdefence https://t.co/iFEOhyPLAp

Rita, it’s the NY Times. To them, anyone to the right of Josef Stalin is far-right.

President Trump offered to send the National Guard to Portland and calm down the riots. In fact, he’s offered many times. But Portland Mayor Wheeler and Oregon Governor Kate Brown have rejected every presidential attempt to help.   The death of this still unnamed Trump supporter is on their heads.

The video below shows the aftermath of the shooting. A man rushes to the victim and asks, “Are you okay?” A female protester who was also a medic came over to help. “Get the f–k out of here!” the first man screams. to help. Another protester who came over with the medic says,  “She’s a f–king medic! She’s trying to help him, so let her help!” The victim’s friend changes his mind and lets her help.  Soon the Cops show up clear and the area, while one helps with the first aid. Other cops start asking witnesses what happened: