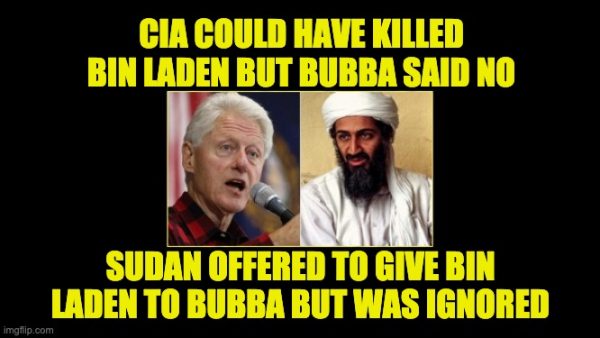 A clip from the Showtime documentary “The Longest War” reveals the CIA had an opportunity to kill Osama Bin Laden in the 1990s but were prevented from doing so by an order from President Bill Clinton. Not in the documentary but also true was that Bubba’s administration also had an opportunity to have Bin Laden handed over to the US, but that offer was stunted by Susan Rice.

Newly out of office, Clinton famously confessed hours before the 9/11 attacks to having an opportunity to take out Bin Laden, but because hundreds of innocent lives would have been lost along with his, he opted not to greenlight the mission.

“I nearly got him,” Clinton told an audience in Australia 10 hours before the 9/11 attacks.

“And I could have killed him, but I would have to destroy a little town called Kandahar in Afghanistan and kill 300 innocent women and children, and then I would have been no better than him. And so I didn’t do it,” he lamented.

But There Was Another Missed Opportunity

According to the documentary, CIA agents said they had another opportunity to take out Bin Laden with very little collateral damage.

Afghan tribal networks revealed that Bin Laden would be traveling a particular route and suggested U.S. military forces bury explosives ahead of his journey.

“We said absolutely not,” former CIA station chief Bob Grenier explained. “We were risking jail if we didn’t tell them that.”

“The CIA had a so-called ‘lethal finding’ [bill] that had been signed by President Clinton that said that we could engage in ‘lethal activity’ against bin Laden, but the purpose of our attack against bin Laden couldn’t be to kill him,” Grenier detailed.

“We were being asked to remove this threat to the United States essentially with one hand tied behind our backs.”

Bubba may have had another opportunity to change history, not to kill Bin Laden, but to take him. According to Richard Miniter who wrote the book “Losing bin Laden,” Rice played a key role in scuttling the deal that could have prevented the 9/11 attacks on New York and Washington. Miniter claimed Sudan was anxious to turn bin Laden over to the U.S., Rice – then a member of Clinton’s National Security Council – questioned Khartoum’s credibility

“Rice [cited] the suffering of Christians [in Sudan] as one reason that she doubted the integrity of the Sudanese offers,” said Miniter. “But her analysis largely overlooked the view of U.S. Ambassador to Sudan Tim Carney, who argued for calling Khartoum’s bluff.”

Miniter said that Carney argued the Clinton White House should accept their offer of bin Laden and see if the National Islamic Front actually hands him over.

They were all missed opportunities, calling Sudan’s bluff and accepting their offer to turn Bin Laden over seems to be the worst. And as a reward for her bad judgment, Susan Rice became Barack Obama’s National Security Advisor, a position allowing her to lie to the American public over and over.

Perhaps the most damning detail of all in the documentary is the absolute disregard the Clinton administration had for Bin Laden as a threat.

Greg Barker, director of the documentary notes that every major national security entity – from the President to the Department of Defense – failed to take the 9/11 mastermind seriously.

If anybody were to suggest Bin Laden was a problem they “were often ignored and even ridiculed.”

Trump on retired Navy SEAL Adm. Bill McRaven, who has called the president's attacks on the press "the greatest threat to democracy."

"He's a Hillary Clinton backer and an Obama backer. And frankly, wouldn't it have been nice if we got Osama bin Laden a lot sooner than that?" pic.twitter.com/tXsZHjJzaA

The documentary proceeds to analyze what might have been if Clinton had taken Bin Laden seriously and did not block the CIA from taking him out.

“The threat was real,” according to Marty Martin, a CIA counterterrorism officer at the time.

What a devastating thought to have to ponder.