FAILING A GENERATION: Kids Not Learning Online Or In-Person, Millions Falling Through Cracks!

Meanwhile, Haven’t Missed A Single Paycheck. And Their Unions Are Bickering About ‘Acceptable’ Terms Of Returning To Work. 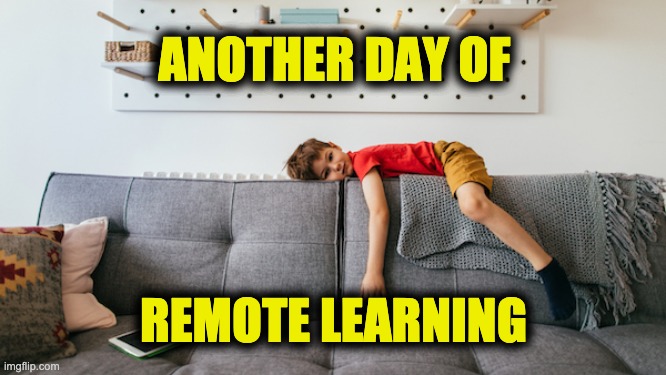 So much for their usual line about everything they do being ‘for the children. kids not learning

Three million children are falling through the cracks and losing ground instead of moving ahead with their education.  However, Florida, among others, proved that schools could be safely reopened. Maybe it’s time for a class-action lawsuit against some of those teachers’ unions who have held hostage. Not just the students but also any working-class family that couldn’t return to work because they had to care for their homebound children.

Real damages HAVE been suffered, and it’s pretty clear by now that they are drawing this out longer than ANY medical evidence gives them any excuse to.

Besides the cost to the economy that parents of young families staying home with their kids during hours they would normally be in class, there is a much more heinous price being paid by the students themselves.

Not just any students, but (contrary to the line we’re being fed by some pro-lockdown teachers’ unions) the ones hurt most are exactly the ones we might have predicted — the ‘most educationally marginalized students in the country.’

Said differently, the hurting students (many of them poor and inner-city) who are teetering on the edge of being failed utterly by the school system are being given a good hard shove by these perpetual-lockdown teach-by-zoom-forever teachers’ unions.

A recent study by Bellwether Education Partners, a non-profit that focuses on underserved communities, estimates that approximately 3 million of the “most educationally marginalized students in the country” may have been missing from school since March 2020, when the pandemic forced school closures. The group said it arrived at the number by calculating a “likely percentage of at-risk groups not in school, based on media reports and available data.”

ABC News contacted officials from the departments of education in all 50 states, and found that the problem appears to be nationwide.

Although some states reported that they do not track such information, many others said that they have seen a significant decline in their enrollment numbers, and still others have reported they have thousands of missing students.

…“From a learning standpoint, that was potentially catastrophic,” Magee explained. “What we’ve learned, over the course of the last 12 months, is that from both a learning and a health perspective, there are millions of students for whom virtual learning just is not working.” In addition, he said, “there’s a subset of those students who are completely detached from their school systems at the moment.”

“They have logged off. They don’t feel connected enough to their own learning to log on every day,” he added.

According to the NEA’s report, most of the children lacking appropriate technology are from low-income and minority families, with “this inequality is systematically related to the historical divisions of race, socioeconomic status, and geography.”

Wouldn’t it be a damned shame if some of the money these Teachers’ Unions have to shovel into local elections were tied up with a national class-action lawsuit by the students and families who have been harmed by their outright refusal to return to work?

Maybe some of those funds could be redirected into making parallel learning systems available for these suffering students — like Charter Schools or micro-schools and private tutoring — to help them recover some of the opportunities that public school politics have robbed them of while other students with different options found other ways to keep up.

Micro schools for lagging students is exactly the kind of project we could use a new generation of bold visionaries to lead us in.