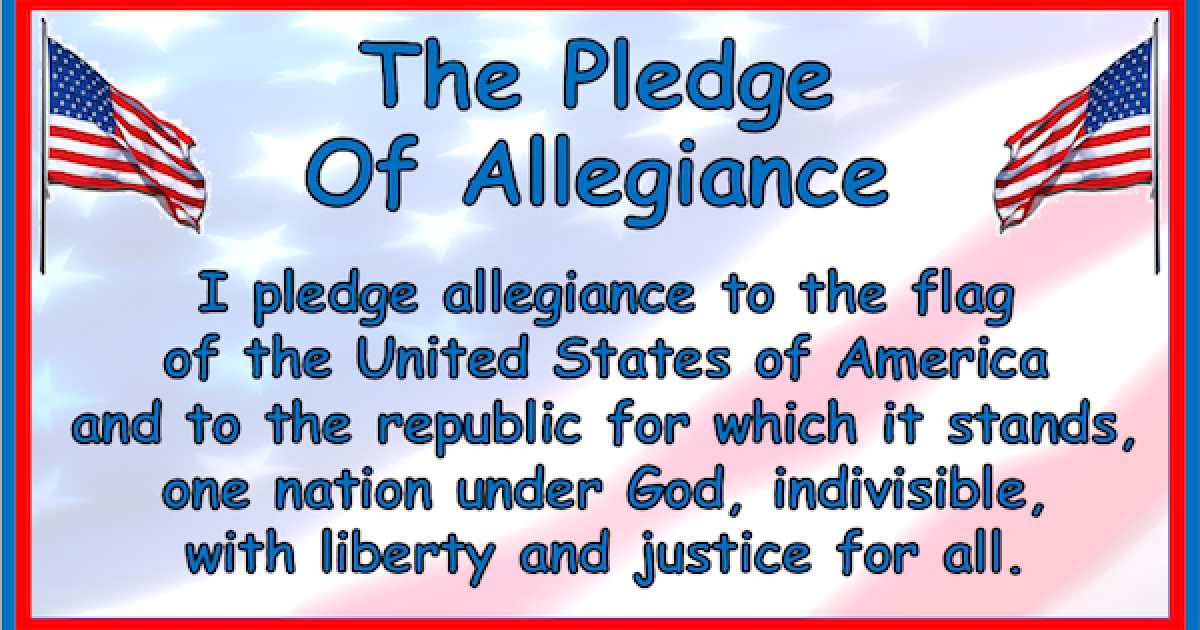 The media is now complaining that when children of illegals end up in U.S. custody, the kiddos are being taught English, to say the Pledge of Allegiance, and are fed American food. Oh, the HORRORS!

Activists for illegals are attacking the U.S., now, because when parents from south of our border send their kids here unaccompanied, our government is feeding them American foods, putting them in temporary schools, and, *gasp*, teaching them English. Worse, U.S. authorities are forcing them to say the Pledge of Allegiance IN ENGLISH, yet.

Of course, these illegals — who should not be here in the first place, mind you — have a friend in the anti-American Washington Post. Just look at how the paper starts its story. Here is the very first paragraph of its June 24 story:

Their mothers are missing, their fathers far away. They get pizza, maybe cold cuts. They are exhausted; they cannot sleep. There are other children around, but they had never seen those kids before, and those kids are crying or screaming or rocking or spreading the feeling that everything is not okay.

First of all, let’s be honest about the conditions in which these kids are temporarily housed, shall we?

They have all come from dirt-poor nations where they lived in squalor. Back home they often lived in fear of their lives from the drug gangs or the government. On the way here they were often entrusted to human traffickers that beat them, starved them, frightened them, and even raped some of them. Many of them never went to a school in their lives. Before ending up in the custody of U.S. immigration officials, that has been the life of most of these young children.

Now they have a safe place to sleep. Food in their belly. The safe companionship of other children. Time to play. And the opportunity to learn something. They are living better in U.S. custody than they have for their entire, short little lives.

And yet, The Washington Post acts as if they are being mistreated — even terrorized — by the Departments of Homeland Security and Immigration. In short, the Post is lying to you, America.

Next, the paper gives us this line of garbage:

The children who were forcibly separated from their parents at the border by the United States government are all over the country now, in Michigan and Maryland, in foster homes in California and shelters in Virginia, in cold, institutional settings with adults who are not permitted to touch them or with foster parents who do not speak Spanish but who hug them when they cry.

The children who are “forcibly separated from their parents” are only separated for a few weeks while their parents are vetted by U.S. officials. The paper does not bother to inform its readers of this making it seem instead as if they are to be “separated” forever.

But, here is the real crux of the matter: if their parents had not tried to come across our border illegally in the first place, there would have been no separation.

There is another thing the Post is not bothering to tell its readers. The fact is, some of these “parents” are not the parents of the children they are illegally bringing across our border. Indeed, a portion of these kids have been purchased like commodities by these illegals for the sole purpose of fooling U.S. authorities into thinking that they are parents. That is one of the reasons the government is separating them from the adults they arrived with, in the first place, because the government is trying to determine if these kids are really with their parents or if they are being exploited and enslaved by these criminals.

The paper goes on the accuse the U.S. government of abuse:

And now they live and wait in unfamiliar places: big American suburban houses where no one speaks their language; a locked shelter on a dusty road where they spend little time outside; a converted Walmart where each morning they are required to stand and recite the Pledge of Allegiance, in English, to the country that holds them apart from their parents.

In another spot the article says:

Youth-care workers were told to discourage children from speaking their indigenous Central American languages, he said, before the policy was reversed.

(As an aside, it appears that the Post “don’t speak no United States” itself as in the next paragraph the paper writes that an employee of the shelter spoke anonymously “for fear of losing their job.” It’s for fear of losing “his” job, Washington Post, not “their.”)

Next, the paper describes what some of these children received when they arrived at a shelter in Maryland:

Each child got a drawstring “arrival bag” containing a change of clothes and other necessities. The little ones got a teddy bear, too. They got to leave the shelter promptly, going to a new home with foster parents who speak to the children in “love language,” Brown said.

Gosh, they were TERRORIZED with free clothes, soap, and necessities, and EVEN AND EVIL TEDDY BEAR! We should be ASHAMED of ourselves. OK, you know that was sarcasm, right? Too bad the Post is serious that these kids are being terrorized by free stuff.

What about being fed and their grooming habits? What happens with that? Well, for one they are eating better than they ever have. But that isn’t enough for the Post:

They get pizza, maybe cold cuts. … [T]he children continued their routines – karaoke on Monday, cake for those celebrating a birthday[.] …

In Bristow, Va., about 15 boys and girls between the ages of 10 and 17 arrived in recent weeks after being separated from their parents. Now they stay in some of the 10 modern, $600,000 single-family houses on the sprawling green campus of Youth for Tomorrow, a residential facility for at-risk children.

The paper’s long story also says this of the treatment the kids are receiving:

Lawyers show up at the centers, sometimes bringing toys or stress balls for the children to play with. Some lawyers try to teach the kids about their predicament[.]

A worker leaving the shelter in her truck is asked how the kids inside are faring.

“They’re eating better than you,” she said Friday. “For lunch, they had fish, carrots, broccoli, a dinner roll. They’re being treated very well.”

A colorful jungle gym and a volleyball net sit in the front yard, which is shaded by tall trees. Neighbors said the facility has an indoor pool. One neighbor recently saw several little girls dressed in pink tops and shorts playing on the swings in the front yard. There are small basketball courts and two red tricycles for little kids.

Heck, in some cases these kids are living better than the poorest American citizens!

Finally, we must again stress that all this is temporary until their status and their “parents” status is cleared up. After that, they are either reunited with their real parents — if those they came here with really were their parents — and set for deportation or allowed into the country. Or they are passed on to human rights groups if they are found to have been trafficked by criminals.

Sadly, once again we see the media’s underlying message is built on lies, and this Washington Post story is a perfect example of the shading of the story to fit a liberal agenda. The Post’s purpose with its lies is to force readers to adopt the paper’s no borders ideals to prevent the “abuse” of these children. But the fact is, there is no abuse of these kids except by the very people who brought them here in the beginning.