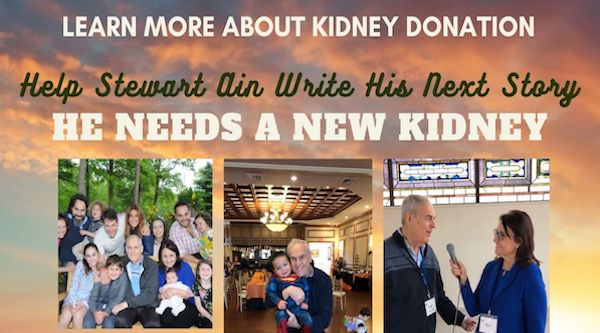 Folks my friend Stew Ain needs a new kidney. On September 13th there will be a webinar that will tell you all you need to know about living kidney donation. You may find out that you can help Stew or someone else. Stew’s bio is below and underneath is a graphic that gives all the information one to attend the seminar.  kidney donor

The bio below speaks to Stewart’s award-winning career as a Journalist and the charitable activities of Stew and his wife Meryl (an award-winning author).  What the bio leaves out is that Stewart is a caring friend who will give you the shirt off his back, a big supporter of Israel, (and an incredibly fast davener and Torah reader).

The sages teach us “Whoever saves a single life is considered by Scripture to have saved the whole world.” Please attend the seminar and learn about an opportunity to save the world.

Stew’s Bio
Stewart Ain is an award-winning journalist and three times Pulitzer Prize nominee whose blockbuster investigative report about Nazi gold stored at the Federal Reserve in Lower Manhattan triggered investigations, Congressional hearings, and a settlement with Swiss banks that resulted in $1.25 billion being paid to Holocaust survivors and Holocaust victims’ heirs.

He has reported for The New York Times and New York Daily News and was a staff writer for The New York Jewish Week for 34 years. Currently, he writes for The Forward, JTA, The Jewish Insider, and e-Jewish Philanthropy. His articles about Renewal have appeared in both The Jewish Week and in The Forward. For the past 40 years, he has hosted a half-hour weekly television program, Jewish Life, on Long Island’s Cablevision.

In addition, he is a board member and major contributor of the Lend A Hand Project (formerly L’Yad M’Yad ) on Long Island, who founded and chairs a committee that distributes money to those in need.

In 2014, along with his wife Meryl and his brother-in-law, Arthur Fischman, he wrote the book, The Living Memories Project: Legacies That Last. The couple’s generous support of JASA makes possible the annual Living Memories Project Conference, which provides continuing education to professionals in the field of bereavement counseling.

Stewart is a daily participant in synagogue services at the Dix Hills (L.I.) Jewish Center. In addition to generously supporting their home shul — both as donors and doers –, the Ains also belong to and contribute to Congregation Beth Sholom in San Francisco, where their son, Daniel, is the senior rabbi, as well as Congregation B’nai Torah in Boca Raton, Florida, preserving the legacy of Stewart’s late parents, David and Helen Ain.

For their ongoing support of the UJA-Federation of New York, Meryl and Stewart and their entire family were honored with the L’Dor V’Dor Award in 2017.

Stewart’s wife, Meryl, is a retired educator and the author of the award-winning Post-Holocaust Novel, The Takeaway Men, published in August 2020. They have three sons, three daughters-in-law, and six grandchildren.

Stewart’s identical twin brother, Howard, had a successful kidney transplant in 2018. His cousin, Monte Spellman, is currently on dialysis. 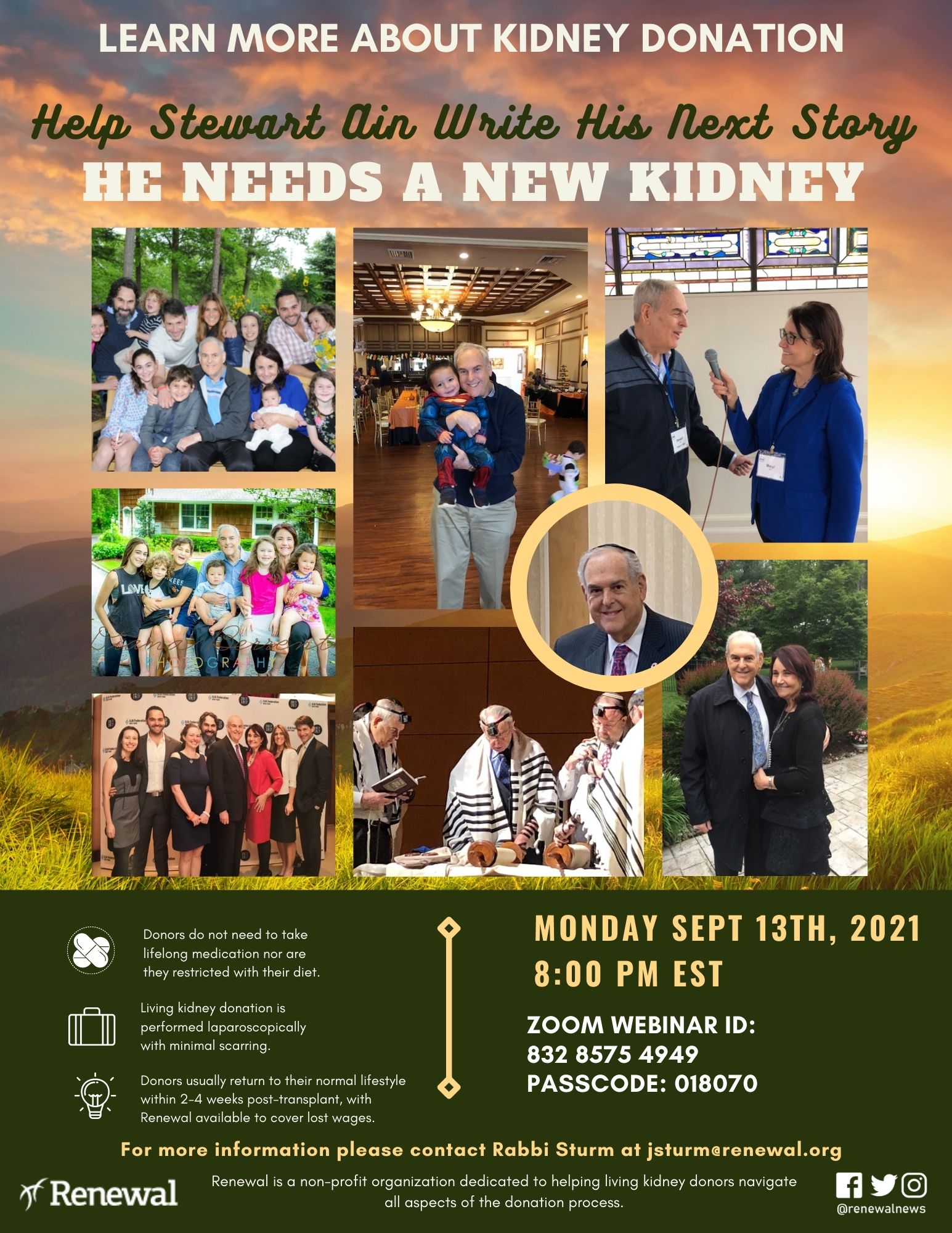