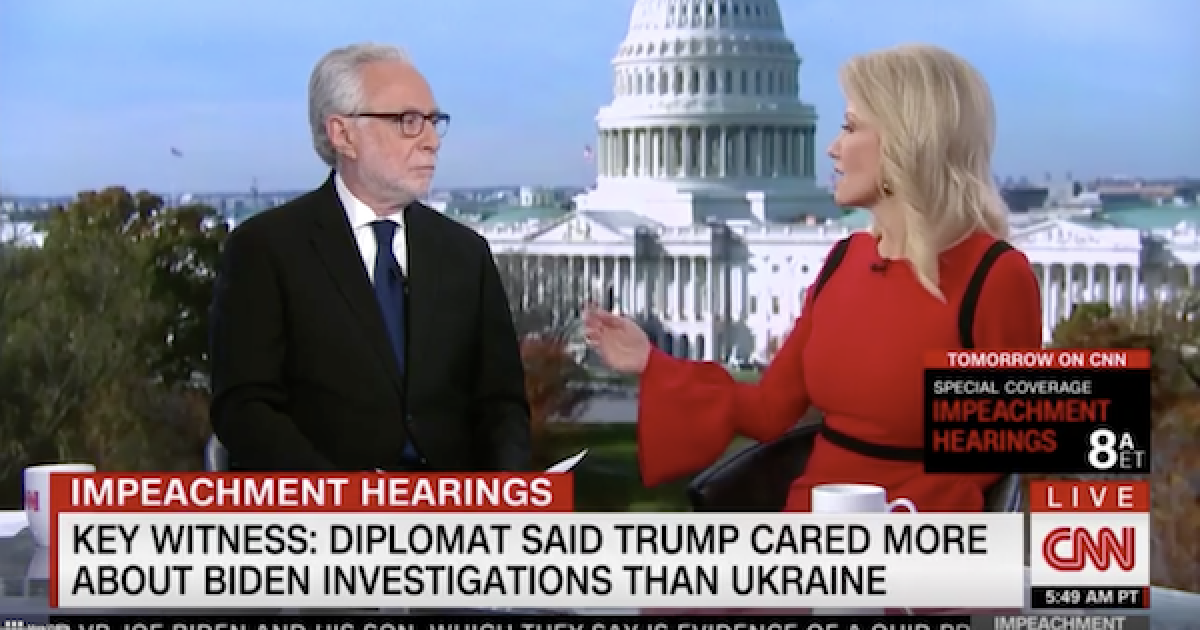 OUCH!  This had to hurt. Kellyanne Conway really let Wolf Blitzer have it.

The evisceration happened toward the end of an interview. Counselor to the president Kellyanne Conway and CNN’s Wolf Blitzer had a tough discussion about Wednesday’s impeachment hearings. But Blitzer’s “final question” crossed the line, He implied that Ms. Conway had problems in her marriage because her husband publicly trashes President Trump.

Blitzer: I just have a final question, a sensitive question, and it’s a political question, it’s a substantive question. I don’t want to talk about your marriage. I know that there are issues there. Your husband George Conway —

Gee I don’t want to talk about your marriage and then he talks about their marriage—and Kellyanne Conway destroyed him.

Conway:: Why would you say that?

Blitzer:: I don’t want to talk about your marriage. I want to talk about a substantive point that your husband George Conway made. He was on television all day yesterday during the first day of the impeachment hearings and said this about the President of the United States. I just want your reaction to the substance of what —

Conway: So before you play the clip, which I haven’t said. Why and why are you doing that?

Blitzer: Because he’s a legal scholar. He’s a lawyer and was really going after the president of the united states.

Conway: And the relevance is — and — come on. Wait for it. Drum roll. And he’s married to me?

Blitzer: He happens to be married to you.

Conway: But you should not have just said to your audience, “I don’t want to talk about your marriage,” quote, “I know there are issues.”

Blitzer: I don’t want to talk about your marriage.

Conway: Why would you say there are issues?

Blitzer played a clip from George Conway’s MSNBC Interview. George Conway says, “The problem with Donald Trump is he always sees himself first. Trump is all about Trump. And that’s why it was inevitable he’d get himself into this soup once again. And that’s what this is all about. He’s using the — he was using the power of the presidency. Its most unchecked area, foreign affairs, to advance his own personal interest as opposed to the country’s.”

In 2017 you asked Angus King, “Are we getting closer to impeachment?”

Does anybody ever feel badly about getting it so wrong? We sort of look the other way of how wrong everybody was here and elsewhere with the elections. I was on your network every single day as gracefully and respectfully as I could laying out the case as to why Donald Trump would beat Hillary Clinton. I have a living, breathing video catalog which is why I don’t worry about anything when people say, “I always knew he’d win. I said it all the time.” Really? Because you were sleeping when I was on tv in the morning and at night. We have a leaving breathing catalog. We’re going back to Pennsylvania. It’s the same stuff all the time.

What you just quoted is said every day by other voices, but you wanted to put it in my husband’s voice because you think somehow that that will help your ratings or that you’re really sticking it to Kellyanne Conway. And let me be very clear. You didn’t stick it to Kellyanne Conway. I don’t think you stuck it to Kellyanne Conway. I think you embarrassed yourself and I’m embarrassed for you because this is CNN now? I looked up to you when I was in college and law school, I would turn on CNN to see what Wolf Blitzer had to say about war, famine, disruption abroad. I really respected you for all those years as someone that would give you the news and now it’s what somebody’s husband said on a different network–

Yikes, And it worked because Wolf Blitzer looked a little sad when Kellyanne Conway said she looked up to him.

Wolf Blitzer brought up Democratic consultant James Carville and his Republican consultant wife Mary Matalin and how he would ask them about their political differences. Of course, Blitzer didn’t start his interview with Carville and Matalin by saying their marriage had “issues.”

Below is a video of the “marriage” section of their interview. Enjoy Conway beating up on Blitzer.