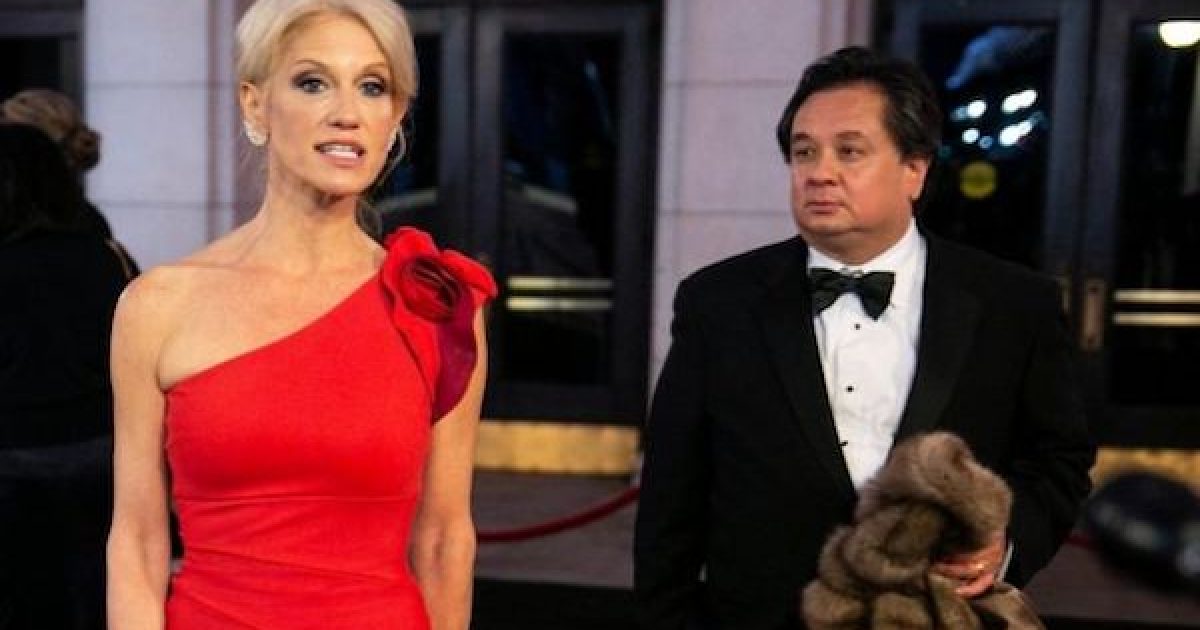 It’s a sad thing that Kellyanne Conway’s husband is so jealous of his wife’s success that he tries to make things in the office hard for her by constantly trashing her boss the president in a very public manner. His latest attempt to hurt the relationship between the Counselor to the President and her boss was an oped in the Washington Post, calling Trump a bigot. Ms. Conway dismissed her husband’s oped, saying that Democrat claims of racism have grown “tired.”

On Monday, the Washington Post ran an op-ed by George Conway, a man who tried to get a job in the Administration and since has grown into a virulent opponent of the President who made his wife more successful than him.

“No matter how much I came to dislike him, I didn’t want to think that the president of the United States is a racial bigot,” Conway wrote. “But Sunday left no doubt.”

What happened Sunday? President Trump made comments, relatively mundane comments at that suggested the Squad, “go back and help fix the totally broken and crime-infested places from which they came? Then come back and show us how it is done.

The sad-sack failure husband of Kellyanne Conway was so aghast at the statements, words which proud patriots have said time and again when watching anti-American protesters denounce their country that he had but one conclusion. Orange man bad.

In fact, Conway made the baseless claim that Trump’s words were on par with using the n-word.

“Naivete, resentment and outright racism, roiled in a toxic mix, have given us a racist president,” he wrote. “Trump could have used vile slurs, including the vilest of them all, and the intent and effect would have been no less clear.”

Mrs. Conway, in an appearance on “America’s Newsroom” Tuesday, swatted away her husband’s claim that Trump is racist, noting that she knows him far better than her spouse.

“I totally disagree,” she said.

“But I work with this president,” she added in an attempt to soften the blow for George. “I know him. I know his heart, I know his actions. I know how much he has helped people of color and I go by what people do, not what other people say about them.”

“It’s always racism, sexism, and xenophobia and it’s getting tired,” she said.

Mr. Conway has long been critical of the President on social media, describing some of Trump’s behavior as “absurd” and expressing criticism of Trump’s immigration policies.

He actually came to the President’s defense when a former adviser accused him of using racial slurs.

The allegation is not credible, and indeed is ridiculous, particularly in light of the timing of her departure from the White House—December 12, 2017. It’s absurd all around.

Look at that! It must have been before jealousy over his wife’s success made him crazy.

Those allegations, however, were just as ridiculous and absurd as what Conway is suggesting about the President today.

Trump has lashed out at Conway in the past, mocking him as “Mr. Kellyanne Conway” and calling him “a stone-cold loser [and] husband from hell.”

We think he may have been on to something there.