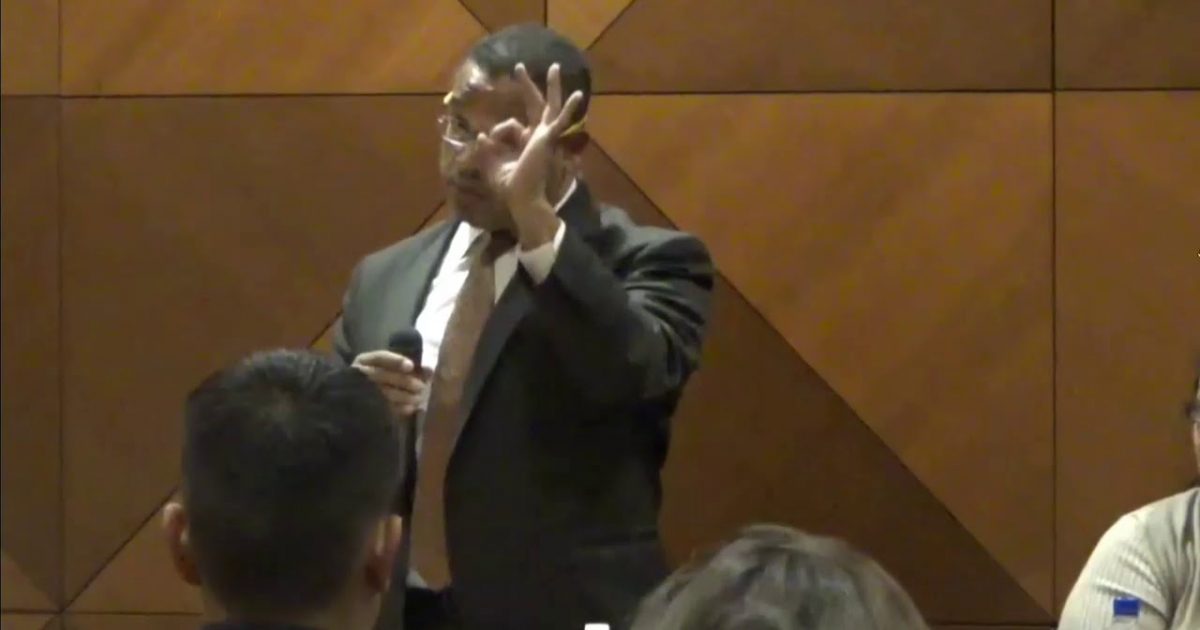 Minnesota Rep. Keith Ellison, the vice chairman of the Democratic National Committee, evoked the Holocaust on Monday, comparing illegal immigrants in the U.S. to Jews in Nazi Germany.

“I’m going to tell you right now, I’m one of them people who believes you should give your neighbors sanctuary.

(…)If you ask yourself, ‘What would I do if I was a Gentile in 1941 if my Jewish neighbors were under attack by the Nazis? Would I give them sanctuary?’ — you might be about to find out what you would do. Will you pass that moral test, or will you fail it? This is the time for people who truly have faith and belief in their hearts to step up and demonstrate.”

It is always disgusting when someone uses the Holocaust to score political points, but it particularly sleazy when Congressman Ellison does it. After all, the guy supports anti-Semitic organizations such as Louis Farrakhan’s Nation of Islam and the terrorist Muslim Brotherhood.

During Ellison’s run for Congress in 2006, The Washington Post reported that Ellison had defended Farrakhan against accusations of Antisemitism in 1989 and in 1990 as well as calling affirmative action a “sneaky” form of compensation for slavery, calling instead for reparations

Also during Ellison’s initial congressional campaign, Scott Johnson of the must-read site PowerLine,, exposed Ellison’s Antisemitism and work with Louis Farrakhan in a Weekly Standard piece.  One incident he described, occurred in February 1997 when Ellison was a practicing attorney:

Ellison appeared as a local spokesman for the Nation of Islam with the last name “Muhammad.” He spoke at a public hearing in connection with a controversy involving Joanne Jackson of the Minnesota Initiative Against Racism (MIAR). Jackson was alleged to have said, “Jews are among the most racist white people I know.” Jackson denied making the statement or insisted that it had been taken out of context. Ellison appeared before the MIAR on behalf of the Nation of Islam in defense of Jackson’s alleged statement. According to the Star Tribune and the full text of the statement published in the Minneapolis Spokesman-Recorder, Ellison said:

Speaking for the Nation of Islam, Ellison appeared before the MIAR in defense of the truth of Jackson’s alleged statement. According to the Star Tribune and the full text of the statement published in the Minneapolis Spokesman-Recorder, Ellison said, ‘We stand by the truth contained in the remarks attributed to [Ms. Jackson], and by her right to express her views without sanction.’ He finished his comments with, “Also, it is absolutely true that merchants in Black areas generally treat Black customers badly.”

Since entering Congress Ellison has used every opportunity possible slam Israel, and even worse placing the people living in the Jewish State in mortal danger.

In 2014, Ellison was one of only 8 members of Congress voting against a bi-partisan bill to provide $225 million to Israel’s “Iron Dome” missile defense system (vs. 395 who voted for it).   Think about that one for a moment, how many times in recent years have 395 members of Congress agreed on anything?

Ellison is a featured keynote speaker at many BDS organization events including the American Friends Service Committee which runs a BDS boot camp, Progressives for Palestine, and is a favorite of the anti-Israel group ironically called Jewish Voice for Peace. In a rare occurrence of disagreeing with progressives, The Jewish Voice for Peace was named by the Anti-Defamation League as one of the 10 most anti-Israel organizations in America (I am sure their mothers are proud).

There are many more examples of Ellison’s, anti-Israel and anti-Semitic actions, plus his connection to Muslim Brotherhood/Hamas associated groups such as MAS, CAIR, and ISNA. (MAS even paid for his Haj to Saudi Arabia). CAIR deserves special scrutiny because of documented proof that it was founded by members of a U.S.-based Hamas support network created by the Muslim Brotherhood.

The Council on American-Islamic Relations (CAIR)  was tied to international terrorism and Hamas during the Holy Land Foundation trial.

In 2008 the word GUILTY was read in a Dallas courtroom a total of 108 times, as a jury convicted the Holy Land Foundation and each of the associated defendants of raising money to fund Hamas terrorism. Implicated along with those convicted was supposed Civil Rights organization CAIR, the Council on American-Islamic Relations and scion of the Muslim Brotherhood,  which lobbies the government from its headquarters in Washington DC. Despite the fact that CAIR was named an unindicted co-conspirator in the Holy Land case, its leaders are frequent guests Network News Programs, where they are usually called upon to whitewash some terrorist act, and now marching in a parade to honor our heroes, some of whom fought in the war on terror.

Hamas is an offshoot of the Muslim Brotherhood, and trial exhibits show the Brotherhood created the Palestine Committee. CAIR officials adamantly deny any involvement with either Hamas or the Muslim Brotherhood. A Letter sent from Assistant AG Welch in 2010, however, shows that the Department of Justice has not wavered in its conclusion that the internal records it possesses prove a connection.

The Brotherhood is an Egyptian religious/political movement which aims to spread Islamic law throughout the world. The Hamas support by CAIR founders documented in the terror-financing trial of the Holy Land Foundation for Relief and Development prompted the FBI to cut off communications with CAIR in 2008. CAIR’s access reportedly could be restored if it pledged not to support Hamas. CAIR officials have rejected that pledge.

The FBI identifies CAIR as an arm of the Muslim Brotherhood in America. In 2009 they cut off all relations with CAIR because of its terrorist affiliations. CAIR contends that the FBI changed their minds in 2010, but the law enforcement agency publicly reaffirmed that dissociation in 2013.

By his associations with anti-Semitic hate groups alone, Keith Ellison soils the memory of the people who died in the Holocaust just by making the comparison. But there is more:

The reference would be appropriate refugees were forced to tattoo numbers on their arms. Hitler chose that method of identifying the Jews because tattooing is prohibited in the Jewish faith (he didn’t realize that people couldn’t be punished for forced tattooing). Either way, I haven’t heard of one illegal immigrant forced to put tattoos on their arms:

The Nazis conducted horrible painful medical experimentation on humans, are American doctors doing that to Illegal Immigrants? Perhaps the most well-known of which was the experiments that Josef Mengele conducted on twins and other victims at Auschwitz, through these experiments he hoped to prove the superiority of the Aryan race. He experimented on over 1,500 pairs of twins and other Jews and Gypsies, injecting dye into their eyes blinding them, or chloroform into their hearts killing them, sew twins together trying to create conjoined twins, forcing them into freezing water (like the picture below), and other experiments too horrible to repeat.

After the Nazi’s gassed their victims they collected their hair, their clothes, glasses, gold teeth, and even artificial limbs to be used by the Reich. Perhaps I was watching “Judge Judy” instead of the news the day we started doing that to illegals. If I didn’t miss it, well then there is no comparison to the Holocaust.

The truth is Illegal Immigrants were never forced to put tattoos on their arms or crowded into death camps where they would suffer torture till they were gassed, shot, thrown in ice water, or died some other horrible death. Their corpses were never mutilated by taking out what could be reused. And they never had bodies thrown en masse into crematoriums such as the one below:

But then again, what should one expect from a Congressman who supports so many anti-Semites?

There are plenty of other reasons why the comparison is wrong, but those are political. I will just leave it at the fact that any reference to the victims of the Holocaust for political purposes is wrong.  But coming out of the mouth of someone who associates with anti-Semites, and votes against defensive missiles to prevent terrorists from attacking innocent Jewish civilians makes his use of a Holocaust analogy sleazy beyond words.

The video of Ellison’s repulsive comments is below.