Kavanaugh Facing Typical Liberal Slander Strategy: Those Who Disagree Must Be Destroyed 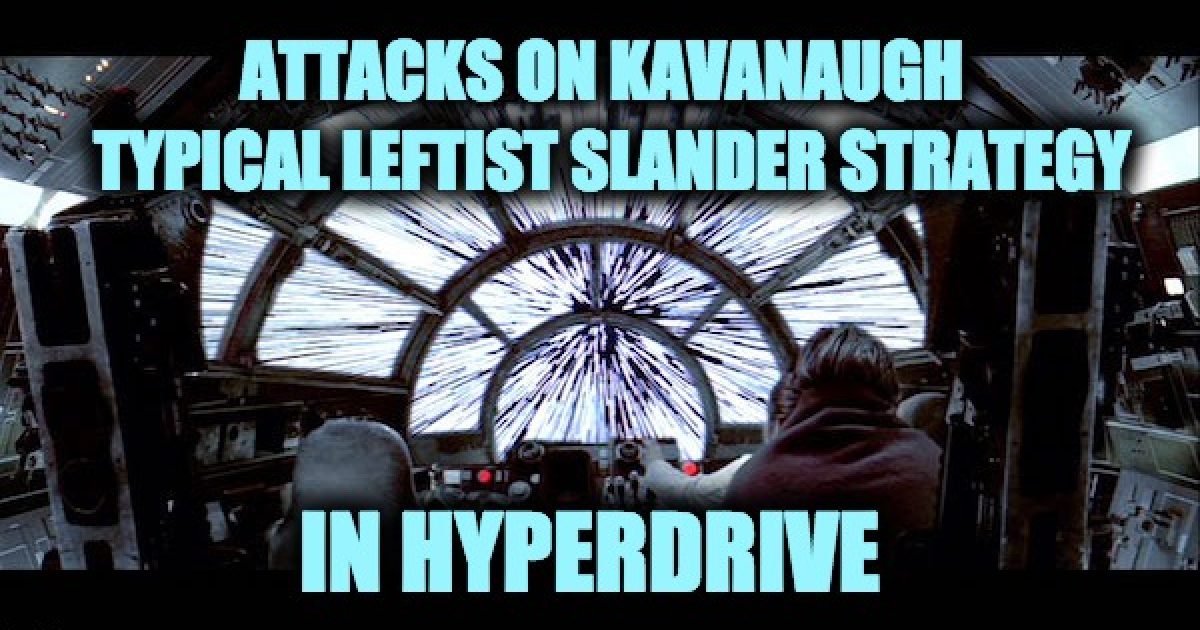 They did it with the Tea Party who they labeled as violent extremists and racists. They did it with anyone who disagreed with Barack Obama’s policies which they claimed only did so because he was black. And of course, everything President Trump does is driven by his loyalty to Putin or his bigotry. The  Democrats attacks on Bret Kavanaugh is a typical progressive strategy anyone who disagrees with them must be destroyed, only this time they’ve gone into hyperdrive

In early September it looked like Bret Kavanaugh was sailing toward confirmation and would soon be on the Supreme Court. He was a brilliant pick by President Trump, Kavanaugh was a respected jurist who earned the highest endorsement from all relevant legal organizations. But the liberals were not happy, they didn’t want another originalist on the court, someone who would follow the constitution rather than legislate from the bench.

They began to throw out charges, he would take away health care from children, destroy minority voting, and finally the big kahuna he would vote to overturn Roe v. Wade. None of it worked.

Then on September 5th Chuck Schumer (D-NY) received a letter from thirteen different progressive groups telling him that he wasn’t fighting against Kavanaugh hard enough. According to the loony thirteen, “the Supreme Court is on the line, and you [Sen. Schumer] are failing us.” They say that “the Democratic Party’s progressive base expects nothing less than all-out resistance to “criminal co-conspirator like Donald Trump’s” dangerous agenda,” and  “Kavanaugh is an extremist who will help institutionalize Trump’s hate for a generation.”

They said Schumer and his Democratic Caucus wasn’t cutting it.

Your job as Senate Democratic leader is to lead your caucus in complete opposition to Trump’s attempted Supreme Court takeover and to defend everyone threatened by a Trump Supreme Court. But unbelievably, nearly two dozen Democrats have still not come out against Kavanaugh, and just last week, you helped Majority Leader Mitch McConnell fast track 15 Trump judicial nominees. That is not the leadership we need

Miraculously a week later, Schumer’s hitman on the Judicial Committee Dianne Feinstein went to the nuclear option–character assassination. She released a letter that she had been holding on to for almost two months:

I have received information from an individual concerning the nomination of Brett Kavanaugh to the Supreme Court. That individual strongly requested confidentiality, declined to come forward or press the matter further, and I have honored that decision. I have, however, referred the matter to federal investigative authorities,” she said.

Dr. Christine Blasey Ford claimed she was sexually assaulted by Kavanaugh “in a suburban Maryland area home at a gathering that included me and four others.” story had major holes, she didn’t know when the when the “gathering” occurred and who’s Maryland home hosted the party. The timing was very suspicious coming more than two months after Kavanaugh was nominated, six weeks after Feinstein got the letter and a week after Schumer received his warning letter from the thirteen major progressive groups and the day before the vote. Dr. Ford named four people besides her who was at the party. All four denied having the slightest knowledge of being at the party.

Ford’s story was falling apart, the liberals realized they could no longer destroy Kavanaugh, so they found another “victim.” Conveniently the day after the final supposed witness of the Ford incident denied any knowledge, another decades-old claim popped up. This time Brett Kavanaugh was charged with exposing himself to college classmates. The claim by Debbie Ramirez that the federal judge sexually harassed her during a Yale University party was published by The New Yorker.

A new allegation against Supreme Court nominee Brett Kavanaugh surfaces, this time from his years at Yale. The latest from me and @JaneMayerNYer: https://t.co/o8nTmjw2Vg

This story has less credibility than the Ford story.  The New Yorker said it couldn’t prove the story but published it anyway. In fact, the liberal NY Times poked holes in the story:

In a statement, Judge Kavanaugh denied the allegation from the woman, Deborah Ramirez, and called it “a smear, plain and simple.” The New Yorker did not confirm with other eyewitnesses that Judge Kavanaugh was at the party.

The Times had interviewed several dozen people over the past week in an attempt to corroborate her story, and could find no one with firsthand knowledge. Ms. Ramirez herself contacted former Yale classmates asking if they recalled the incident and told some of them that she could not be certain Mr. Kavanaugh was the one who exposed himself.

The Times interviewed dozens to corroborate 2nd allegation against Kavanaugh and could find no one with firsthand knowledge. Ramirez told ex-classmates she couldn’t be certain Kavanaugh was the one who exposed himself. ⁦@SherylNYT⁩ ⁦@npfandos⁩ https://t.co/lGVc4hJzEU

“I am writing to request an immediate postponement of any further proceedings related to the nomination of Brett Kavanaugh,” the letter reads. “I also ask that the newest allegations of sexual misconduct be referred to the FBI for investigation and that you join our request for the White House to direct the FBI to investigation the allegations of Christine Blasey Ford as well as these new claims.”

Folks these charges against Kavanaugh are the typical liberal modus operandi, destroy anyone who disagrees with them. They started with simple name calling, followed during the hearings with events such as “Spartacus” and Kamilla Harris heavily editing a video to make it look like the Judge was lying, and a Mexican-Jewish woman making white-supremacist signals.

But Once Schumer was criticized by the progressives, liberals moved from simple name calling to a slanderous attack smearing the reputation of a good man.   All without evidence. The timing of these charges, and their lack of corroboration prove again they have nothing to do with Kavanaugh’s attitudes about women and everything to with the fact that he believes that Judges have to stick to the constitution without legislating from the bench.

The progressives held Chuck Schumer’s feet to the fire, and he directed Feinstein to cheat. So we now have character assassination in hyperdrive.  Not only should the GOP start calling these charges what they really are, typical nasty Democratic Party politics and confirm Kavanaugh’s nomination,  but they should investigate Feinstein for ethics violations.  The rest is up to us.  Conservatives must double their efforts to ensure that the GOP not only keep their majorities, but widen them.  If the Democrats take over these, nuclear character assassinations like the slanders directed at Kavanuah will become more commonplace.