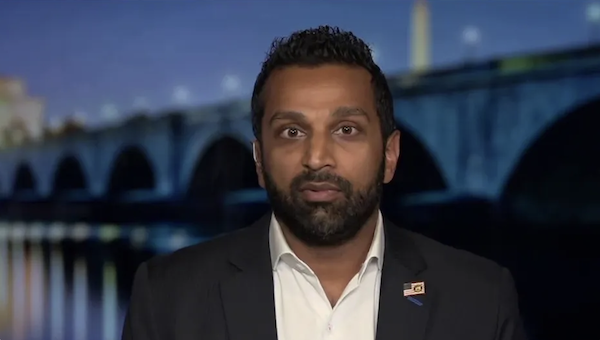 When he is not saying HUH? What’s Afghanistan? The official excuse Biden and his team keep giving about the botched Afghan pull-out us is that their hands were tied because Trump had backed Joe into a corner with a drop-dead date for leaving. The OTHER part of their excuse was that there ‘was no plan.’ So… which is it? Those two ideas seem to be at odds with each other, don’t they? That’s because, just like much of what comes out of the Biden administration, these two excuses are more full of crap than a porta-potty on the last day of a state fair.  Kash Patel

John Solomon invited Kash Patel on his podcast.  Patal has had a long career in government service, most recently as the Chief of Staff for Trump’s Acting Secretary of Defense Miller to explain some of Lyin Joe Biden’s claims.

First off, as many of us have said before, there was no ‘date certain’ by which America was obligated to leave. Every detail of this ‘negotiated departure’ was explicitly understood to be ‘conditions-based.

If specific benchmarks for moving forward were not achieved, there would be no forward progress on the departure schedule. Period. Any dates mentioned would be adjusted as needed.

Under the Trump plan, the Taliban and the Afghan government had to meet specific criteria if they wanted the U.S. to help them establish “a peaceful, negotiated government in Afghanistan without U.S. troop presence,” Patel explained. “The main component of that was an all-out rejection of al Qaeda and ISIS.”

If the Taliban and then-Afghan government wanted U.S. funds, “training and assistance in some form of military presence,” they would all “have to sit down at the table with each other, like they were doing in Doha,” Patel continued, and the U.S. would assist them in reaching an agreement for an interim government with then-President Ashraf Ghani.

According to the plan, the withdrawal was to be done correctly instead of the arse-backward way failure Joe did it.

…”American citizens would be drawn out first, safely, and we would identify them through the process that is in place when you methodically do something with the military, the State Department, and the intelligence community,” he explained. “There’s a difference when you evacuate versus proactively go get them.”

As for the plan for leaving Bagram Air Base, Patel said that it was “the very last thing we do in country after Americans were out, after our equipment was out and/or destroyed, after the thousands of detainees at Bagram were adjudicated” and airlifted out of the country.

Getting our people out then and not leaving any working military equipment? What a concept!

The administration also talked about big-picture solutions like peace deals, the harboring of terrorists, the protection of American citizens, and having a plan for all of our equipment.

It is unthinkable that under Trump’s plan, we could have seen images of Taliban terrorists filming themselves with their ‘loot’ of American guns, equipment, Humvees, helicopters, not to mention an unthinkable amount of money in stacked U.S. dollars so carelessly left behind.

And yet, somehow, the ‘big brains’ in Joe’s Administration did precisely that (and we are using the word brains, very loosely).

And we all know why they did it, don’t we?

Because the man who used to be called the dumbest man in the Senate is now the President of The United States.