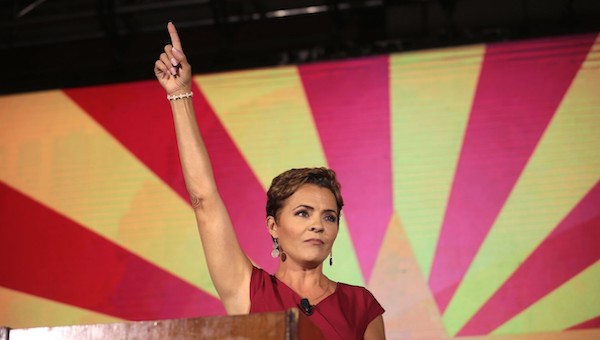 I’ve probably written enough about the 2022 election — some say it wasn’t that discouraging for Republicans — but it certainly could’ve been better without several lackluster candidates who blew winnable elections. Kari Lake

While the Republicans were quixotic when they thought about winning in gubernatorial races in Colorado, Minnesota, or New York, winning in Arizona is certainly within reach. Even with a disastrous Republican chair who’s destroyed the party for years, the Arizona governor’s race was winnable, considering the current governor was an excellent conservative, Republicans had good primary options, and Democrats ran their own crazy woman.

She and MAGA populists have again been rejected by Arizonans. And it didn’t have to be this way.

In the U.S. House, Arizona Republicans held onto six of the Grand Canyon state’s nine seats this month, capturing the popular vote across those races by a 14-point average.

A decent Republican candidate would have cruised to victory. Lake failed despite her years as a local TV anchor and telegenic personality.

Polls showed she took the lead in September, breaking 50%, and led by 3.5 points on Election Day.

And still, she blew it. Why?

She also somehow lost 12% of voters who disapproved of President Joe Biden.

The decisive margin of her defeat came from a conglomeration of educated, moderate women who disliked Donald Trump and didn’t believe the 2020 election was rigged. And Lake was stubborn and cultist enough to tell that electorate she’s a “stop the steal” candidate.

What does this mean? Lake would have won if she had run as a standard Republican, like the late Sen. John McCain, who easily won six statewide races.

Taking a sordid page from Trump, Lake won’t concede and is assembling lawyers and supposedly collecting evidence of voters she claims struggled to cast ballots on Election Day. A former Democrat, Lake is using left-wing sophistry about “voter suppression,” which is nonsense.

She will join other Arizona losers, like Mark Finchem, a “stop the steal” candidate for Arizona secretary of state and the unctuous Blake Masters. They handily lost his U.S. Senate race.

Why the heck did Lake go all in on the “stop the steal” lies in a purple state? We have now proven that fringe view is poison in a general election. “Stop the steal” radicals are not as prevalent as the left says, but they did lose key Senate and House races in purple and red districts from Washington State and Michigan to North Carolina.

One need not love McCain’s politics to recognize that he was a winner in Arizona. He never lost an election in Arizona. In 2000, he beat George W. Bush in the Arizona Republican primary by 25. In 2008, he beat Barack Obama in the presidential election by nearly 9 points.

A dozen years ago, McCain annihilated a zany primary challenger called J. D. Hayworth by 23, and in 2016, execrable Ward challenged him, and McCain kicked her ass. That same year McCain ran five points ahead of Trump in Arizona.

Lake had political talent and, at the very least, would have helped Arizona secure its southern border as governor, but rather than emulate Gov. Doug Ducey, her atrocious judgment and lack of common sense doomed her.