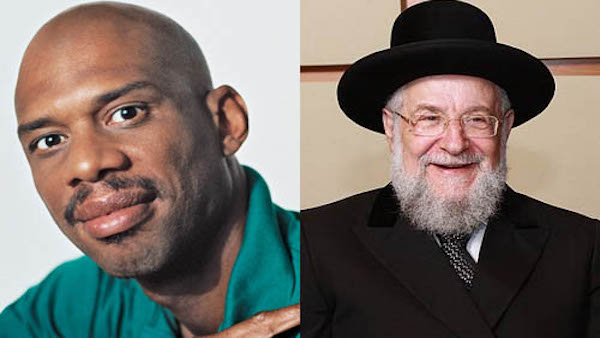 My wife sent me this story she read on the Facebook Page of Rabbi Yisroel Bernath. The good Rabbi explained how something in the past of NBA all-time great Kareem Abdul-Jabbar may have motivated him to speak out against hatred and Antisemitism so forcefully.

Rabbi Bernath has given me permission cross-post the story from his Facebook page and share it with my readers, it follows below:

Legendary Laker Kareem Abdul-Jabbar recently spoke out loudly and forcefully against the pervasive Antisemitism in Hollywood and professional sports. His condemnation, though refreshing, is not surprising.

On April 11, 1945, the American third army smashed through the gates of the infamous concentration camp known as Buchenwald. The horrors of what they found there shocked soldier and general alike.

Gen. Eisenhower, knowing that one day there would be those who would attempt to deny those horrors ever took place. Therefore he made the local German population participate in the burial of the thousands of murdered men, women, and children, whose bodies lay exposed throughout the camp.

One of those American liberators was Ferdinand L. Alcindor. As a black man who knew personally, the experience of discrimination and hate, he was profoundly moved.

Seeing a little Jewish boy standing between the survivors, he hoisted him up and held him high above the heads of the Germans standing there.

“Look at this sweet kid,” he hollered, “he isn’t even eight yet. This was your enemy, he threatened the Third Reich. He is the one against whom you waged war, and murdered millions like him.”

Ferdinand never forgot what he witnessed. On his deathbed, he asked his son to travel to Israel and track down that little boy he had hoisted above his strong shoulders all those years ago. A promise his son would keep in 2011.

Ferdinand’s son was born Ferdinand Lewis Alcindor Jr., though you know him as Kareem Abdul-Jabbar, that little Jewish boy who survived Buchenwald, would grow up to become the Chief Rabbi of Israel, Rabbi Yisroel Meir Lau.

The lesson Rabbi Yisroel Bernath in the story above and Kareem Abdul-Jabbar tells in his condemnation of Antisemitism last week, is the same:

The lesson never changes, so why is it so hard for some people to learn: No one is free until everyone is free. As Martin Luther King Jr. explained: “Injustice anywhere is a threat to justice everywhere. We are caught in an inescapable network of mutuality.” So, let’s act like it. If we’re going to be outraged by injustice, let’s be outraged by injustice against anyone.