Kanye On Infowars: Insults Jews, Blacks, And His Own Face 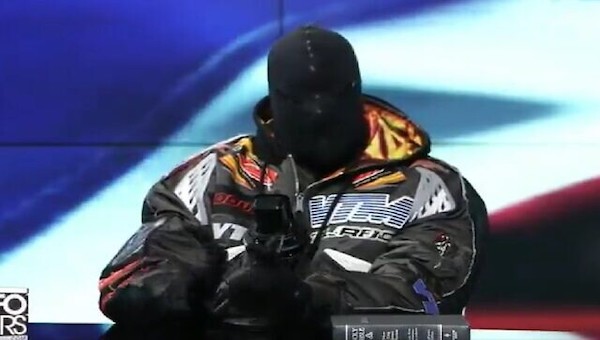 It’s a rare moment when Alex Jones is doing his show, and he’s not the craziest man in the studio. But today’s guest on Infowars was a man who is nuttier than a porta potty at a peanut convention. ye West is a man who has spewed anti-Semitism since 2013. and has gotten much worse over the past few months. Today, however, West dropped even lower,  Saying Hitler had a good side and put Satan, Nazis, and Zionists were alike. It got crazy that Alex Jones, a man who owes about a billion dollars in a lawsuit for saying a mass murder of kids didn’t happen, was trying to get Ye to withdraw his idiocy.

Alex Jones: The Nazis were thugs.
Kanye West: "But they did good things too. We gotta stop dissing the Nazis all the time." pic.twitter.com/hCdZIYoGqr

Did you notice that Ye was wearing a mask that covered his face? He must think he’s very ugly.

The NY Post published a few of his best rants:

“I see good things about Hitler, also,” the rapper who changed his legal name to Ye told Jones on Thursday. “Every human being has value that they brought to the table, especially Hitler.”

“I was thinking about Satan,” Ye continued. “Whether it’s the Zionists or Hitler — it’s not the person. It’s Satan using the people, who are controlled by demonic forces.”

Ye elaborated, telling Jones: “The Jewish media has made us feel like the Nazis and Hitler have never offered anything of value to the world.”

“Meanwhile, there’s all of these things that are happening.”

“If I say something derogatory about the Mossad, is that mossa-gynistic?” Ye joked.

Jones lightly pushed back on Ye, telling him: “I think most Jews are great people. But I agree there’s a Jewish mafia.”

Jones added: “I’m not on that whole Jew thing.”

Ye replied that “his accounts were frozen” and that he was threatened with prison time.

Accounts frozen? Hey ye, if the Jews controlled the banks, your cash card would have stopped working years ago.

Ye’s opinion of Hitler is not just an attack on Jewish people. The bastard with the funny mustache Hitler wasn’t a big fan of Black people either.

Although no exact figures exist, it is known that a significant number of black people were detained in concentration camps and forced labor camps during the Nazi reign and that many were murdered. Nonetheless, there seems to be little interest in Hitler’s black victims. Their plight is not talked about enough.

Nazis were virulent racists. In 1935, after the enactment of the notorious Nuremberg racial laws, which designated black people as a minority with “alien blood,” many left Germany. Those who remained were isolated and suffered horrendous racial abuse. And while the exclusion of black children from public schools became official policy in 1941, it is a matter of record that they had long suffered racist abuse in their classrooms.

Although they weren’t targeted for total extinction like the Jews, “they were denied their human rights, sterilized, persecuted, experimented upon and murdered in camps.” We’re talking about practices that most humans would find horrible, but not ye because his brain isn’t wired correctly.

Soon after his Hitler love-fest, Parler, the company he was supposed to buy, tweeted:

In response to numerous media inquiries, Parlement Technologies would like to confirm that the company has mutually agreed with Ye to terminate the intent of sale of Parler. This decision was made in the interest of both parties in mid-November.

Mid-November, but they waited until today to release the information? Am I supposed to believe them?