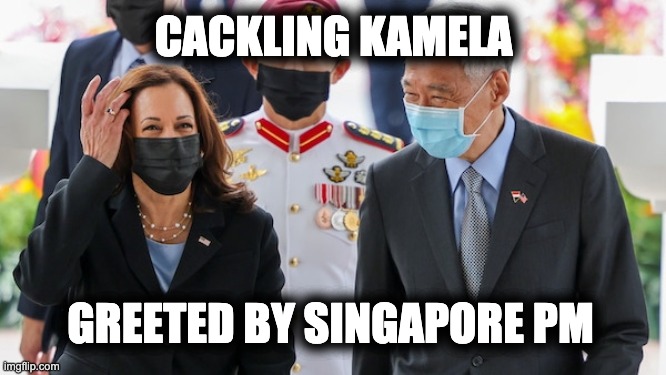 If Kamala was hoping this excursion would take some of the heat off her for things going sideways in Kabul and the heat she’s taking for her dereliction of the border, she was disappointed. Kamala’s Singapore visit.

The crisis unfolding in Kabul was very much on everyone’s mind, even in Singapore. Time to get the Americans and the Afghans who helped the war effort out of danger is quickly running out.

Simply put, America’s credibility is now on the line.

Singapore Prime Minister Lee Hsien Loong said during a Sunday press conference with Vice President Kamala Harris that he believed after America’s “awry” withdrawal of troops led to the fall of Afghanistan, global perceptions of our image would be determined in the days ahead.

“What will influence perceptions of U.S. resolve and commitment to the region will be what the U.S. does going forward: how it repositions itself in the region, how it engages its broad range of friends and partners and allies in the region, and how it continues the fight against terrorism,” Lee said. “Countries make calculations and take positions, and they have to make recalculations and adjust their positions from time to time. Sometimes it can be done smoothly. Sometimes there are hiccups. Sometimes things go awry and take time to put right.”

Prime Minister Lee of Singapore seems to be a very well-trained kisser of the American administration’s hindquarters.

Poor Kamala. Not only is she working hard not to deal with the mess at the border, which she helped to created and has ignored, but now she’s got to tap dance around Biden’s mess in Afghanistan, which she helped to create. Remember, Kamala said she was the last person in the room, although we don’t know if it was because she was the last person to give Biden advice or she wanted to wait till everyone left so she could get the last donut.  And on top of everything else, she is not allowed to cackle.

In case we need reminding that the stakes here are real…

Russia has said it will hold joint maritime exercises with China and Iran in the coming months, in an announcement timed to show support from Moscow and Beijing to Tehran in its confrontations with Washington, an analyst said.

Joe could call Trump ‘Putin’s puppy’ all he wants, but the world knows which President is really Putin’s dog… just look at which one gave Putin back his pipeline. On the other hand, he should be happy he’s not Andrew Cuomo’s dog,  abandoned by the Luv Guv as he moved out of the Executive Mansion.