Kamala Staffers Say She’s Is A Mean, Morale-Destroying Bully As A Boss 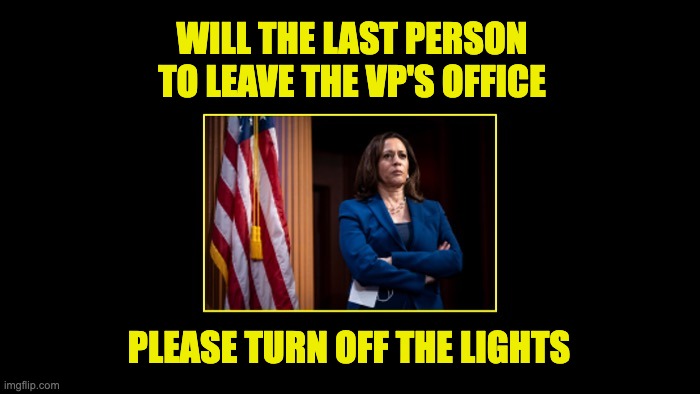 Gee Whiz, Joe Biden didn’t need another reason for people to trash the job he’s doing, but apparently, it started with his first decision as a nominee—Kama Harris. In ten short months, the words have changed from “Call it the Biden-Harris administration” to “will the last person quitting their job working for the Vice President, please shut the lights.” Recently the parade of people leaving Harris’ employ seems as big as the parade of illegal immigrants crossing the southern border that the V.P. was supposed to fix.  Kamala staffers

This past weekend Politico reported that “key members of Harris’ orbit are leaving and even more are eyeing the exits.”

On June 30, 2021, Politico reported that the V.P.’s office was dysfunctional:

Her presidential campaign operation imploded in a painful maze of finger-pointing and leaks. Harris jettisoned nearly everyone from that campaign and returned to the Senate in 2020 with her government staff and a small outside political operation in tow. When she was put on the presidential ticket, she was given a staff of mostly handpicked, trusted aides from Bidenworld. It did the job. The team avoided the spiral of internal backbiting.

Five months after the Politico story, the very liberal Washington Post published its report on Harris’ management skills based on interviews with 18 people connected to Harris:

Gil Duran, a former Democratic strategist, and aide to Harris who quit after five months working for her in 2013. In a recent column [for the San Francisco Examiner]he said she’s repeating “the same old destructive patterns. “Who are the next talented people you’re going to bring in and burn through and then have (them) pretend they’re retiring for positive reasons,” he told The Post.

Staffers who worked for Harris before she was vice president said one consistent problem was that Harris would refuse to wade into briefing materials prepared by staff members, then berate employees when she appeared unprepared.

“It’s clear that you’re not working with somebody who is willing to do the prep and the work. With Kamala you have to put up with a constant amount of soul-destroying criticism and also her own lack of confidence. So you’re constantly sort of propping up a bully and it’s not really clear why.”

The latest departure from Harris’ office is Symone Sanders, the V.P.’s chief spokesman and advisor announced she was leaving by the end of the year. Her announcement came three weeks after the White House announced that Harris’ communications director, Ashley Etienne, was leaving to pursue other opportunities. Notice that announcement came from the White House, not Etienne. Sanders says it has nothing to do with Kamala Harris. She just wanted to move on to different opportunities.

A former top Biden aide, Anita Dunn, praised Sanders in a CNN interview, saying she was “an extraordinary talent.”

“Symone has been working at the highest levels and in an extraordinarily intense environment for three years for Joe Biden. And now also for Vice President Harris,” Dunn said. “When you look at the three years, two on the campaign, one in the White House, nobody can question her decision that she needs a break and it’s time to move on. And she’ll always be a member of the Biden-Harris family.”

If you believe Sanders left because she needed a break, I have a bridge in Brooklyn to sell you. Symone Sanders had risen quickly in her seven years in politics. She gained a job with the V.P., the second-most powerful office in the country, in an incredibly important position. Her next step would be to work for the President, not to leave the administration totally.
Politico and WAPO each explain that Kamala Harris is a mean morale-destroying bully as a boss. And I would suggest that the way Kamal Harris acts as a manager has more to do with Sanders’ exit than wanting a break.
In my three decades working in corporate America, I learned that bosses who managed the same way Harris is reported to act, directed that way because their jobs were way over their heads. In other words, as bad as Joe Biden is as the Chief Executive of the U.S. (and he is awful), Kamala Harris would probably be much worse.
Kamala staffers
Kamala staffers
Kamala staffers
https://lidblog.com
Facebook Twitter Flipboard