Is Unemployment Frying His Brain? 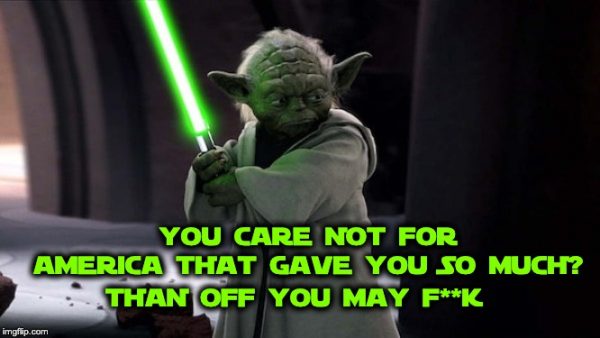 We’ve heard a lot of stupid coming from the left these days regarding the strike that took out Iranian terrorist leader Qasem Soleimani.  On Saturday, the Daily Wire reported that unemployed NFL quarterback Colin Kaepernick — a man not known for his love of America — suggested racism was behind the attack in which Soleimani was killed.

There is nothing new about American terrorist attacks against Black and Brown people for the expansion of American imperialism.

America has always sanctioned and besieged Black and Brown bodies both at home and abroad. America militarism is the weapon wielded by American imperialism, to enforce its policing and plundering of the non white world.

The Daily Wire said his tweets sparked a furious backlash from a number of people.

Shut the hell up and sit down, moron. America is the reason that most of the world is free and not speaking German. You’re out of your depth. Until you’ve picked up a rifle and served this country, you don’t have the credibility to criticize our men and women in the military.

Solemani killed many black and brown people in Iraq, in the U.S. Military, and even in Iran. Oh, and he was declared a terrorist by Barack Obama.

Soleimani and his terrorist unit known as the Quds Force killed over 1,500 unarmed Iranian freedom demonstrators in the past few months so maybe you should find a way to condemn this terrorist while you’re calling out the US leadership and military.

I hear you, Marine. I'm tired of his whining. My goodness! Thank you for serving. I bet Colin is too much of a coward to enlist.

Colin K coming out in defense of the Iranian regime is actually not surprising at all.

Perhaps someone told Kaepernick that Iran was forming a football team and Kaepernick wanted to be their QB.  After all, he is desperate to find a football job.

There is nothing new about liberals siding with terrorists while railing against white people in order to expand their bank accounts.

From an actual Iranian pic.twitter.com/IinsDMC0M4

Do you know how many brown people Qassem Soleimani has murdered? Do you know of the Syrian cities that have fallen because of him? Do you know of his role in inviting sectarianism in Iraq? Do you know anything about our peoples? Or is this yet another ignorant American take?

It sounds pretty ignorant to us.  But par for the course for idiotic America-hating liberals like Kaepernick. This is the guy who blew his last chance at getting back into the NFL because of his huge ego.

Kaepernick isn’t alone in this regard, as we’ve reported here, here, here and here.  In fact, it appears the left has decided they hate Trump so much they’re willing to side with America’s enemies.