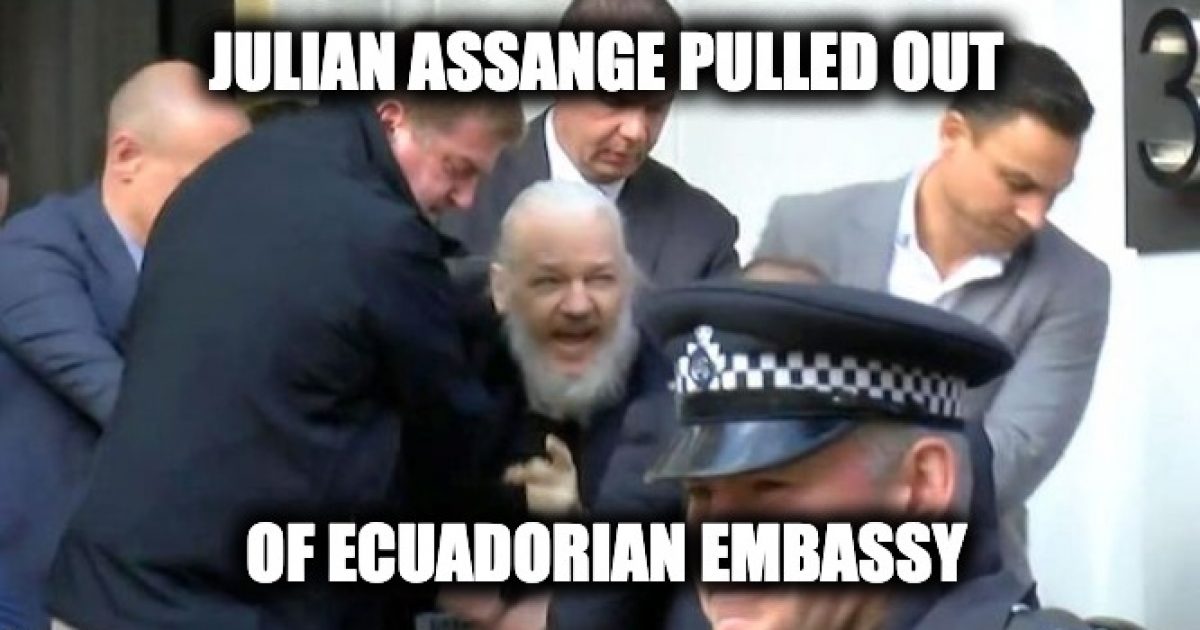 After being holed up the Ecuadorian embassy in Great Britain since 2012, Wikileaks founder Julian Assange was dragged out of the Ecuadorian embassy kicking and screaming, as British police arrested him on a court warrant dating back to 2012. British police had been waiting outside the embassy since he went in seven years ago, but today they did not have to wait for him to come out.  Equidor invited the British police to come inside and pull him out. Police authorities said Thursday they were holding Mr. Assange at a central London police station pending extradition to the United States.

Assange had grown a long grey beard making him look a bit like Rip Van Winkle.

Scotland Yard has confirmed that Assange was arrested on behalf of the US after receiving a request for his extradition.

In a statement it said:

Julian Assange, 47, (03.07.71) has today, Thursday 11 April, been further arrested on behalf of the United States authorities, at 10:53hrs after his arrival at a central London police station. This is an extradition warrant under Section 73 of the Extradition Act. He will appear in custody at Westminster Magistrates’ Court as soon as possible.

As one would expect Wikileaks, the company founded by Assange was not happy with the news

URGENT: Ecuador has illigally terminated Assange political asylum in violation of international law. He was arrested by the British police inside the Ecuadorian embassy minutes ago.https://t.co/6Ukjh2rMKD

Assange’s presence in the embassy had been in doubt since the 2017 election of  Lenín Moreno as President of Ecuador, who has described him as a “stone in our shoe” and said his continued presence at the embassy was unsustainable.  Shortly after the arrest,  Moreno released a video statement explaining his government’s decision to withdraw the Australian activist’s asylum.

“Today, I announce that the discourteous and aggressive behavior of Mr. Julian Assange, the hostile and threatening declarations of its allied organization, against Ecuador, and especially, the trangression of international treaties, have led the situation to a point where the asylum of Mr. Assange is unsustainable and no longer viable,” Moreno said.

“Ecuador sovereignly has decided to terminate the diplomatic asylum granted to Mr. Assange in 2012,” he added.

In particular, Moreno highlights the leak of Vatican documents in January 2019. According to Moreno, this proves that Assange is still linked with WikiLeaks — he thinks that Assange interferes in internal affairs of other states.

“The patience of Ecuador has reached its limit on the behavior of Mr. Assange: He installed electronic and distortion equipment not allowed. He blocked the security cameras of the Ecuadorian Mission in London. He has confronted and mistreated guards. He had accessed the security files of our Embassy without permission. He claimed to be isolated and rejected the internet connection offered by the embassy, and yet he had a mobile phone with which he communicated with the outside world.”

And the USA ?
This toxic coward of a President
He needs to rally his base? –
You are selfish and cruel.
You have taken the entire world backwards.

You are devils and liars and thieves.
And you will ROTT

And
WE WILL RISE ✊

Assange initially went to the embassy to flee charges of rape filed in Sweden, but his arrest was made at the request of the United States which looks to prosecute him for the Wikileaks release of secret U.S. information they received from Bradley, Now Chelsea, Manning. According to the U.S. government sources, those particular leaks led to the deaths of Americans.  If Assange is extradited to the U.S., it is certain that the FBI will also want to ask him how Wikileaks got those emails from John Podesta’s computer that provided dirt about the Hillary Clinton campaign,

UPDATE From the WSJ

U.S. Justice Department said Mr. Assange had been indicted in U.S. federal court on charges of a computer hacking conspiracy.

Prosecutors say, Mr. Assange, 47 years old, agreed to assist Ms. Manning in what it described as “one of the largest compromises of classified information in the history of the United States.”

The documents, most of which were State Department diplomatic cables and records relating to the Iraq and Afghanistan wars, were eventually published by WikiLeaks in one of the largest breaches of information in U.S. government history.

This is a breaking story and will be updated as more information comes out.