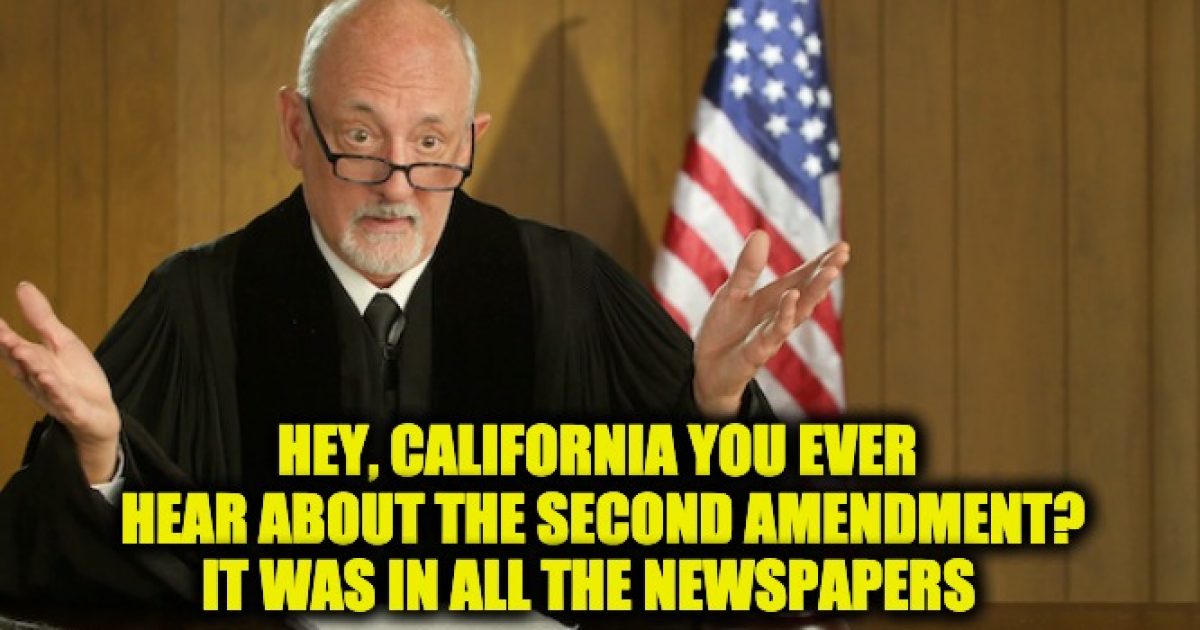 Political tremors are continuing in California and along the entire West Coast in the aftermath of last Friday’s ruling by a federal judge that the Golden State’s long-standing ban on “large capacity magazines’ is unconstitutional, with state Attorney General Xavier Becerra swiftly moving on the appeal process, and asking for a stay in the interim.

It was as though U.S. District Judge Roger Benitez had dynamited the San Andreas Fault.

The 86-page-ruling in Duncan v. Becerra literally shreds years of California gun control, with Judge Benitez making this observation on Page 62 of his decision:

“Ten years of a federal ban on large-capacity magazines did not stop mass shootings nationally. Twenty years of a California ban on large capacity magazines have not stopped mass shootings in California. Section 32310 is a failed policy experiment that has not achieved its goal. But it has daily trenched on the federal Constitutional right of self-defense for millions of its citizens. On the full record presented by the Attorney General and evidence upon which there is no genuine issue, whatever the fit might be, it is not a reasonable fit.”

Judge Benitez is a 2004 appointee by then-President George W. Bush. Because federal judicial appointments are for life, it sometimes takes years to see the benefit of such an appointment. President Donald Trump has been quietly filling federal court vacancies with judges who may be more enlightened on the Second Amendment, and don’t see their roles as being “activist” in nature. He’s even made a couple of appointments to the Ninth Circuit, which covers all of the Western states and is known for its strong liberal leanings.

The Benitez decision seems to cover all the bases regarding the ineffectiveness of the large capacity magazine ban, and in the judge’s learned opinion, the ban does not pass the constitutional smell test.

“That large capacity magazines are useful in military service, there is no doubt. But the fact that they may be useful, or even “most useful,” for military purposes does not nullify their usefulness for law-abiding responsible citizens. It is the fact that they are commonly-possessed by these citizens for lawful purposes that places them directly beneath the umbrella of the Second Amendment.”—Judge Roger Benitez, Page 66

Rights, according to the judge, are not subject to a popular vote. He made that abundantly clear when he wrote on Page 5 of his ruling:

“People may cede liberty to their government in exchange for the promise of safety. Or government may gain compliance from its people by forcibly disarming all. In the United States, the Second Amendment takes the legislative experiment off the table. Regardless of current popularity, neither a legislature nor voters may trench on constitutional rights. An unconstitutional statute adopted by a dozen jurisdictions is no less unconstitutional by virtue of its popularity.”

That, in essence, could be a death knell for California’s Proposition 63, approved by voters in 2016 and backed by then-Lt. Gov. Gavin Newsom, who is now the governor. As noted by the San Francisco Chronicle,

“A 2000 law had already made it illegal for Californians to buy or sell magazines that hold more than 10 cartridges, but it allowed people who already owned them to keep them. Prop. 63, among other provisions which tightened ammo regulations, went a step further by requiring anyone who owned such magazines to turn them in, remake them to comply with the law, or send them out of state.”

It might also take momentum out of efforts in Oregon and Washington to ban large-capacity magazines, not to mention the guns that use them.

If the Benitez ruling is upheld by the Ninth Circuit, or if it fails there and then goes to the U.S. Supreme Court, the outcome could be catastrophic for the gun prohibition movement.

The ruling effectively dismantles many of the leading gun control arguments, including the scary notion that just because a magazine holds more cartridges, it is somehow more dangerous in civilian hands.

“Nothing in the Second Amendment makes lethality a factor to consider because a gun’s lethality, or dangerousness, is assumed. The Second Amendment does not exist to protect the right to bear down pillows and foam baseball bats. It protects guns and every gun is dangerous.”—Judge Roger Benitez, Page 21

Judge  Benitez concluded that “California’s law prohibiting acquisition and possession of magazines able to hold any more than 10 rounds places a severe restriction on the core right of self-defense of the home such that it amounts to a destruction of the right and is unconstitutional under any level of scrutiny.” Benitez, who in 2017 issued a stay that prevented the law from taking effect, also agreed with the plaintiffs that the ban amounts to an unconstitutional taking of property without compensation.

This case is far from over, but it has had an earth-shaking first round.