DAY 2: Goldberg vs Pirro And It’s Heating Up 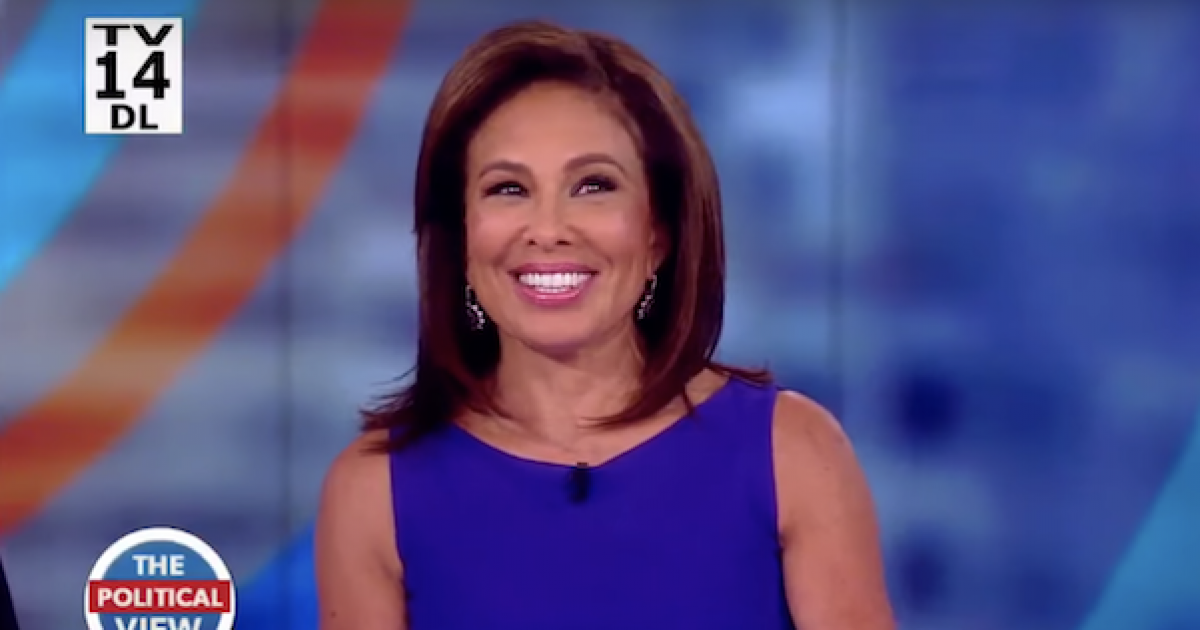 Judge Jeanine Pirro appeared on The View Thursday to “sell” her new book “Liars, Leakers, and Liberals: The Case Against the Anti-Trump Conspiracy,” and host Whoopi Goldberg whose birth name is Caryn Johnson went crazy (but more about the stage name later).  No really! Whoopi screamed at the Judge on-air, tossed her off the show, and then cursed the judge like an angry sailor. But according to the crazed Ms. Johnson, the story was entirely different.

Whoopi started with an anti-Trump opening statement. But the meltdown began with Republican-hating-Republican Ana Navarro asking a question

You just said you’re not an ideologue. Let me ask you a question. Do you think Donald Trump embraces and embodies conservative ideology? He used to have a different position on pro-choice. He is imposing tariffs. He’s against globalism. Do you think he’s an ideologue that is faithful to conservative policies?

After denying that she was there to talk about what type of conservative Trump was, Whoopi demanded, “You have to answer the question!” Pirro explained how better off the country was with Trump as president.

“You want to talk about Donald Trump? You tell me what metric in the country is worse off? Unemployment is lower than it’s been for 50 years. Minorities. Hispanics. African Americans,” she started to list off as the table erupted. Whoopi shook her head and told her to “Stop, stop.”

“Hate crimes are what’s up!” Navarro quipped as Hostin tried to claim that Obama was the one responsible for the country’s current economy. Pirro rebutted that claim.

“The GDP under Obama was barely 1. We’re going up to 4,” she shot back. Meghan McCain urged the importance for the hosts to understand why Trump was still garnering high support among Republicans.

“I also think it’s important as we said. 89% of the Republicans support him. He still has a huge popularity in the country. If Democrats don’t get their you know what together, he’ll certainly be re-elected,” she warned.

That’s when the Judge pushed Whoopi’s button and the host lost it. The Judge told Whoopi “You’re suffering from Trump Derangement Syndrome.”

“Listen, I don’t have Trump Derangement. Let me tell you what I have. I’m tired of people starting a conversation with Mexicans are liars and rapists.”

“What I suffer from is the inability to figure out how to fix this, That’s my issue.”

The Judge fought back,

Your opening statement, how horrible it is that Donald Trump is talking about all of these people, you know what’s horrible? When people who shouldn’t be here end up murdering the children of American citizens.”

“What is horrible is when the President of the United States whips up people to beat the hell out of people! Say goodbye! I’m done!”

But Whoopi wasn’t done.  Later in the day Judge Pirro was on the Sean Hannity show and explained:

“When I went off the stage, Sean, I was walking downstairs, and I said something like, ‘Whoopi, I’ve fought for victims all my life,’” Pirro said. “And she said ‘F you’ in my face, literally spitting at me. ‘F you, get the F out of this building!’”

Now Whoopi admits she did toss a few “F” bombs at the Judge, but she claims not to have spit. And, she says she didn’t chase Judge Jeanine out of the building. The former Ms. Johnson says it was the Judge who swore like a sailor.

Goldberg said Pirro was upset before the show even starting taping because conservative commentator Ana Navarro was appearing instead of regular co-host Joy Behar.  After the confrontation, Pirro then “called everybody at the table a name I cannot repeat on TV,” Goldberg said. And said it front of the audience,” she added.

Apparently, Whoopi claims Jeanine called everyone another word for Rooster that starts with a “c” sucker. She says the second battle happen because the Judge confronted her.

In the end, it doesn’t matter who is telling the truth because the way the view host acted during the show was unprofessional Whoopi Goldberg is not an idiot, she knows that Judge Jeanine is a strong supporter of President Trump. I am sure she was briefed on Pirro’s book “Liars, Leakers, and Liberals: The Case Against the Anti-Trump Conspiracy.” The very theme of the book is “Trump derangement syndrome.” If she didn’t want Jeanine Pirro to come on the show, she should have insisted that the producers don’t book her. Instead, she allowed the Fox host to come on the show. She riled up the Judge with her opening statement. The Pirro “fought back” but by trying to convince Whoopi, not screaming and cussing. Whoppi on the other hand, Whoopi who has been on The View for almost two decades and should have known better was totally unprofessional.

As some of you know, I do a weekly radio show and have appeared on the shows of others.  When someone is a guest on the show, they should be treated as a guest in your house. That doesn’t mean they don’t get asked tough, probing questions about the book, show or video they are promoting, but you don’t treat them like an enemy either. Judge Jeanine was a guest on Whoopi’s show, and she was treated like an enemy. Goldberg didn’t even ask her about the book which was the reason for the interview.  Whoopi didn’t treat her guest with respect, and that was wrong.

Which brings me to the stage name.

Whenever Whoopi Goldberg does or says something stupid or unprofessional, I get the urge to point out that her birth name is Caryn Johnson. It’s not the Whoopi part that’s upsetting, it’s the Goldberg. You see Judge Pirro (and anybody else reading this post), I don’t want anyone to think that Whoopi is Jewish. As a lifetime New Yorker, I am sure you know many Jews and have Jewish friends. But it’s important to me that you know that a Jewish person wouldn’t be as rude and unprofessional as , I mean Caryn Johnson was today.

The Jews are supposed to be the “chosen people,” but it’s time for Whoopi to choose someone else for a change. We already have our fair share of famous people embarrassments. Do you realize how hard it is every Father’s Day for Jews to see Woody Allen walk around with his wife/daughter? Who do you think got blamed when Barbara Boxer told General Michael Walsh to stop calling her the military approved Ma’am and start calling her senator. We Jews also have to take the blame for people like Courtney Love, David Axelrod, the obnoxious half of Geraldo River and Diane Feinstein (who was raised  Russian Orthodox). We also get blamed for people like Al Franken, Eric Schneiderman, and  Harvey Weinstein who abuse women just to make people forget that their Mohels took too much of the top at their Bris (ritual circumcision). And please remember we’re stuck with Chuck Schumer who is so mentally disturbed that he wears his glasses like an old schoolmarm at the tip of his nose.

I even made it easy for her, I came up with a list of new last names such as:

Hey, I got an Idea!  Why don’t you change your name to Whoopi Ayatollah Seyyed Ali Khamenei? It fits nicely; they could even call you Supreme Leader like they do with Khamenei in Iran. Heck, you make that name change European leaders and the entire Democratic party will bow down to you and give you anything you want.

Wouldn’t that be cool? Give it a try! Or try one of the other suggestions or anything else! But PLEASE lose the Goldberg. Haven’t the Jews suffered enough?

But won’t budge. So I just want you to know she is not now, nor has she ever been a Jew.

Judge Jeanine spoke about the incident and her book on today’s Ed Morrissey show, It was a great interview which you can watch by clicking here. (The judge comes on at the 38-minute mark)

But before you go, watch the video below. It’s the last three minute of Judge Jeanine’s appearance on The View. Then go watch Ed’s excellent interview.