Due Process? Broaddrick Says Bubba Raped Her, Hillary Told Her Be Quiet 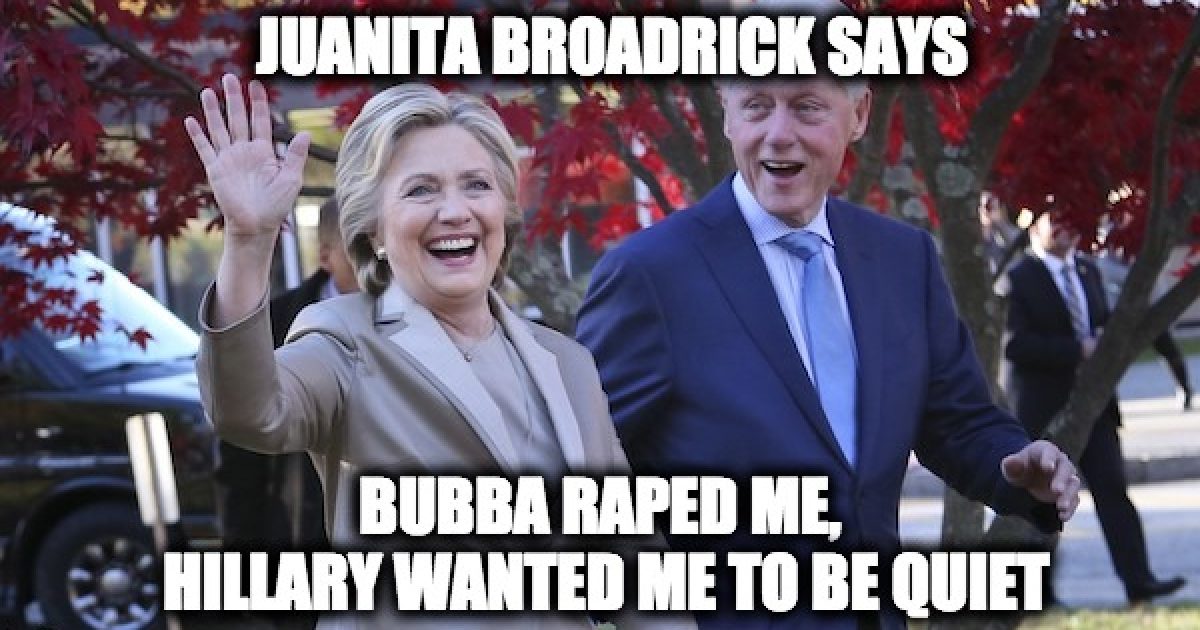 Juanita Broaddrick has been active on Twitter this past week, pointing out her claim that she was raped by former President Bubba Clinton, had proof, but never received the attention Kavanaugh’s accuser has received without evidence. But the real hypocritical part of this isn’t’ that Juanita Broaddrick didn’t receive her due process (she didn’t), but according to her story after she was raped by Bubba Clinton Hillary Clinton tried to shut her up.

When Rachel Maddow asked about due process for Judge Kavanaugh the other day you said:

“Yes, there should be due process for everyone involved. And I think that’s what Dr. Ford is asking for. She is asking for due process. She’s asking that there be an investigation. You know, at the end of the investigation, she might very well decide not to pursue her willingness to testify. She might say, well, you know, there’s no way to ever prove it. Who knows what she might decide,” she said.

If you want the FBI to go back that far @HillaryClinton @MSNBC to investigate Ford’s allegations…. let’s investigate my RAPE allegations against Bill Clinton, too. Seems only fair.

Former president Bubba Clinton has been accused of groping or raping fifteen different women. Many of those women, plus some of the women who had consensual affairs with the former POTUS felt threatened by Hillary Clinton to maintain their silence.

Juanita Broaddrick who says that Bill Clinton raped her in 1978 (yes that’s 40 years ago–only a few years earlier than the supposed Kavanaugh incident). Three weeks after the alleged rape she saw Hillary Clinton who implied to Juanita that she knew what happened and that Broaddrick better keep quiet about it.  When NBC interviewed her about her claims they would not allow her to talk about the Hillary part of it.

In a 1999 Wall Street Journal article Juanita Broaddrick told about the horrible day in 1978 when she accepted the invitation of Bill Clinton, then running for Governor of Arkansas to visit his campaign headquarters next time she was in Little Rock. When she was in the city attending a nurses conference, she called the office to arrange a visit. Clinton wasn’t there but ” an aide who seemed to expect her call, and who directed her to call the attorney general at his apartment. They arranged to meet at the coffee shop of the Camelot Hotel, where the seminar was held” But the future president said it was too noisy and they should have coffee in her room.

That other man was David Broaddrick who at the time of the WSJ interview (Feb.1999) was her husband of 18 years.

Juanita Broaddrick also told her story to NBC News in 1999, (the first of the two videos below). But that video didn’t include the full story.  Then in 2016, Broaddrick told Breitbart News that NBC wouldn’t let her talk about Hillary.

Apparently, an NBC staffer present for the filming rushed in front of the camera, interrupted the pre-recorded session, to declare that allegations against Hillary Clinton could not be included in the interview.

In 2007 Sean Hannity interviewed Broaddrick and allowed her to tell the story NBC wouldn’t let Juanita Broaddrick tell (second video below).  When you read the transcript of the interview which follows, you will never be able to see Ms. Clinton as the defender of women that she claims to be.

Three weeks after the incident, a still shocked Broaddrick was in denial about the incident, even though she had told friends and her future husband what happened. Almost blind from the shock she said she attended a private Clinton fundraiser at the home of a local dentist. The segment of the Hannity interview picks up from there:

Donald Trump may very well be a serial misogynist, but after reading the above and watching the two videos below Do you really believe Hillary Clinton when she calls for “due process?”