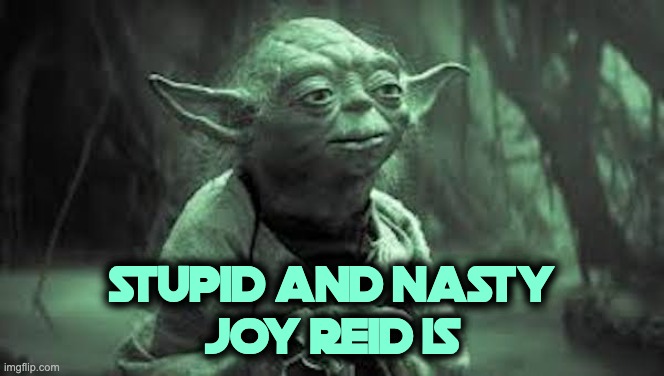 It’s never enough for the left-wing media to be merely wrong. They always seem to go out of their way to be obnoxiously wrong.

Few present a better example of that principle than Joy Reid. Joy is not only obnoxiously wrong, but she is meaner than mean.

Reid has attacked people of Christian faith, claiming there were too many Catholics on the U.S. Supreme Court to rule on the Hobby Lobby case, and she’s compared “Christian beliefs to ‘Something out of a novel. In 2018   posts displaying her hatred of Gay people were discovered. She also photoshopped a picture of Sen. John McCain, suggesting he was responsible for the Virginia Tech massacre and was revealed as a 9/11 “truther.”  Joy Reid is not a fan of Mexican immigrants, has promoted the anti-Semitic canard that Jews and Israel control American foreign policy, spewed the modern version of the anti-Semitic blood libel, and much more. Reid referred to Supreme Court Justice Clarence Thomas as “Uncle Clarence,” And she claimed “people on the right would trade all the tax cuts for the ability to openly say the n-word like in “the good old days.” There is much more on that list of hate. but you get the idea.

Now Ms. “I hate everybody” has done it again.

Hurricane Ian has put Florida in the national spotlight, and Reid sees an opportunity for ‘payback.’

You can tell from what she decides to talk about that she’s still stinging over the fact that DeSantis so badly embarrassed her buddies in the Martha’s Vineyard elite.

Worse still, he single-handedly undid more than 18 months’ worth of the media putting a cone of silence on the Broken Border story. Suddenly, EVERYONE is talking about the sorry state of Biden-era border enforcement.

Not to worry, there’s nothing better than the occasion of a catastrophic natural disaster for an opportunist like Joy to settle old scores.

On the Tuesday edition of The ReidOut, the host remarked that Governor Ron DeSantis (R) would have to pause ‘owning the libs’ in order to manage the natural disaster impacting his state.

DeSantis was governor of Florida throughout the onset of the COVID-19 pandemic and oversaw a successful mitigation effort and reopening of its economy. He also oversaw the response to Hurricane Sally, which struck the Florida panhandle in September 2020.

‘It’s a bit ironic now that you might have Floridians having to pour over the borders and go north and get out of the state of Florida in the exact same crisis we have been talking about on a trolling level in that state for a long time,’ said Reid.

Right. Because a temoporary relocation of people in the immediate path of a hurricane is exactly the same as 5 million people deciding they would rather live in America than whatever country they came from, but rather than apply for citizenship through lawful means they want to pay criminal cartels to sneak them in over the border.

What an absolutely brilliant point. How could we have been so blind as to not see it before now? Oh — maybe because it’s about as stupid a thing as can be lawfully said on television?

If she had a producer worth a damn, he would insist she familiarize herself with the facts of both stories before she goes running her mouth again and looking like a partisan hack with as little empathy as she has intelligence.

But — like so many no-talent hacks who embarrass themselves on auditions for TV singing shows — it doesn’t look like she has anyone in her life willing to be that brutally honest with her.

Confident in her unearned moral superiority, she’ll go ahead and do it all again.

Most of This Post Was First Seen At Clash Daily