Joy Reid: A Combination of Stupid AND Nasty 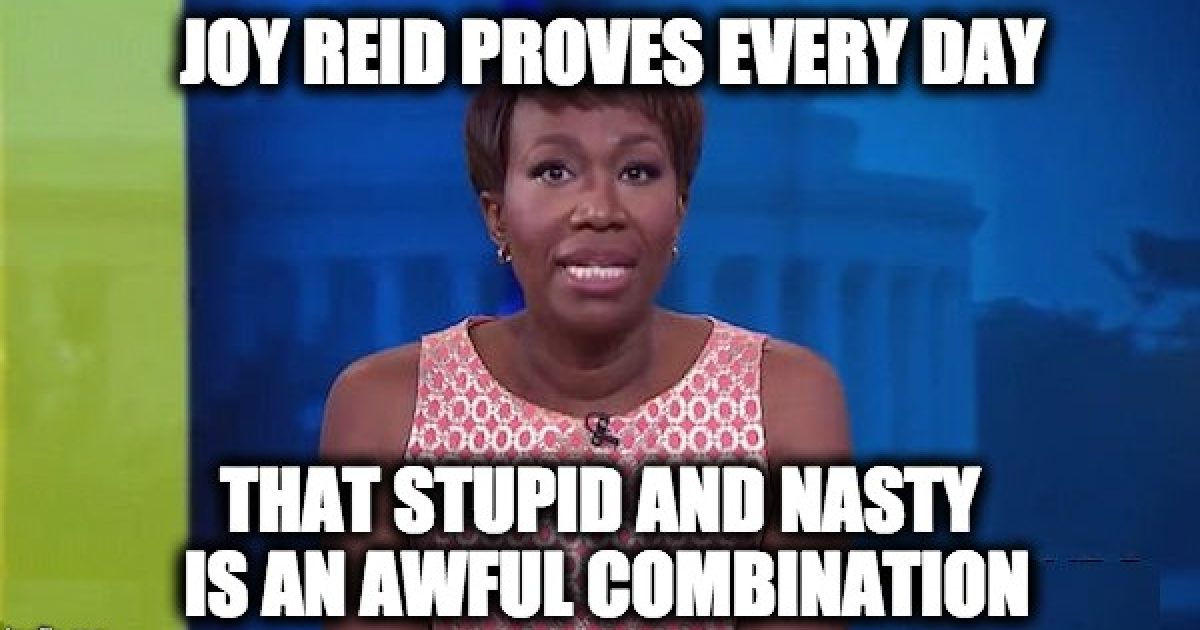 The correlation between bigotry and stupidity has been widely observed. It’s a different kind of ignorance because it’s not a result of being born with a lack of brain power but a “self-imposed” lack of brain power. Bigots are choosing to be haters; thus they are choosing stupidity.  In recent months we’ve learned that MSNBC host Joy Reid is a bigot, but the latest news demonstrates she is nasty also.  And while stupid is terrible and nasty is awful,  the combination of stupid and nasty puts a person beyond repair.

After being caught, not once, not twice, but three different times as having written homophobic, Islamophobic, anti-Semitic, anti-Hispanic vile, and even violent content during her time as a blogger, Reid has finally apologized for the person “she used to be.” One problem with that excuse is that when these issues were first re-discovered, Reid argued that her site had been hacked and someone had planted the offensive posts to smear her. She even called in the FBI, but eventually, she was forced to admit that there was no evidence of a hacking and it was possible that she had indeed written the problematic posts. (You can see the background in various posts, and her lies: here, here, here, and here.).

Another issue she didn’t stop when she joined MSNBC,  where she complained there were too many Catholics on the U.S. Supreme Court, and compared “Christian beliefs to ‘Something out of a novel.’

Through it all her bosses at MSNBC stuck with her, refusing to fire her even as her ratings collapsed. (Can you imagine the firestorm if liberals had found a Fox News host with such politically incorrect rantings on their personal blog, and that host got to keep his/her job? It would be nuts.) In fact, MSNBC went even further and decided to defend Reid as a person who had “grown and evolved.”

“Some of the things written by Joy on her old blog are obviously hateful and hurtful. They are not reflective of the colleague and friend we have known at MSNBC for the past seven years. Joy has apologized publicly and privately and said she has grown and evolved in the many years since, and we know this to be true”

First, she denied that she wrote the posts. Then she argued that she was hacked and somebody planted the posts to make her look bad. Later she apologized for lying about getting hacked and said she doesn’t remember writing the dozens of anti-gay, anti-Muslim, articles (or the vile stuff about Republicans). Finally, after the 5th or 6th, or 7th post was revealed… she apologized for the content and said that “there are things I deeply regret and am embarrassed by, things I would have said differently and issues where my position has changed.”

Her “position” has changed. Some of these posts were political in nature and did have to do with the policy about homosexuals, but some of them were merely Reid expressing her disgust for the gay lifestyle. This was a decade ago, not 30-40 years ago.

However, some of her colleagues from her time at a South Florida radio station (in 2006-2007) aren’t so sure about Reid’s rehabilitation.

Reid was a co-host on “Wake Up South Florida” on radio station WTPS 1080 AM a decade ago, and she left a strong negative impression upon her coworkers.

Andre Eggelletion, former lead host of the morning show with Reid, recently spoke out about her for the first time in more than a decade, saying Reid created “the most toxic work environment I’ve ever experienced” and threatened him with violence.

“It was a very unhealthy work environment because of her attitude. She attacked me on a constant basis while I was there. I was even once threatened with physical violence during a break with her,” he revealed to Fox News.

The incident was corroborated by Lee Michaels, then-national program director for Syndication One, a network of radio stations of Urban One (Radio One back then) that owned WTPS.

“It absolutely happened — 100 percent,” he told Fox News, noting that he had to put in a lot of effort to convince Eggelletion not to quit over Reid’s conduct…

The incident prompted an intervention from the higher-ups at the radio station, who issued a stern warning to Reid to change her behavior or be fired.

“I talked to the general manager and I told him this has to be dealt with in a very firm manner because it was inappropriate and it just can’t be tolerated,” Michaels recalled. He claimed that within the local radio station, there was an attempt to mediate the issue and Reid was supported by some of her colleagues.

Yet, Reid was said to have been stubborn in continuing the confrontation with Eggelletion, once allegedly telling the general manager during a meeting that “Y’all want me to be his friend. I don’t want to be his mother——g friend”…

When asked about Reid (and MSNBC’s) comments explaining that Reid had changed her ways, Eggelletion and Michaels were both dubious about the possibility of her changing so drastically in such a short amount of time.

Eggelletion and Michaels aren’t entirely convinced, though they gave Reid the benefit of the doubt that she may have changed her ways.

“I do believe she’s not telling the truth about who that person [who wrote the blog posts] was. Maybe she has changed, but back then, that was one evil woman,” Eggelletion said.

“She said she doesn’t know who that person is – I find it very hard to believe. Very hard to believe based on my experience with her. Based on her attitudes towards me to this day. I never ever did anything at all to disrespect her, hurt her, I’ve never written or gone public in the last ten years with anything negative about her,” he added.

The former lead host recalled one example in which Reid’s opinion on the radio show echoed her writings. “She did call Charlie Crist ‘Miss Charlie’ on the air,” he said.

Michaels, meanwhile, said Reid “referred to her blog from time to time” during the radio show. “Her demeanor inside the radio station complemented what was on the blog. Mean-spirited, very edgy, negative personality in her writing,” he said.

Whatever happens next, the situation surrounding Joy Reid and her employer MSNBC seems to be more evidence of the double standard that exists within the news media.

Conservatives are held to a higher standard than liberals when it comes to the things they think, say, or do and the truth of this statement is self-evident. Whether the person involved is a Comedy Central “comedian,” a supposed journalist on PBS, or a news and opinion host on MSNBC – it’s simply more likely that a conservative will face life-altering consequences for their “mistakes” than it is that a liberal will be held to account.

Do you think Sean Hannity or Laura Ingraham could survive a similar catastrophe at Fox News?

But then again, neither Hannity or Ingraham is either stupid or nasty.