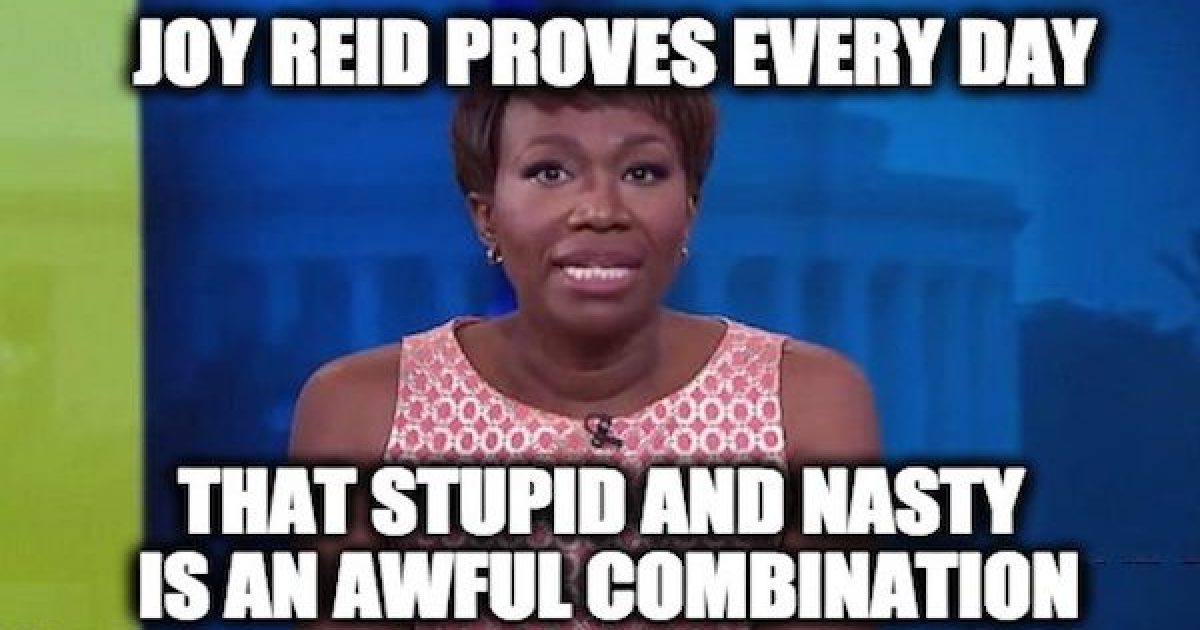 The correlation between bigotry and stupidity has been widely observed. It’s a different kind of ignorance because it’s not a result of being born with a lack of brain power but a “self-imposed” lack of brain power. Bigots are choosing to be haters; thus they are choosing stupidity. In the past year, we’ve learned that MSNBC host Joy Reid is a bigot, but we’ve also learned that she can be nasty.  While stupid is terrible and nasty is awful,  the combination of stupid and nasty puts a person beyond repair. And a recent defamation suit against Ms.Reid proves my point.

A California woman is suing MSNBC talking head Joy Reid claiming that the TV commentator used her social media to slander the Californian of yelling racial slurs at a teenaged boy. The incident occurred at a Roslyn La Liberte City Council meeting in July. Upon seeing a video of the meeting,  Reid jumped to her Twitter account to accuse La Liberte of calling a teenaged boy a racial slur.

The suit claims Reid falsely tweeted that La Liberte showed up “to a rally” and “screamed” that Luevanos is “going to be the first deported,” calling the boy a “dirty Mexican” in the process.

The suit indicates that Reid was not present at the event, which was a City Council meeting, not a political “rally,” and that she ‘made up out of whole cloth the accusation that La Liberte screamed racial slurs.”

The young man in the photo, 14-year-old Joseph Luevanos, told a local Fox affiliate that the conversation was civil and that La Liberte doesn’t deserve to be harassed as a result of the viral photo. The discussion was even captured on video and fails to coincide with Reid’s claim that La Liberte mistreated Luevanos.

“A few days later and despite the fact that the young man previously and publicly denied Reid’s account of events, Reid openly compared La Liberte’s alleged conduct to racism during the Jim Crow era, stating, in part: ‘History sometimes repeats. And it is full of rage,’” the suit claims.

The lawsuit also claims that the MSNBC star “made up” the fact that La Liberte screamed racial slurs at the minor – resulting in an onslaught of hateful and threatening messages aimed at the plaintiff.

“Reid’s accusation that La Liberte screamed racial slurs at the boy in the photograph are false,” the lawsuit states. “Reid set out to destroy La Liberte because she disagrees with La Liberte’s MAGA hat and the beliefs Reid ascribes to those wearing that hat conflict with her ideology.”

Two weeks after her on-camera rant and Joseph’s denial that La Liberte was using racial slurs Joy Reid finally apologized, it was after La Liberte was damaged:

It appears I got this wrong. My apologies to Mrs. La Liberte and Joseph. https://t.co/J8vZsCwAvs

That wasn’t a case of getting it wrong, it was a case of Joy Reid being a bigot and I am sure her apology had more to do with a directive from her network than sincerity. And it wasn’t the first time she has spewed her ignorant racism.

After being caught, not once, not twice, but three different times as having written homophobic, Islamophobic, anti-Semitic, anti-Hispanic vile, and even violent content during her time as a blogger, Reid has finally apologized for the person “she used to be.” One problem with that excuse is that when these issues were first re-discovered, Reid argued that her site had been hacked and someone had planted the offensive posts to smear her. She even called in the FBI, but eventually, she was forced to admit that there was no evidence of a hacking and it was possible that she had indeed written the problematic posts. (You can see the background in various posts, and her lies: here, here, here, and here.).

Another issue she didn’t stop when she joined MSNBC,  where she complained there were too many Catholics on the U.S. Supreme Court, and compared “Christian beliefs to ‘Something out of a novel.’

For those who are legally inclined, below is the lawsuit as filed by  Ms. La Liberte :