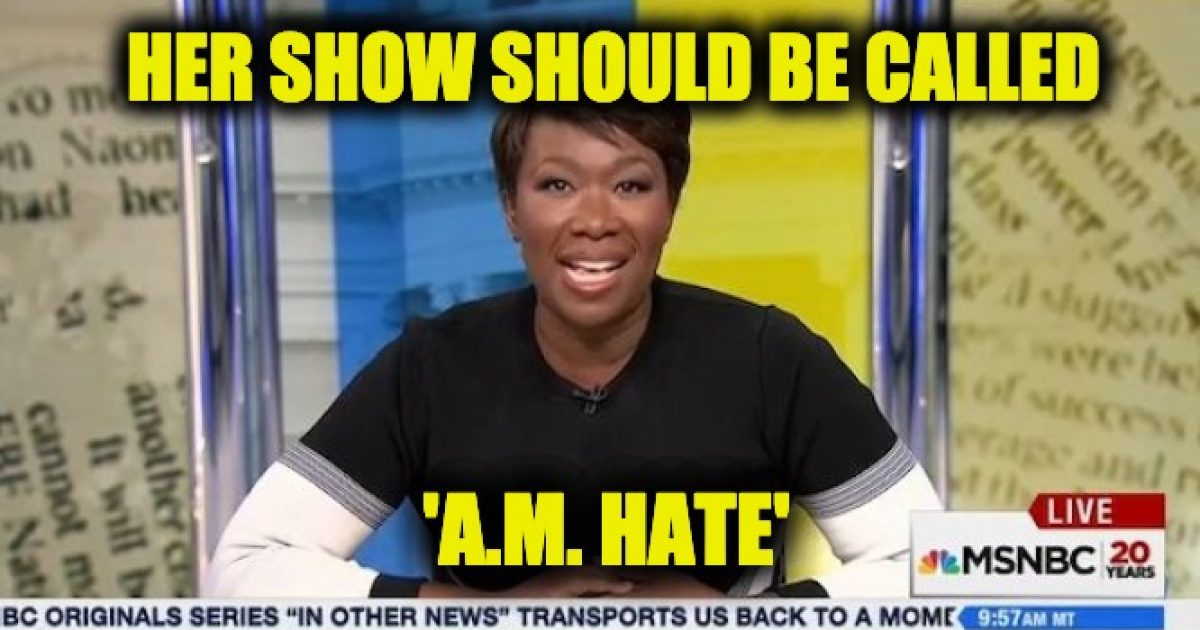 One of MSNBC’s Joy Reid favorite targets is Christians. And she’s attacked them again, saying that “wealthy white Christian” Americans will employ “the apartheid model” of isolating minorities to preserve power.

Speaking as part of a panel called “Civic Participation in an age of Democratic Peril.” on Tuesday,  Reid said:

“My father came — grew up in the Congo, which [like the United States] is also a system of minority rule based on tribe,” Reid said. “My mother came from a system in which the last president in her lifetime served for 24 years. No country is an eternal democracy. Democracy is extremely fragile, and multiracial democracy is so fragile we’re practically the only one that’s pulled it off.”

“My husband’s from England, England has like 6% non-white people,” Reid continued. “This is a very difficult thing to maintain. And when you have a very determined minority, in this case wealthy white men and wealthy white Christian men and Christian Americans who are of the fundamentals variety, who are very clear that no matter what happens if they have to pull the South Africa model to maintain power forever they will do it, and they’re not afraid of it and they’re increasingly open about it and Donald Trump is merely the avatar for this, he didn’t create it, he simply benefited from it.”

The panel was part of an all-day event called “In Defense of American Democracy” organized by the Albert Shanker Institute, the American Federation of Teachers, and Hillary Clinton’s group Onward Together.

This isn’t the first time Reid has attacked people of Christian faith she complained there were too many Catholics on the U.S. Supreme Court to rule on the Hobby Lobby case, and she’s compared “Christian beliefs to ‘Something out of a novel.

Reid is a bigot. In 2018   posts displaying her hatred of Gay people were discovered. She also photoshopped a picture of Sen. John McCain suggesting he was responsible for the Virginia Tech massacre and was revealed as a 9/11 “truther.”  ]Joy Reid is not a fan of Mexican immigrants, believes the anti-Semitic canard that Jews and Israel control American foreign policy, spewed the modern version of the anti-Semitic blood libel and much more. Because it is essential for the present discussions about Ms. Reid, her bigoted blog posts are presented and expanded upon below, and similar comments made on her MSNBC program are included.

Did you know that the Mexicans who come to the United States don’t really care about freedom? That’s what Ms. Reid believes.

I’ve said on the radio show, and on this blog, that in my opinion, the immigration debate mostly misses a very important point: many, if not most, of the illegal migrants who come to this country overland from Mexico are not coming here for citizenship, or freedom, or some other Statue of Libertyesque truism: they’re coming here for cash, that they intend to send home to Mexico (to the tune of becoming that country’s second-largest component of GDP.)

The correlation between bigotry and stupidity has been widely observed. It’s a different kind of ignorance because it’s not a result of being born with a lack of brainpower but a “self-imposed” lack of brainpower. Bigots are choosing to be haters; thus, they are choosing stupidity. MSNBC host Joy Reid is a bigot, but we’ve also learned that she can be nasty.  While stupid is terrible and nasty is awful,  the combination of stupid and nasty puts a person beyond repair.

Another Doctor Comes Forward: For All The Information That Is Out On This Fraudulent Plandemic One Has To Ask, Why No One Has Been Charged? (Video)
March 3rd, 2021 Sons of Liberty Media

WATCH: Medical Expert On CNN Says That We Should Wear Masks And Adhere To Social Distancing EVERY Winter
March 3rd, 2021 Clash Daily