Does Joy Behar Understand Gravity? How About Ballistics? 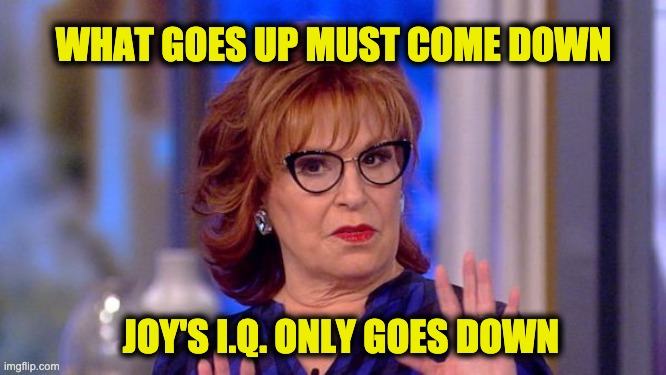 In a discussion about the fatal shooting of a knife-wielding Ma’Khia Bryant in Columbus, Ohio, “The View” co-host Joy Behar seemed intent on cementing her credentials as a non-expert when it comes to firearms and the use of lethal force. joy behar gravity

Behar, according to Fox News, “suggested the officer could have just shot his gun in the air instead of aiming it at the 16-year-old.” She obviously never heard the Blood Sweat & Tears Song “Spinning Wheels” that began with the very accurate lyrics “What Goes Up, Must Come Down.”

As noted by the website Science.howstuffworks.com, “If you fire a gun into the air, the bullet will travel up to a mile high (depending on the angle of the shot and the power of the gun). Once it reaches its apogee, the bullet will fall. Air resistance limits its speed, but bullets are designed to be fairly aerodynamic, so the speed is still quite lethal if the bullet happens to hit someone. In rural areas, the chance of hitting someone may be remote because the number of people is low. In a crowded city like Columbus however, the probability rises dramatically, and people get killed quite often by stray bullets.”

In the aftermath of her remarks, Behar seems just slightly less-informed than Joe Biden. Back in 2013, when he was vice president, Biden sat down for an interview during which he counseled a young woman interested in buying an AR-15 for home protection to instead “buy a shotgun.”

In the event of trouble, Biden said, take the shotgun outside and fire a couple of shots into the air to scare off an intruder. Very bad idea, as explained at the time by US News.

Biden’s problem, and now Behar’s, is that in most jurisdictions, firing guns into the air is illegal. Where police are involved, they’re typically forbidden to fire a gun into the air, for reasons explained above.

Underscoring that point, back in 2013 not long after Biden’s foolhardy comment streaked across cyberspace, a Vancouver, Washington man named Jeffrey C. Barton actually fired a shot in the air to frighten a car prowler. Barton was prosecuted, he tried to use the “Biden defense” and he lost in court.

In its report, Fox News noted, “Behar’s suggestion comes a day after an unidentified reporter was slammed for asking Interim Columbus Police Chief Michael Woods if the Columbus officer could have shot Bryant in the arm or leg instead of aiming for center mass. “Can an officer shoot the leg, can they shoot somewhere that would not result in a fatal wound?” the reporter asked, according to Fox.

Woods explained officers are not trained to shoot the leg because it’s too small a target.

That too can result in an innocent bystander being hit by a bullet.

The Ohio teen, identified as Ma’Khia Bryant, was shot as she raised a knife over her head in what appears to be clear preparation to stab another teen. The case is under investigation. But the video does seem to show that the officer was justified (and that Joy Behar is a moron).