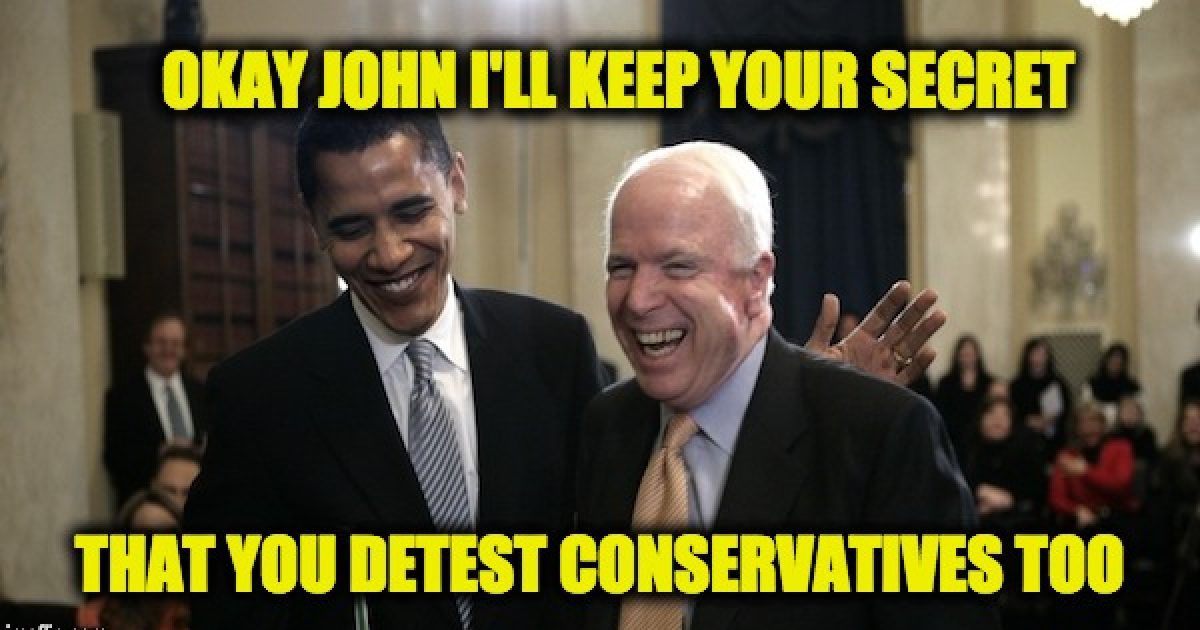 Judicial Watch released some documents revealing that a John McCain staffer urged Lois Lerner to audit non-exempt organizations until they financially collapsed. What he didn’t know was Lerner was already attacking the 501(C)(3), groups. By April 30th, 2013, Sen. John McCain’s staff director Henry Kerner, had moved on to be the chief counsel on the McCain-chaired Senate Homeland Security Permanent Subcommittee,

On that last day of April he urged a group of senior IRS officials, including the infamous director of exempt organizations Lois Lerner that if she thinks the groups were being political to “audit so many that it becomes financially ruinous.”

The explosive exchange was contained in notes taken by IRS employees at an April 30, 2013, meeting between Kerner, Lerner, and other high-ranking IRS officials. Just ten days following the meeting, former IRS director of exempt organizations Lois Lerner admitted that the IRS had a policy of improperly and deliberately delaying applications for tax-exempt status from conservative non-profit groups.

Lerner and other IRS officials met with select top staffers from the Senate Governmental Affairs Committee in a “marathon” meeting to discuss concerns raised by both Sen. Carl Levin (D-MI) and Sen. John McCain (R-AZ) that the IRS was not reining in political advocacy groups in response to the Supreme Court’s Citizens United decision.  Senator McCain had been the chief sponsor of the McCain-Feingold Act and called the Citizens United decision, which overturned portions of the Act, one of the “worst decisions I have ever seen.”

Well, that and the fact that Senator McCain hates conservatives and Tea Party groups as much as Lerner and her bosses in the Obama White House.

It was ten days after that meeting, when she was answering a “planted” question during an American Bar Association speech, Lerner admitted to what most conservatives had suspected for years, the Obama IRS was practicing viewpoint discrimination against 501(C)(3) Tea Party organizations.

The Internal Revenue Service on Friday apologized for targeting groups with “tea party” or “patriot” in their names, confirming long-standing accusations by some conservatives that their applications for tax-exempt status were being improperly delayed and scrutinized.

Rather, Lerner said, they were a misguided effort to come up with an efficient means of dealing with a flood of applications from organizations seeking ­tax-exempt status between 2010 and 2012.

Of course, we now know that there had been a decrease in such applications in 2010. And we soon discovered that Lerner didn’t make her admission out of guilt but because four days later the treasury department inspector general released his report about IRS targeting. The report said in part

“Early in Calendar Year 2010, the IRS began using inappropriate criteria to identify organizations applying for tax-exempt status” (e.g., lists of past and future donors). The illegal IRS reviews continued “for more than 18 months” and “delayed processing of targeted groups’ applications” in advance of the 2012 presidential election.

Judicial Watch previously issued the documents but the IRS had redacted the notes of the meeting, but they found the non-redacted version in another IRS document dump. But even the redacted version made people suspicion of McCain and his office. ”  Senator McCain then issued a statement decrying “false reports claiming that his office was somehow involved in IRS targeting of conservative groups.”

“A recent press release by Judicial Watch sparked a series of online reports falsely claiming that my office was somehow involved in the IRS’s targeting of conservative groups – reports that are demonstrably untrue and totally contradicted by my all of my actions over the past several years on this issue.

“These reports ignore the fact that I released a 37-page dissenting report last September refuting the Democrats’ Majority Permanent Subcommittee on Investigations (PSI) report claiming the IRS showed no bias against conservative groups. Media coverage at the time noted that I was in total disagreement with Senate Democrats on the issue of whether the IRS targeted conservative groups (see The Associated Press article below headlined “Competing views on IRS treatment of tea party”

McCain is probably telling the truth since this meeting occurred three years after the IRS began its program of viewpoint discrimination, besides, McCain hates conservatives so much if he targeted them it would probably be with an uzi.

Below is the full set of unredacted notes from the April 30th meeting.