John McCain Is Losing Touch With Voters And Reality 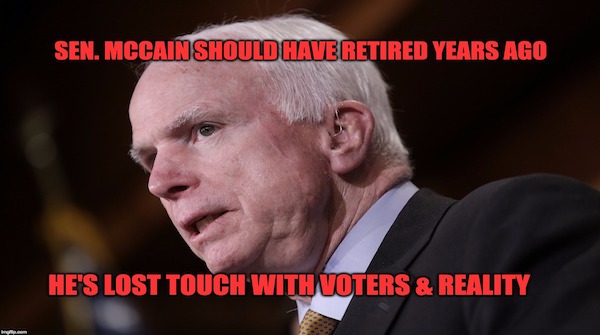 Another day, another bizarre and unfounded accusation against a republican regarding their non-existent ties to Russia.

Even after an exhausting volley of Russia-induced hysteria swept through the democratic party in the wake of the 2016 election, some politicians just can’t seem to get enough of slinging completely fabricated and accusatory conspiracy theories around.  The latest to do just that is John McCain, an avid anti-Trump Republican and overall thorn in the side of governmental progress.  The latest victim of his increasingly senile tirades is none other than Rand Paul, and McCain’s theory is that Paul is Vladimir Putin’s puppet (video at the end of this post).

“McCain tried to call up the treaty and warned that anyone blocking it would be helping Russia maintain its influence over the small country across the Adriatic Sea from Italy, reports the Examiner.

“When McCain attempted to ask for consent to call up a resolution that would have the U.S. ratify the treaty if approved, Paul was quick to object.”

All of this talk of Russian meddling in U.S. affairs is bona fide B.S. in the most extreme sense, and John McCain’s bizarre and unwieldy accusations against Rand Paul is a telltale sign of the Arizona senator’s dwindling influence in Washington.  Once a contender for President, McCain has repeatedly handicapped himself with asinine threats and empty allegories that lead many to believe that his time in government should have ended years ago.

Andrew West is right, John McCain should have retired a long time ago. In fact the senator from Arizona is beginning to remind me of Willie Mays. I am not however suggesting that McCain is to politics what Willie Mays was to baseball.

Like many great athletes, the man known as “The Say Hey Kid,” and IMHO the greatest player ever to put on a glove, Willie Mays hung on too long.

On offense Mays had no equal, he could hit for average, and power and was always a threat to steal a base.  And if Willie Mays didn’t spend two years serving his country in the Korean War, missing 266 games, Mays may have beaten Hank Aaron’s all time HR record (without steroids) of 755.  Mays ended up with 660.In his prime playing center field, Mays was like a vacuum cleaner, catching anything hit to the outfield with his unique basket style. But he didn’t just catch the ball, Willie Mays didn’t have a throwing arm, he had a canon. In the 1954 World Series Mays made what many consider the greatest world series catch ever made. Center field in the  Polo Grounds was larger than average , and Mays, who played a shallow center field, ran full speed and made an on-the-run, over-the-shoulder catch 440 feet out on the warning track to make the out. But that’s not even the Amazing part, even though he was running full speed the other way, Mays stopped on a dime, spun around and threw perfect strike to home plate. 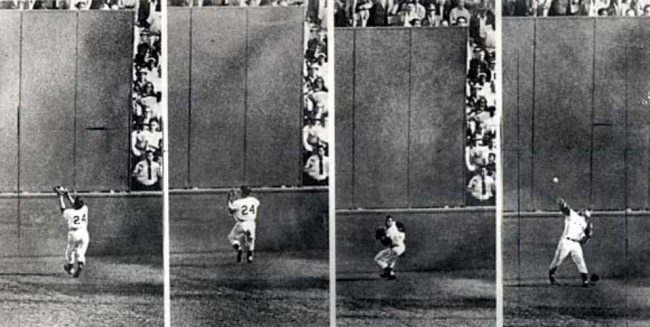 But in the middle of the 1972  season Mays was traded to the NY Mets, and despite the fact that he was 3-4 years past his prime Mays decided to return in 1973. In 1973-the best all-round baseball player ever to play the game (and he still is) was pathetic, floundering on the diamond looking mediocre at best, his bat was too slow to hit at a major league level, and he was a liability on the base paths. The Mets made the World Series in 1973, and as the baseball world saw what seemed to be an imposter, in the same game Mays badly mis-played two fly balls, on one of them he tripped and fell while trying to make a catch. Sure it happens but not to Mays.

Like Mays, John McCain has stayed on much to long. Always known to have a temper, McCain has become divisive, attacking his fellow Republicans more than the opposition party. He especially hates anyone associated with the Tea Party, like Rand Paul and Ted Cruz for example. He’s even been oppositional just for the heck of it toward Donald Trump, the first Republican elected president since Bush #43’s election in 2004.  None of it is personal–all of it is about the fact he has no idea what the voters really want.

Unlike many of my fellow conservatives, John McCain is a hero who served this country in Vietnam and then in the congress. But his hero days are long gone. He’s lost touch with voters and reality. John McCain is no longer a maverick he is simply an angry man who should have retired after he lost to Obama in 2008, and it is a sad thing for this country.

The top portion of this post originally appeared in Constitution.com