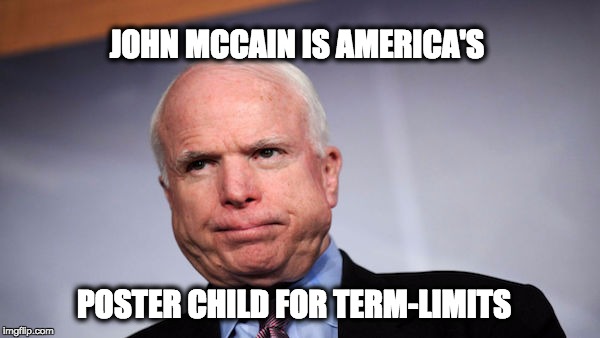 Two lawsuits have raised the possibility that Senator John McCain (R-AZ) a man who probably never heard of former President Ronald Reagan’s “11th commandment” was involved with leaking the “Trump Dossier,” to the mainstream media. The dossier was the fraudulent 35-page document leaked to CNN and published in full by BuzzFeed a few weeks before the Inauguration. Eventually proven bogus, but when leaked the document was said to have “revealed” ties between Team Trump and Russia, as well as some unsavory activity between the future president and Russian prostitutes.  Of course Anyone who has researched President Trump knows that he is a bit of a germaphobe, just based on that alone, one will realized that Trump would never do some of the unsavory activity with described in the dossier, especially with strangers.

On the other hand the Republican Senator from Arizona has an uneven political reputation within his own party. Known on the right for being too liberal, too wishy-washy on key subjects and critical of any Republican whose political views are more conservative than Bernie Sanders. McCain is loved by his constituents but often despised by conservatives.  There are also some believe that McCain’s defiance is a purely selfish mode of behavior. Either way, the Senator has a certain panache for annoying conservatives and even GOP moderates.

During the transition the GOP began to unite behind the new President, but McCain steadfastly stood to the side, lobbing insults and accusations toward the Oval Office in an act of petty tantrum.  Some of the principals involved in  that bogus Russian dossier are suing for defamation, and McCain is being mentioned in the suit, not necessarily for leaks, but it does seem as though the failed 2008 presidential candidate may have been intimately involved in the scheme to smear the The Donald.

“The dossier compiled by former British spy Christopher Steele and his London firm, Orbis Business Intelligence Ltd., amounted to a collection of uncorroborated reports of collusion gathered as political research for sale to Trump’s opponents. It proved explosive when published by online news site BuzzFeed on Jan. 10.

The 35-page dossier of damaging and embarrassing allegations directed at Donald Trump was compiled by Steele a former British spy last year. This former MI6 agent had been hired initially by anti-Trump Republicans to investigate Trump for opposition research purposes. He was later employed by Democrat entities.

According to the lawsuit two of the people who had a copy of the dossier before it was published in the media were John McCain and David Kramer who worked for the State Department from 2008-9. Additionally Sir Andrew Wood, a former British ambassador to Moscow and a Russia adviser to former Prime Minister Tony Blair, said before publication he discussed the 35-page dossier with McCain.

Already known (and admitted by McCain) is the fact that the intelligence community first learned of the document after Senator John McCain  turned it over to the FBI:

One would think that the Republican Senator from Arizona and former GOP presidential candidate would extend the courtesy to Trump to let him know about the documents that supposedly were about to be used by the Russians to blackmail the next president. But not McCain

“Now, two lawsuits — one in the United States and a second in the U.K. — are being brought by lawyers for Aleksej Gubarev, a Cyprus-based Internet entrepreneur whom Steele’s Russian sources accused of cyber spying against the Democratic Party leadership.

“According to a new court document in the British lawsuit, counsel for defendants Steele and Orbis repeatedly point to McCain, R-Ariz., a vocal Trump critic, and a former State Department official as two in a handful of people known to have had copies of the full document before it circulated among journalists and was published by BuzzFeed [something McCain admitted].

“The court document obtained by McClatchy confirms that Sir Andrew Wood, a former British ambassador to Moscow and a Russia adviser to former Prime Minister Tony Blair, discussed the 35-page dossier with McCain.”

The dossier has been largely chastised as being a crude attempt to defame the Commander-in-Chief and nothing more. Of course that didn’t stop the FBI from using the bogus dossier as part of the evidence to convince a FISA Judge to issue a warrant allowing them to spy on Team Trump, at least according to Business Insider.
McCain isn’t accused of helping to create the dossier, he is being questioned about possibly leaking the dossier to the press, if that turns out to be true it is another example of the cynicism of the Arizona Senator, who should be the poster child for term limits.
One of the reasons John McCain lost the 2008 election is he his campaign attack Obama about Jeremiah Wright, Bill Ayers and his other nefarious connections.  McCain’s hypocrisy becomes evident when one realizes that when it comes Republicans, and a President of his own party, the Senator is not as nice. Shame on him!!
Facebook Twitter Flipboard