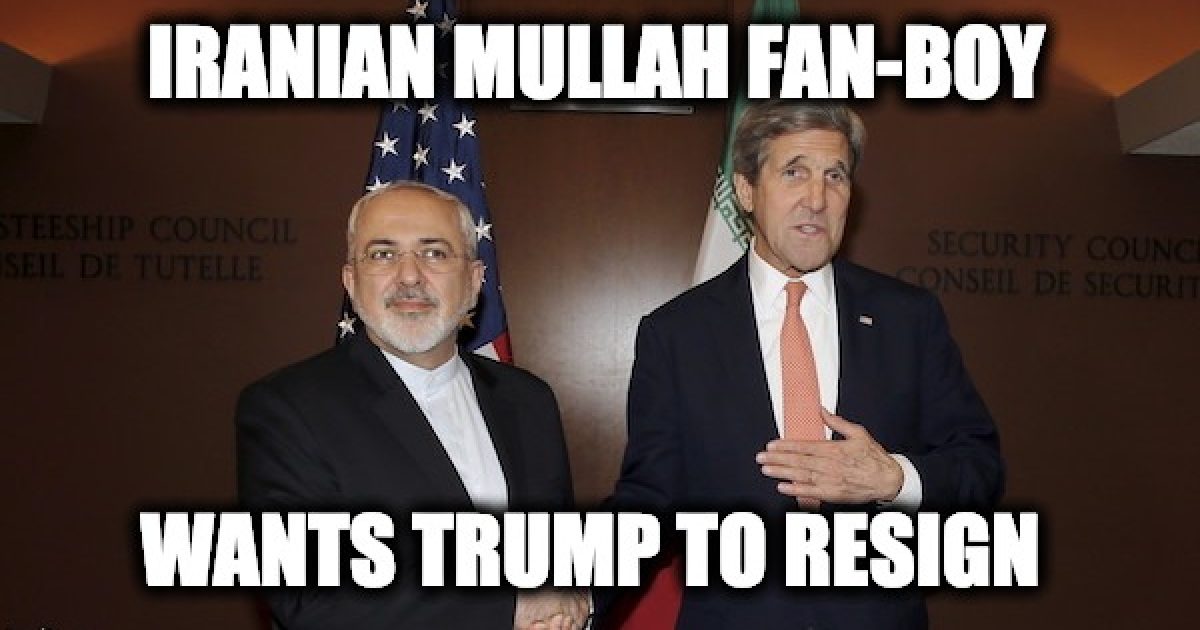 Asked what message he has for President Donald Trump, John Kerry told attendees of CNBC’s World Economic Forum panel that the president doesn’t take his position “seriously” and should “resign.”

That’s right, the man who during his tenure as secretary of state sucked up to the Iranian Mullahs and did his best to make this great country seem weak is calling for President Trump to resign.

What would John Kerry say to Trump if they were sitting across from each other? "Resign." https://t.co/jKtRgh4Vm8 pic.twitter.com/NXbMzQ5gfx

As reported on CNBC

John Kerry had a one-word answer when asked his message for President Donald Trump: “Resign.”

The former secretary of State and Democratic U.S. senator from Massachusetts made the declaration while speaking on a CNBC panel at the World Economic Forum in Davos, Switzerland. Kerry, who lost in his bid to become president in 2004, first hesitated to answer the question, lamenting that Trump “doesn’t take any of this seriously” before calling for his resignation.

A White House spokesman did not immediately respond to CNBC’s request for comment on Kerry’s remark.

Trump, along with a delegation of government officials, was scheduled to travel to Davos but canceled due to the ongoing partial shutdown of the government. The shutdown has entered its second month with no resolution in sight, as 800,000 furloughed federal workers are set to miss a second paycheck this week.

A passionate debate @cnbci on the future of our Oceans #OceanDavos #climatechange with @UN Peter Thomson and @WWF Rebecca Shaw with @JohnKerry telling me he thinks @POTUS should resign #wef19 pic.twitter.com/XgHagiCoYQ

What is John Kerry even doing in Davos anyway? The only thing he’s done since he left office is violating the Logan Act.

Last January Israeli Newspaper Ma’ariv reported John Kerry sent a message to Palestinian Authority Pres, Abbas, “that he should stay strong in his spirit and play for time, that he will not break and will not yield to President Trump’s demands,” because Trump will be out of office within the year.

Ma’ariv has learned that former US Secretary of State John Kerry met in London a close associate of Abbas, Hussein Agha , for a long and open conversation that contained many headlines. Agha apparently reported details of senior PA officials in Ramallah. A senior Palestinian official confirmed to Ma’ariv this week that there had indeed been such a meeting.

Wrong again Kerry he’s still living at 1600 Pennsylvania Avenue, and you still care about your self more than your country.

In May of 2018 when President Trump was trying to get the U.S out of the horrible Iran deal, like a sneak John Kerry worked behind the scenes to save the fraudulent Iran nuclear deal the Obama administration sold to the American people with lies and cover-ups.  According to the Boston Globe in mid-April, he went to the UN for a meeting with Iranian Foreign Minister Javad Zarif to discuss ways to save the deal Iran. “It was the second time in about two months that the two had met to strategize over salvaging a deal they spent years negotiating during the Obama administration, according to a person briefed on the meetings.”

As Secretary of State he capitulated to the will of the Iranian Mullahs and now as a private citizen, he is still operating in the interests of foreign governments and against the American people. HIs trip to Davos is the third time that we know of that he has tried to destroy the policies of the United States government. I am not an attorney, but it sure seems like a violation of the Logan Act to me.