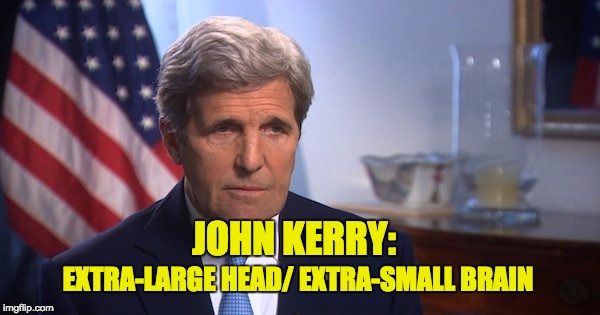 If one needs any proof of the ineptness of the Obama/Kerry foreign policy, Kerry’s interview with liberal sycophant Andrea Mitchell will remove any remaining doubt. Secretary of State John Kerry told Mitchell on MSNBC that if it wasn’t for Russia (and even worse, Iran), Syria would have already fallen to Muslim extremists!

Kerry made this observation just a few hours after President Obama criticized the Russians and Iranians for the massacres in Aleppo, Syria.

Mitchell began the interview by trying to get Kerry to beat up on president-elect Trump, but Kerry wouldn’t bite. He did indicate though, that he would be attacking Trump after he takes office.

As she traditionally does with any Democrat, Mitchell teed up a softball for Kerry so he could beat up on Russia and Vladimir Putin with the intention of de-legitimizing the incoming administration, but instead Kerry perfectly explained why we should have done our best to work with Russia and Syria on the problems there, instead of siding with the Muslim rebels most of whom were also tied to Al Qaeda or ISIS (video at the bottom of this post):

Andrea Mitchell: Five years. So many people dead. Displaced millions. The suffering. Russia, the game-changer, a year and some months ago entering with no warning, 24 hours after meeting personally with President Obama, Putin’s planes are flying over Syria for the first time. No warning at all to us. The Russian role has been so devastating in propping up Assad at a critical juncture. Any regrets? You expressed some that were in an overheard audio to some of the opposition leaders. Any regrets that we didn’t arm the rebels sooner, when there might have been a better opportunity?

John Kerry: Well again, Andrea, I’m going to have a lot of opportunities to be able to look back and digest what choices might have been made. I’m not going to do it now… Except to say to you, very clearly, that I’m proud of all the efforts we made to try to lead people to a peaceful resolution. And in fact, the only solution to Syria will be a peaceful agreement along the lines of what we laid out… and the several communiques that we issued, and the United Nations resolution that we passed. 2254. Those will be the basis for whatever happens, if they get there.

I believe there is an exhaustion setting in, sometimes timing is everything in these kinds of negotiations. And I believe that there is a possibility over the course of the next year that the parties could come forward. It would be on a different plane of leverage, a different kind of outcome than some people might have anticipated. But there may be possibilities of trying to move forward…

There is no military solution to the problem of Syria. When President Putin came in, he came in partly to prop up Assad, but also because ISIL/Da’esh was gaining huge ground. The radical extremists were gaining huge ground against Assad, and Assad was in a very fragile position. And so together, Iran and Russia had to prop him up, and save him from the possibilities that the extremists might take over the country.

Of course, if asked in 1941 Kerry would have said that there was no military solution to WWII.

And I will say, that was not something that we weren’t also concerned about — that there was a gaining foothold of al-Nusra, and Da’esh, in their ability to push towards Damascus. And the regime was on its heels. Did Putin make an enormous difference in that? Yes, along with Iran and Hezbollah and the entities that basically overwhelmed some of the forces available to the opposition. But that doesn’t end the war. Nothing that he has done is in fact going to obviate the need to get to Geneva to have… a real negotiation that resolves the political differences [in Syria]…

That’s a hard road to get to, no matter what Putin has done.

We all know that Vladimir Putin and Bashar al Assad are both evil despots who have sorely mistreated their people, and both men deserve to be overthrown and discarded in the waste-bin of history. BUT, neither man is “more” evil than the villains who support Muslim “extremism.” Assad may be bad, but ISIS is worse. Our efforts against Assad helped the rise of ISIS in Syria; as we started to get involved in Syria we should have found a way to work with Putin to minimize the death and destruction and avoid the rise of ISIS in Syria altogether.

The Syrian problem perfectly encapsulates the constant string of foreign policy failures perpetrated on our planet by the Obama administration. Feckless and quick to capitulate, Obama and other invertebrates like John Kerry who run his foreign policy have few if any achievements to brag about.

Along with a P5+1 deal which opened the door for Iran to build atomic weapons, their constant attempts to de-legitimize our only real ally in the dangerous Middle-East Israel, and this administration’s clumsy involvement in Syria;  first to unsuccessfully prevent Syria from using chemical weapons, then to stop the mass killing of Syrians by Assad and his allies Russia and Iran, Obama and his two secretary of states (Clinton and Kerry) has a created a United States which is no longer feared by the evil in the world and no longer trusted by our allies.

This is a foreign policy that Donald Trump must (and will) change.

Note: Much of this post was originally published at Constitution.com