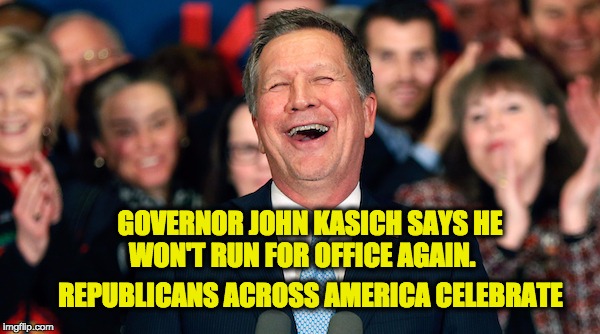 John Kasich lost all my respect during the 2016 primary season. It wasn’t that he ran and held on long after he had no chance of winning, it was the GOP Convention held in Cleveland.  As the governor of Ohio, Kasich was supposed to be a host of the convention. But instead he played the sore loser who wasn’t interested in party unity, Ohio Governor John Kasich boycotted his own convention.

On Sunday John Kasich said  he has no intention of running for office again.

Asked by CNN’s Dana Bash on “State of the Union” if was going to challenge President Donald Trump in 2020,
Kasich responded:

Dana look I went to Munich to talk about the importance of NATO at the invitation of John McCain right I waded into the health care debate because I didn’t want to see coverage ripped out of all these people’s hands okay my job, believe me my job is to be a voice that’s constructive I’m not really interested in running for political office again I’m interested in being a voice that can help bring the country together again and I don’t be self-righteous or any of this stuff oh you’re not here to go up again you’re not going to run for president I don’t,  I don’t,  I don’t   I don’t see it, I just don’t see it ever I don’t see it Dan I mean what look I got other things I have to do I don’t see it you know you don’t close the door on anything but I am I don’t have my eyes on that and the reason i have an organization there is so that I can maintain a voice not just as governor but when I’m not governor I don’t intend to go away I hate to tell you for those that want me to go away I’m not going away.

Apparently the two-term Republican governor has continued to do national interviews, has maintained a political organization and has been working on a book — all moves suggesting interest in a future run. Kasich, however, emphatically denied this was the case.

Kasich was re-elected by an overwhelming margin to his second term as governor in 2014, but he failed to gain enough traction to defeat Trump in any primaries except in his home state or force a contested vote at the Republican National Convention in July.

Part of the reason he couldn’t attract voters was his clumsiness on the campaign trail. For example, John Kasich’s first venture into pizza politics was a failure. Partaking a slice of the sumptuous delicacy at Gino’s Pizzeria in Queens, the governor of Ohio committed pizza blasphemy. He used a fork to eat his first bite of pizza. The governor tried to spin his way out of it by eating the rest of his pizza the way God intended, folding it in half and eating with his hands. Appearing on ABC’s Good Morning America the next day the candidate whined, “Look, Robin, look, look, the pizza came scalding hot, OK?”  Well I am sorry Governor Kasich but that is no excuse, as hot as it might have been you still put it in your mouth after butchering it with a fork.  Voters realized that if he can’t tame a hot slice of pizza, he wont be able to tame ISIS. 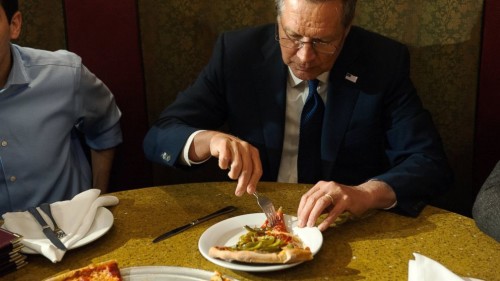 Kasich (and Gingrich and Clinton) say the balanced the budget because they including  the public debt but not the intra-governmental debt.    Its like paying off your American Express card while ignoring the fact that your MasterCard over the limit and months past due. Your Amex looks great but your budget is not balanced.

When the Treasury department reports the National Debt it counts both public and intra-governmental debt. Clinton’s first full budget proposal in 1993 took effect in October 1993 and concluded September 1994 (FY1994) and his last started in October 2000 and ended in September 2001. Using those bookends and subtracting each year’s national debt from prior years,  here’s the national debt at the end of each year of Clinton Budgets.

To be fair, Clinton’s FY 2000 budget came very close, it only added about $18 billion to the national debt, but in his last budget he was back up over $130 billion.

In conclusion the guy can’t eat pizza, and is either lying about balancing the deficit or he can’t add. Put it together with the fact he is an awful host…it is good for America that he isn’t running anymore.

Hey John, when your term as governor is over and you are officially out of politics, I would like to invite you over to my house for a barbecue. No one in my family (including me) will be there, but you will understand John that’s how you like to host conventions.

A video of the Kasich declaration follows