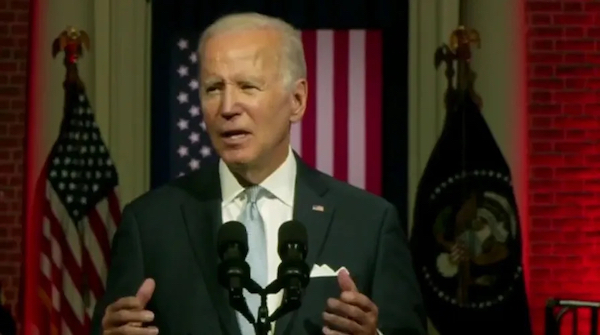 Joe Biden stood in front of Independence Hall, with blood-red walls as a backdrop and Marines standing in as props while he gave a blistering rebuke of all the things and people in America he hates.

This is picking up on the theme that has been building to a crescendo since those Primetime made-for-cable J6 soviet show-trial hearings featuring Liz Cheney and that guy who cries as the dutiful turncoats putting a patina of bipartisanship on the whole farce./

Truth be told, it goes back far earlier than that. Joe announced his presidential run with a Big Lie, citing Charlottesville as the reason it was vital Joe throw his hat in the ring… as if he wasn’t desperate to get back in the office before China decided to cut off the Biden family’s VERY lucrative side hustles.

But while Joe was up there, in front of Independence Hall, looking at the picture of those wild-eyed vein-bulging psychos he referenced in the video launching his campaign, we all saw him for what he was.

If he hoped to appear as a grand statesman, towering over his lawful domain, protecting it from the wicked designs of a handful of wretches, he did no such thing.

Mr. Malarkey stood in front of a national audience and did precisely the opposite of what he announced he would do on his first day in office. He pledged to be an uniter — that was the entire point of his ‘Soul Of America’ rhetoric.

If he believed he had the heart of the nation and a record worth pointing too, he’d stand in front of the audience with confidence, a smile, and an ability to laugh.

The jaundiced man we saw on stage last night was framed perfectly by the bad lighting of blood-red walls that reminded many of the Hitlerian iconographies.

This message was not based on the hope of the future he would offer but on fear of the ‘other.’

Reason 2: Who and what did we see him talk about?

If you were to take his lapdog media at their word, Joe Biden should be riding high. To hear Biden’s bootlicker on social media tell it, Joe Biden has been running the table for a couple of months.

If Joe Biden really had that string of wins this close to the election, he would have led with them. So, where are they in this speech?

Nowhere. Because he has no wins, he can point to them. Not the kind that will convince the public in time for November. Instead, he’s talking about those big evil Republicans and the leader whose name he can finally pronounce in public again.

Reason 3: His popularity levels when he was out of the public eye

Joe Biden was the first POTUS to run a campaign from his basement. Why? Because he’s not a compelling candidate.

His poll and approval numbers were cratering, and then they bounced back a little. When did they bounce back? When Joe was away on vacation or COVID isolation, the country was caught up in talking about other things.

We were talking about … Trump and J6.

But now he’s back, and we’re talking about him and his policies again. Just like that, his numbers dropped back down below 40%.

Reason 4: What is he making us look AWAY from?

We’re seeing examples of the Government using its power to crush whatever they decide to deem ‘disinformation’ and the First Amendment rights of anyone who doesn’t toe the party line. They are illegally doing this by using their Silicon Valley buddies as their enforcement goons — just like we are already seeing with Twitter in this election cycle.

Second-hand violation of First Amendment rights is almost as unconstitutional as direct violations.

He took his vacation during the first anniversary of his failures in Afghanistan… droning an innocent family while putting tens of billions in military hardware into the hands of people who hate us.

That Minor Incursion into Ukraine that Joe said America would not get involved with has blossomed into a six-month-long quagmire costing us untold billions, gutting our military resources, and destabilizing Europe’s food and energy supply and elsewhere.

China is licking its chops over Taiwan.

Iran is plotting the murder of US citizens and trying to steal US tech while Joe prostrates our nation to Iran, begging them to please, PRETTY PLEASE, sign that nuclear deal.

Our economy is in shambles… and our energy policy will only worsen it. People are getting hammered by inflation. And we have had every reason to believe that even working people here will soon be making hard choices between medicine, food, and fuel.

There is growing evidence — including whistleblower testimony — that the FBI has become a political cudgel to be used against Republicans. Mar-A-Lago and instructions to treat concerned parents as terrorists and references to patriotic symbols and the Second Amendment as evidence of ‘extremism’ confirm that claim.

And where would we even begin with the border?

Everything he touches turns to crap — because he has embraced garbage policies.

There is increasing evidence of corruption and impeachable offenses right at the very top of this administration.

Every other day (or so it seems), another Hunter Biden laptop story shows even greater entanglement with foreign governments and pay-for-play — especially China.

Every other day (or so it seems), Joe loses another battle in court where his authoritarian policies are struck down for being unconstitutional or otherwise beyond the lawful scope of his powers.

No less an example of MAGA radical Republican than Nancy Pelosi has gone on record not so long ago saying that the President has no power to push loan forgiveness — but he did so anyway. This potentially put American taxpayers on the hook for somewhere between hundreds of billions or even a trillion dollars in new debt.

Hundreds of people are dying of fentanyl every single day. They are dying because he is not enforcing the border. It won’t be too many more months before the fentanyl poisoning deaths during his time in office will resemble the number of Covid deaths Joe once said should trigger Trump’s resignation.

You will notice that when Joe had more COVID deaths under his watch, the media never posted that handy-dandy death clock on their 24hr news channels.

He is gutting the military, making it an appendage of the woke wing of the DNC… to the point of firing veterans who refuse to get a Jab whose effectiveness even the CDC no longer claims to be superior to natural immunity.

He’s throwing haymakers because he’s afraid of being KO’d. And if he loses the House or Senate, he has a LOT of explaining.

All we gotta do is stay in the fight and outlast him when they use all of their buddies to demean and destroy us.

You can do this. But it will look an awful lot like work.