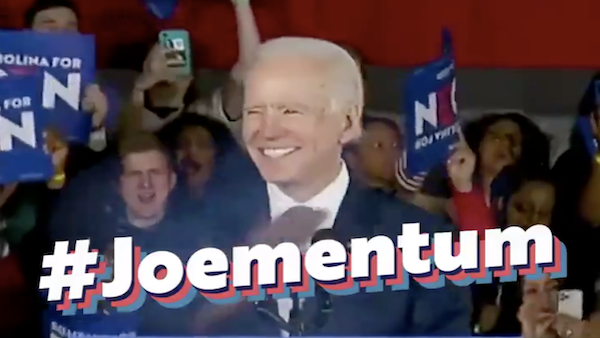 Team Joe thought that they were clever with their “Joementum” hashtag. But there are some even more creative people out there who make some fantastic memes.

Joe Biden’s campaign is desperately trying to prop up a stumbling, fumbling, confused, and creepy former Vice President who is taking his third shot to clinch the Democratic nomination.

But they think that they might have managed to find a clever hashtag that would get their candidate to not look like the confused, doddering old man with one foot in the grave — a play on the word “momentum” with Joe’s name attached to it.

The #JoeMentum hashtag was being used alongside the hashtag #JoeMentia.

#JoeBiden winning #SuperTuesday is a result of the entire #Establishment coalescing around a walking, talking disaster. Is it #JoeMentum or #JoeMentia ?

Biden in the last 72 hours. pic.twitter.com/22slON4ynY

The Biden camp seems to be really fond of it, though.

After Sleepy Joe’s surprisingly good showing on Super Tuesday, his campaign created a new “Joementum” video. This one a clip of Joe saying, “I ain’t dead and I’m not gonna die” which they ended by dropping down his signature aviator shades on him.

It was quickly mocked by meme-makers who found other clips of Joe worked just as well in that format.

In response to Joe Biden's official meme campaign for #Joementumhttps://t.co/EymOAdjOTJ

Here’s the problem with Joe’s claim that he “ain’t dead and isn’t going to die” — at the end of January he had said on the campaign trail that his choice for Veep is really important because he’s “an old guy.”

.@JoeBiden: "Whomever I pick” for VP, must “be capable of being president, because I’m an old guy — no I’m serious!” pic.twitter.com/WGnGkNnghI

Do you know who doesn’t seem old?

He even says so himself — he’s a young, vibrant man.

What would a Biden administration look like? President Trump has been addressing that in his recent appearance at CPAC and at a rally in North Carolina.

He said that if Biden wins, he’d be put in a home and watch TV while young radicals would run the country.

President Trump says if Joe Biden becomes President, he will be put “into a home” and other people will be running the country for him. pic.twitter.com/9hW4kddbB4

Biden has been making deals all over the place including with Preachy Pete and magic dirt-eater Beto. Do you think that either of them would let a career politician who doesn’t even know what state he’s in or the most memorable line in the Declaration of Independence to run things? Probably not.

Maybe Sleepy Joe should be concerned about the deals that he’s making to beat Bernie.