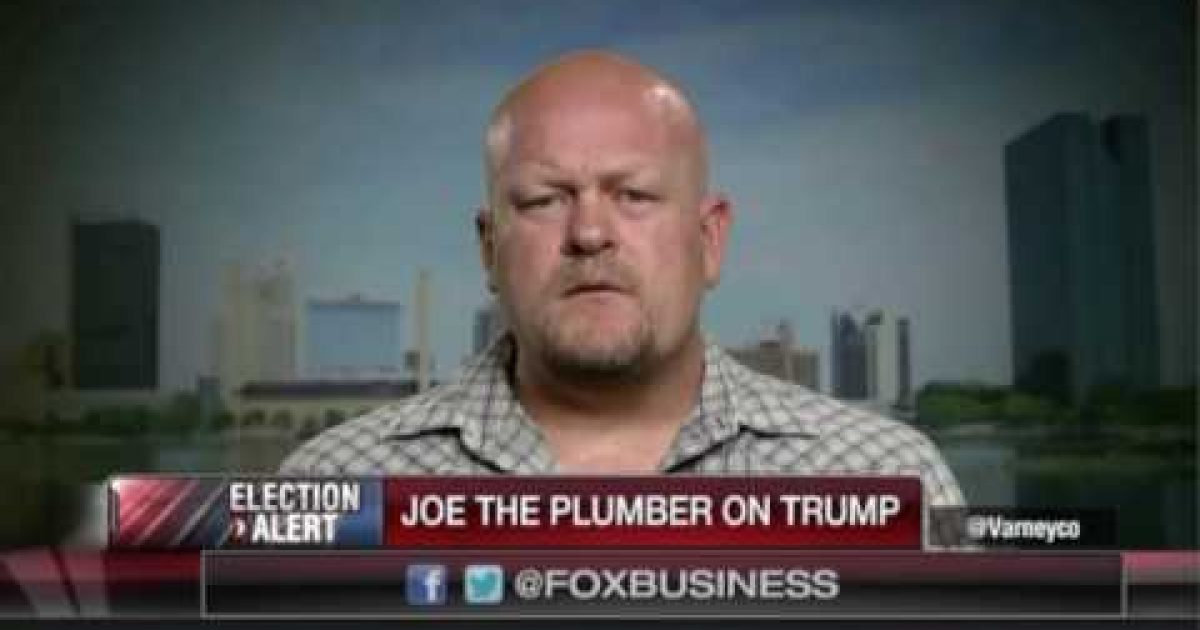 Friday on the Fox Business Channel, Joe “The Plumber” Wurzelbacher made the case for supporting Donald Trump for President over Hillary Clinton and along the way, did something few have accomplished.

WATCH BELOW and take a look see for yourself why that happened:

Fox also felt compelled to Tweet out what got Varney laughing…

But in all seriousness – isn’t Joe right? Where are the jobs that Hillary has created outside of government and pantsuit stitchers? The fact is, they don’t exist and why on earth should a union worker vote for Hillary?

Does a union worker want more illegal immigration? No, because as Wurzelbacher correctly states, illegal labor suppresses ALL wages, including that of the union worker.

Does a union worker want more government spending? No.

Does a union worker want more taxes on business? Doesn’t that cut into wages? Yes.

For those of you unfamiliar, during the 2008 presidential campaign, Wurzelbacher made headlines when he asked Obama about his small business tax policy. During a videotaped exchange, Obama answered in part by saying, “when you spread the wealth around, it’s good for everybody.”

Breitbart recently posted an op-ed by Wurzelbacher explainging his specifics for supporting Donald Trump and even taking on the religious community:

I’ve been supporting and promoting Donald Trump for President for a long time — whether it’s on the road, or on JoeForAmerica.com — where we say; “It’s not about right and left. It’s about right and wrong.” Never has this rang so true for us.

First, let’s get this whole Bernie Sanders thing out of the way: He is not going to be the nominee, he was never going to be the nominee, and even if a house falls on Hillary Clinton (there is precedent), the DNC will find someone to nominate whose name is not Bernie Sanders. And please, stop yourself when it comes to Joe Biden or Elizabeth Warren, okay? Pretty sure Joe doesn’t really know where the White House is and Ms. Warren is wrapped up in that FBI investigation for having a private smoke-signal system installed in her house… but I digress.

Also: I don’t want to discuss brokered conventions, Mitt Romney, or any of this Libertarian, third-party nonsense. It’s Trump vs. Hillary, okay? End of story.

Donald Trump has done something which I’ve been waiting to happen for a long time: He’s won the Republican nomination for president virtually without spending a dime and saying whatever he wants without regard for approval whatsoever from Republicans, Democrats, Independents, Academia, or the politically correct press. When you read how Trump can’t beat Hillary, keep in mind you’re hearing it from the same people who scoffed down their smug noses that he could not possibly win the GOP nomination, either.

They piously labeled his campaign a reality show, a shameless plug for the Trump brand, or a joke. Then these same mystics assured you he would never win a thing after Iowa because he couldn’t prevail with his “style.” They are now stating unequivocally: Trump can’t win in November. I don’t believe that and never have. From the jump, I believed it when Trump said he hadn’t even started in on Hillary. That is a long time coming, my friends.

Fact is, Hillary Clinton hasn’t been called out on anything over the past 25 years, really. She hasn’t been challenged by the leftist press, by Republicans, or anyone on her laundry list of lies, transgressions, and criminal behavior.

“I support Donald Trump to try and restore us first to sanity, then back to greatness.”

(cross-posted from Joe For America)