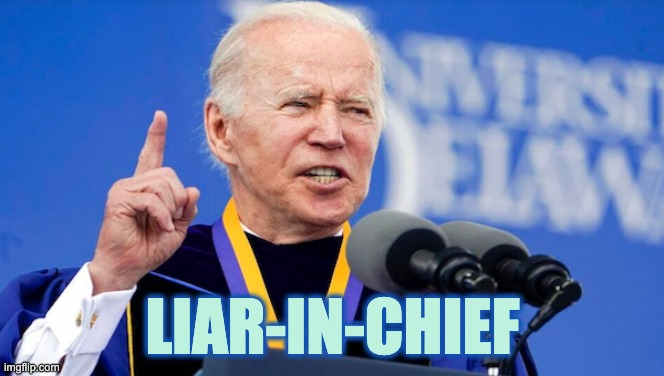 Joe talked of tolerance while lying

It seems that Joe believes “unity” means vilifying anyone that disagrees with him.

On Saturday, President Joe Biden addressed the graduates at his alma mater, the University of Delaware. His nearly 30-minute speech was reported by some in the media as a speech where he urged “tolerance” toward those you disagree with.

President Joe Biden told the University of Delaware graduates to be tolerant and see people who disagree with them as neighbors rather than enemies.

Speaking to more than 6,000 graduates, and with the nation mourning victims of two mass shootings in as many weeks. Biden lamented the division and hatred in the country he governs. He bemoaned a ‘crisis of faith’ in US institutions and he pressed graduates to work to bind up the country’s wounds.

Biden told graduates to remember that ‘democracy is a human enterprise.’

‘We do many things well,’ the president said. ‘Sometimes we fall short. That’s true in our own lives. It’s true in the life of the nation. And yet democracy makes progress possible. And progress comes when we begin to see each other again not as enemies but as neighbors.

Yeah… no. That’s not exactly what he did.

In typical Biden fashion, at around the halfway point in the speech, he implied that two police officers were killed by “insurrectionists” on January 6, 2021.

A mob of insurrectionists stormed the Capitol, the very citadel of democracy. Imagine what you’d be thinking today if you had heard this morning before you got here that a group of a thousand people broke down the doors of the parliament of Great Britain, killed two police officers, smashed and ransacked the office of members of the British Parliament or any other, what would you think? What would you think?

Officer Brian Sicknick, the one officer that died that day, had died of natural causes, as his family has repeatedly said. However, it appears that the deadly violence that day was against unarmed Trump supporters. Ashli Babbitt was shot and killed by Capitol Police, and Roseanne Boyland may have been beaten to death — also by Capitol Police.

Biden has continued to push that a growing segment of the 71 million Trump supporters are racist and violent while insisting that he’s committed to “uniting” the divided country.

But we know that Biden and the truth are only distantly acquainted.

Just before his lies about the January 6 rioters, Joe brought up Charlottesville again as the reason he felt the need to run for President:

Joe Biden is giving a commencement at the University of Delaware. You'll never guess what he's talking about… pic.twitter.com/tQ6acZTAGC

Sure, Joe. It had nothing to do with Hunter’s potential earnings with one grift or another where he’d pass on 10%-50% to the “Big Guy” — or maybe the windfall would be available in the joint bank accounts.

Joe embodies the awful things that the left claimed that Trump was.

He said that the same students steeped in the new racism masquerading as “antiracism” are the tolerant ones, and the people that grew up before are pushing the “old dark forces” of racism and division in America.

“Your generation is the most generous, the most tolerant, the least prejudiced, the best-educated generation this nation has ever known, and that’s a simple fact,” said Biden.

He also pushed the idea (without really saying it) that the GOP is standing in the way of “progress” and, more than that, will be going after voting rights, gay and interracial marriage, and ending democracy as we know it.

“We will not lose the right to vote, the right to self-determination, the right to choose, the right to marry the person you love. We must and will stand together to save the planet and preserve democracy when America is literally facing war with itself,” Biden told graduates.

It’s preposterous, but Biden wasn’t called out on any of it.

He also insisted that progressivism is the only way to go in this “war” in America because “democracy makes progress.”

He also mentioned the two horrific mass shootings in Buffalo, New York, and Uvalde, Texas, and made a hint at a push for gun control “we cannot outlaw tragedy, I know, but we can make America safer.” He called on “all Americans at this hour to join hands and make your voices heard, to work together to make this nation what it can and should be.”

At the beginning of the speech, Biden said that he was teaching at the University of Pennsylvania — but he wasn’t. He was paid almost $1 million to show up at least 9 times (once to promote his book, “Promise Me, Dad”), and he didn’t even have to teach.

He also said that “Doctor” Jill Biden was fluent in 5 languages.

Well, that’s a new one. It could be true, but this is the same guy that plagiarized a UK Labor leader’s speech to craft his own personal history, including, it would seem, his relationship with Jill. If it is true that the good doctor speaks multiple languages, it’s pretty clear that Spanish isn’t one of them.

Perhaps he was confusing her with the former First Lady.

Or perhaps the problem was that Joe was speaking off-the-cuff instead of reading the teleprompter.

But the fact remains that this is the Divider-in-Chief 2.0… or maybe just the third term with the White House “B team.”

Whatever it is, it’s an awful one.

Here is the full speech:

Joe talked of tolerance while lying