From Unsolicited Dating Advice to Dumb Remarks About Gas Prices 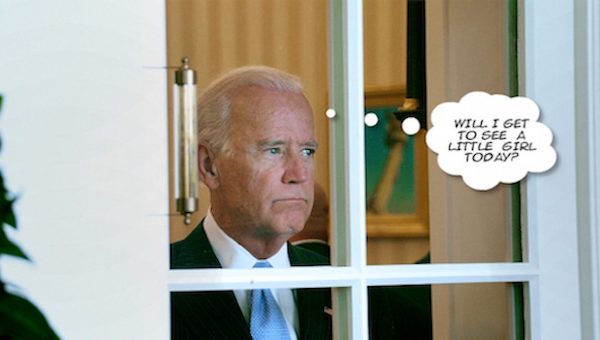 Every day there’s another ridiculous action by Creepy Joe, Stupid Joe, and Dementia Joe. His life is a huge mess, and we’re the victims of it.

Creepy Joe: at an event at Irvine Valley Community college, he once again put his hand on a young girl’s shoulder. This time he told her not to have any serious men in her life until she was 30. That’s several weeks after he called out a woman in the audience of teachers and said that he’d known her since she was 12 when he was 30. He’s an awkward sicko wearing a president suit. While the media just call it “up close and personal,” it’s a  symptom of someone with a problem.

President Joe Biden grabs a young girl by the shoulder and tells her “no serious guys till your 30” as she looks back appearing uncomfortable, secret service appears to try to stop me from filming it after Biden spoke @ Irvine Valley Community College | @TPUSA @FrontlinesShow pic.twitter.com/BemRybWdBI

The Secret Service detachment attempting to stop the man from filming is another example of this administration’s goons trying to cover for him. By now, they should just stop it. He’s a train wreck.

Biden criticized Lynn Truss, the new Prime Minister of the UK, for her plan to cut taxes for her constituents, calling her move a “mistake.” First, it’s none of his business what she does; secondly, he hates ordinary people…and that makes him stupid.

Then there’s his statement about high gas prices in California, which have reached over $6. per gallon to nearly $7: “That’s always been the case here.”

No, Stupid Joe, it’s not always been the case in California. Between his remarks and Commie Governor Newsom, that state is doomed unless something happens to bail them out. And that isn’t likely any time soon.

Thursday’s average for a gallon of gas in Los Angeles was $6.257, according to AAA.

Prices are going back up after Saudi Arabia and the OPEC+ nations agreed earlier this month to cut oil production by two million barrels a day.

When asked by reporters if he had a message to Saudi Arabia, Biden replied, “We’re about to talk to you.” Breitbart

A box of rocks is more intelligent than this idiot. He has literally driven a once close ally into the arms of China and Russia. They know weakness when they see it, and they want no part of it.

Biden is constantly ridiculed for his dementia – he forgets where he is, he tries to shake hands with ghosts, he thinks dead people are still alive, he messes up stories to, even making up a lot of them (it’s called confabulation and people with Dementia or Alzheimer’s do that regularly). Such as telling people that his son Beau died in Iraq when he died of brain cancer in the US. There are many examples of his situation.

Creepy Joe, Stupid Joe, and Dementia Joe are all destroying the United States. Vote red next month to at least get the healing started.