Who Is Running The Country? 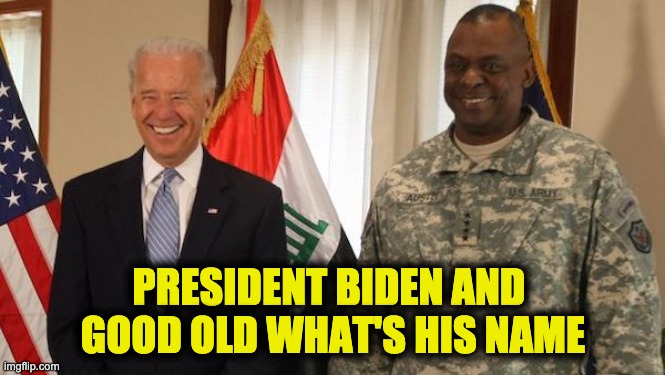 While speaking at an event marking International Women’s Day at the White House on Monday, President Dementia Joe Biden had difficulty remembering the Defense Department and the name of the man he selected to run it, General Lloyd Austin.  Joe Biden’s dementia shows

“So I want to thank you both, and I want to thank the sec… the former general, I keep calling him general but my… my, uh… the guy who runs that outfit over there,” he said. “I want to make sure we thank the secretary for all he’s done to try to implement what we just talked about. And for recommending these two women for promotion.”

Biden concluded, “I want to make sure we thank the secretary for all he’s done to try to implement what we just talked about.”

Austin, who was present for the event, spoke about Biden’s and Vice President Kamala Harris’s celebration of the historic nominations.

“Both of you lead by example, and the example that you set in all things is one of inclusiveness,” Austin said, praising Biden and Harris. “You know that diversity of our nation makes us stronger, and that diversity in our military ranks makes us better at defending the American people.”

Whoops: Biden forgets the name of the Pentagon, as well as the name of his secretary of Defense, Lloyd Austin pic.twitter.com/ZtcgHLBIAO

Whether you agree with Biden’s liberal policies or not, Americans should be frightened about this disturbing trend which became evident during the campaign. One can understand that when Biden forgot Mitt Romney’s name, it may have been intentional. Face it, many Americans try to scrub any memory of mittens out of our heads. Still, at different times he thought Donald Trump was George Bush, forgot the Pledge Of Allegiance, couldn’t remember that North Korea had nukes, couldn’t remember when 9/11 happened, claimed to have negotiated climate change negotiations with dead Chinese Leader Deng Xiaoping, and too much more.

It’s no wonder that Congressional Democrats have asked him to give up sole responsibility for controlling America’s nuclear arsenal, and his handlers cut off his feed during a recent speech to fellow Democrats when he invited them to ask questions.

With each passing day, it becomes more obvious that Joe Biden is losing his mental faculties, and to paraphrase President Biden himself, “this is a big freaking deal,” and raises the question of who’s running the country?  Based on his loss of cranial agility,  it’s difficult to believe that Joe Biden is the one making decisions.