Joe Biden On The View: His Dementia is Becoming More Obvious Every Day 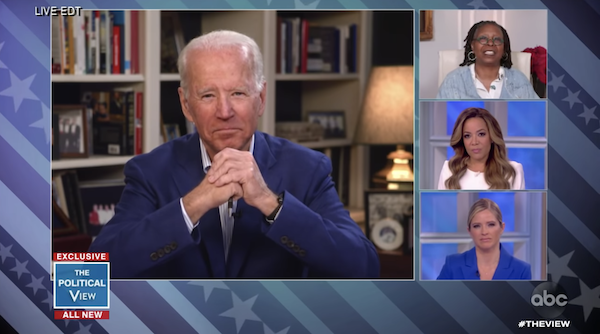 The former SCHMOTUS (Schmo of The United States), V.P. Joe Biden has always been a gaffe meister, but it’s been different lately. He seems to get angry more often, and more than gaffes, there are times he speaks gibberish. Joe was on The View Tuesday, and when he was asked about the current world CoronaVirus crisis, Joe responded with nonsense. He used real words but seemed to mix them up. Joe Biden The View\

As we previewed last week, Biden started giving his own briefings to the press from his home to “counter” President Trump’s daily CoronaVirus commission pressers, keeping Americans up to date. Also from his Delaware home Biden gave a remote interview on The View to share his biggest concerns regarding the virus. Interestingly this was the same program that ripped his response to the H1N1 virus in 2009. Tuesday’s interview didn’t go so well. His phone was ringing in the background, Joe seemed “out of it.”

Co-host Sara Haines asked, “We talked about Trump saying the government would reassess the wrecked period for keeping businesses shut and people at home. Are you at all concerned as Trump said that we cannot let the cure be worse than the problem itself?” Biden answered, “We have to take care of the cure. That will make the problem worse, no matter what. No matter what.

"Are you at all concerned, as President Trump said, we cannot let the cure be worse than the problem itself?"

I can hear the haters now crying that the clip was cut short, but he kept going and didn’t seem to notice his mistake — he actually doubled-down on it. Check out the video below at around the 3:20 mark.

Biden seems to initially say that the shutdown needs to continue to “flatten the curve” but then goes off on a tangent that is unrelated to the economic consequences of a long-term shut-down of business insisting that more testing should be done, more medical gear should be provided, an increased number of hospital beds in cities should be provided, and additional assistance for rural areas that don’t have Intensive Care Unit

He couldn’t seem to follow a simple question about government recommendations that, if they continue, could cause massive job loss, despair, and plunge people into poverty.

It was kind of embarrassing.

The View had him covered, though.  Sunny Hostin, tossed him a softball asking about his sad videos to “counter the misinformation that Trump is putting out.”

He says, “The President has to be instilling confidence in the American people that we know how to deal with this virus.”

But Joe isn’t instilling confidence, Joe seems to be demonstrating his brain is turning to mush.   As far as dealing with a virus issue,

During the 2009 swine flu outbreak, Biden said he would advise his family against traveling in confined places and said when one person sneezes “it goes all the way through an aircraft.” Scientists say that’s not how germs spread. and Obama had to send out his press secretary to clear things up–and couldn’t

Joe Biden will again politicize coronavirus today. But his record on pandemics is one of incompetence.

During the 2009 swine flu outbreak, Biden made reckless comments unsupported by science & the experts.

The Obama Admin had to clean up his mess & apologize for his ineptitude. pic.twitter.com/5TCKZeShkz

Biden caught some heat from the ladies on the view for that gaffe.

WATCH: After Joe Biden botched the response to the H1N1 virus in 2009, the hosts of @TheView criticized his “irresponsible” conduct.@JoyVBehar said Biden "doesn’t remember he’s the VP sometimes"

But in his most recent appearance on The View, he seemed to lose touch with the English language. Biden clearly mixed up “the cure” and “the problem” in his answer, but he didn’t seem to notice, and he continued on as normal. He even doubled down.

This entire campaign season has seen examples of Biden losing touch.  At first, it just seemed like a memory loss, as he reversed positions he had held for forty years on the Hyde amendment and China. Then it started getting weird. He told a touching about going to Afghanistan to give someone a well-deserved medal-that never happened, or his climate change negotiations with dead Chinese Leader Deng Xiaoping, and spent lots of time with Kim Jung Un who he never met. Joe announced he was running for Senator instead of President, said his late son was the Attorney General of the United States. His corn pop story was also strange, as was one of my favorites: when he called a New Hampshire Voter, ‘A Lying, Dog-Faced Pony Soldier.’

Joe Biden claims has has "spent a lot of time" with Kim Jong Un.

That is FALSE Biden and Kim Jong Un have never met. pic.twitter.com/evCJLqEdAz

These aren’t normal gaffs. They are the words of someone desperately needs to hold on to reality. I know how it works. I lost two family members to Alzheimer’s, and my Dad had dementia in his last year of life. I wouldn’t vote for Joe Biden anyway, but watching him deteriorate in public is sad to watch.