Joe Biden Is Now Officially The Lawlessness And Disorder Candidate 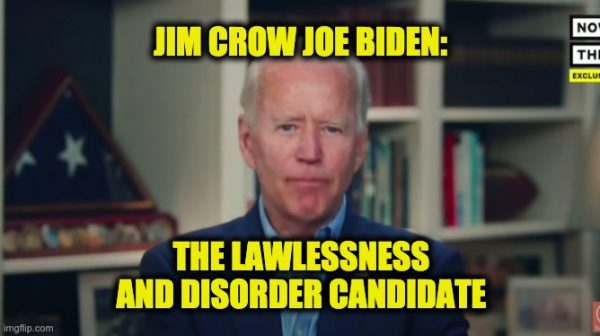 President Trump is the law and order candidate, and now Joe Biden is officially the lawlessness and disorder candidate. On Wednesday, presumptive Democrat nominee Joe Biden told progressive “Medicare For All” activist Ady Barkan that police have “become the enemy” under certain conditions and agreed that some funding needs to be cut or redirected to other things.

He came just short of calling for police to be defunded.

“Surplus military equipment for law enforcement, they don’t need that. The last thing you need is an up-armored Humvee coming into a neighborhood — it’s like the military invading — they don’t know anybody. They become the enemy. They’re supposed to be protecting these people,” he said.

“The idea of no-knock warrants for drug cases is bizarre,” he told Barkan.

“We don’t need that. It just invites trouble. That’s how Breonna (Taylor) was killed. There’s a need for fundamental change in us being able to have transparency, be able to have access to the records of police when they have misconduct charges against them, to be able to know where they are so they can’t go from one police department to the next,” he added.

“That should be held. In my administration that information will have to be made available to the Justice Department and held in a file, so you’ll be able to track this,” he said after Barkan said in no uncertain terms that “America’s commitment to white supremacy” was responsible for the death of Taylor and George Floyd.

“Can we agree that we can redirect some of the funding?” Barkan asked.

A longer version of the video is at the end of this post.

After the Charlottesville riots in 2017, Trump specifically excluded neo-Nazis from his “very fine people” characterization. He said, “I’m not talking about the neo-Nazis and the white nationalists,  they should be condemned totally.”

A recent Trump ad says that America won’t be safe under Joe Biden:

It’s looking as though that’s more true than we know.