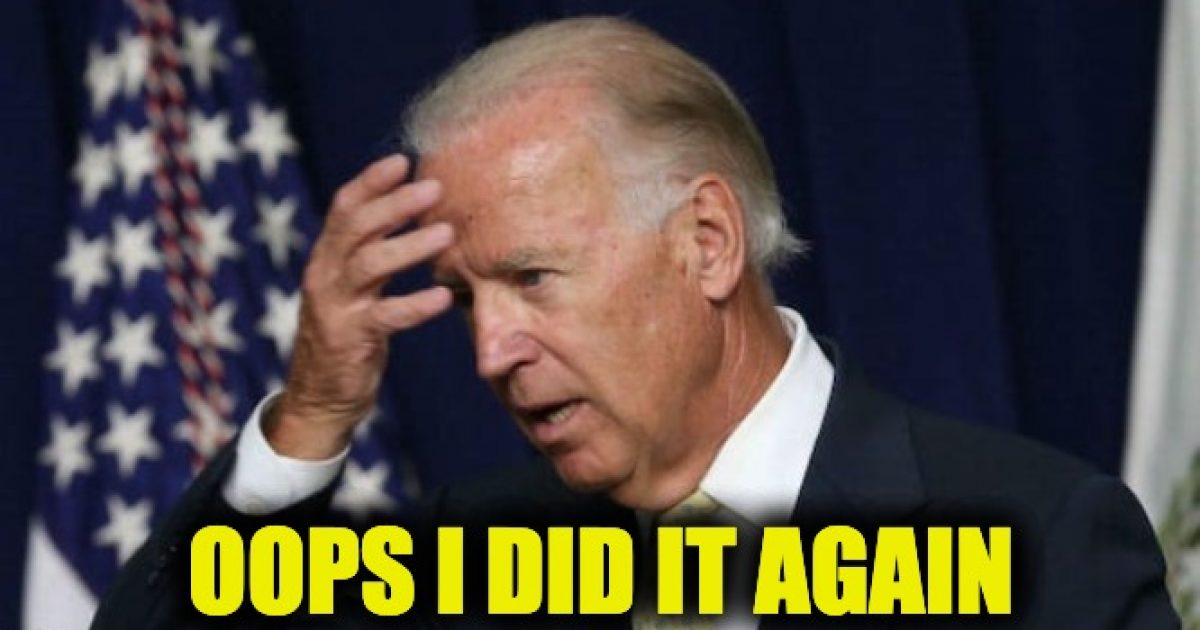 Former SCHMOTUS Joe Biden is at it again. The gaffe meister is making up stories about things he never did with people he never did them with. This time Joe Biden told a touching story of military heroism… but it is an incident that never happened.

Biden told the story last Friday in New Hampshire. Per New York magazine, the text of the Biden tale was:

A four-star general had asked the then-vice president to travel to Kunar province in Afghanistan, a dangerous foray into “godforsaken country” to recognize the remarkable heroism of a Navy captain.

Some told him it was too risky, but Biden said he brushed off their concerns. “We can lose a vice president,” he said. “We can’t lose many more of these kids. Not a joke.”

The Navy captain, Biden recalled Friday night, had rappelled down a 60-foot ravine under fire and retrieved the body of an American comrade, carrying him on his back. Now the general wanted Biden to pin a Silver Star on the American hero who, despite his bravery, felt like a failure.

“This is the God’s truth,” Biden said while telling the story, adding a strange promise: “My word as a Biden.”

God’s truth? His word as Biden? Well, now you know what Biden’s word is worth.

According to the Washington Post, which broke the story almost every detail of Biden’s tale was wrong. Either accidentally or on purpose, the SCHMOTUS took a few real events a jumbled and mixed them up and came up with a beautiful but fake story.

Biden visited Kunar province in 2008 as a U.S. senator, not as vice president. The service member who performed the celebrated rescue that Biden described was a 20-year-old Army specialist, not a much older Navy captain. And that soldier, Kyle J. White, never had a Silver Star, or any other medal, pinned on him by Biden. At a White House ceremony six years after Biden’s visit, White stood at attention as President Barack Obama placed a Medal of Honor, the nation’s highest award for valor, around his neck.

(…)The vice president did pin a medal on a heartbroken soldier, Army Staff Sgt. Chad Workman, who didn’t believe he deserved the award.vIn a statement, Biden’s campaign spokesman Andrew Bates said Workman’s valor was “emblematic of the duty and sacrifice of the 9/11 generation of veterans.”

In the space of three minutes last week, Joe Biden got the time period, the location, the heroic act, the type of medal, the military branch and the rank of the recipient wrong, as well as his own role in the ceremony. From me and @GregJaffe: https://t.co/hFrBCXWEXN

There is a bright side to this. At least Connecticut Senator Blumenthal didn’t claim to be the hero soldier in Biden’s tale.

Biden has been getting a lot wrong lately including the claim that he was VP during the Parkland HS shooting and the decade the assassinations of Bobby Kennedy and Martin Luther King Jr, happened. And during a CNN Town Hall, he seemed to forget Barack Obama’s name (something most Republicans are trying to do). Biden has assured voters that he is not losing his mind, but that seems to be another Biden gaffe.